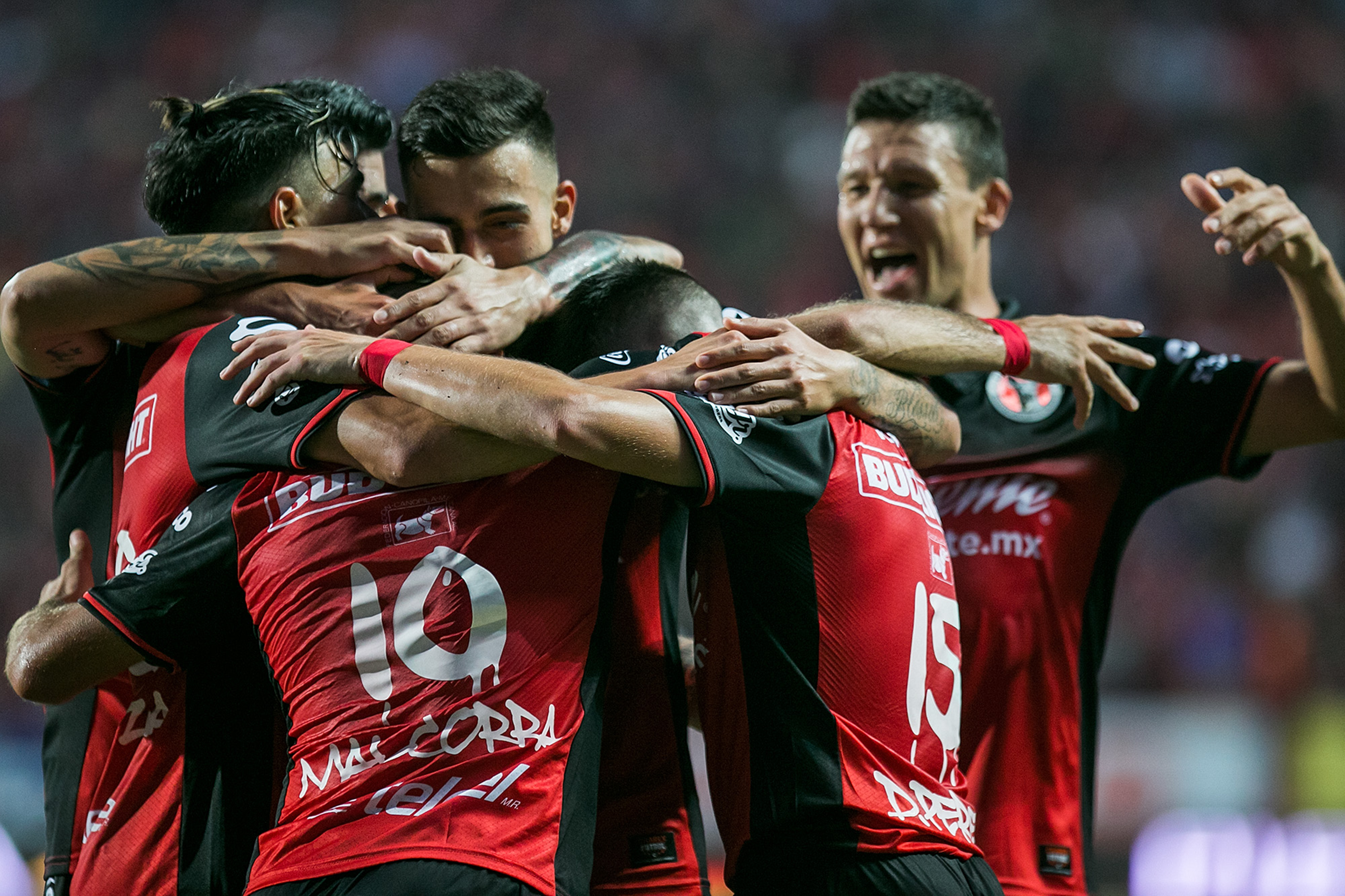 After one point from a possible 12 with four-at-the-back, Tijuana have since won three matches on the trot since switching to three centre-backs.

Why has this formation switch been so successful? With the help of statistics from Sofascore and SoccerNurds, Tom Harrison has some answers.

Another man to prevent counters

Eduardo “Cacho” Coudet has adopted a somewhat similar tactic and style to that employed by Javier Torrente at León. The main idea is to exploit transitions as much as possible.

Transition, specifically winning the ball, is often the easiest occasion to breakdown and play through opponents as it takes time for the other team to shift from their attacking shape to their defensive shape. Defensive players are often found out of position, and if the ball is moved quickly and effectively, plenty of joy can be found through these transitions, or counter-attacks.

In order to create and exploit transitions, Coudet has adopted a high-pressing style with Tijuana, and gets his side to quickly play direct when they win the ball. Playing direct requires higher risk-taking than playing short, and therefore results in a lower pass efficiency.

Evidence for this style comes from Tijuana’s pass statistics. Los Xolos have attempted the third highest number of passes per 90 minutes this season, showing that their high-pressing style is offering them plenty of opportunities to pass the ball, but Tijuana are ranked just tenth for pass accuracy.

With the two full-backs pushing forward, Tijuana were often left with just two centre-backs and holding midfielder Damián Musto to deal with quick counters, which became a problem, especially when they faced Monterrey, a superb counter-attacking side.

Bringing in a third centre-back means that Xolos have an extra defender staying back to prevent counters from turning into threatening opportunities. The extra man particularly helps when opponents move the ball out wide during transitions, as the wide centre-back can shuffle across without the defence being pulled too far apart.

Why are Chivas struggling?

Helped by stats from @SofaScore & @soccernurds, I have some answers #ligamxeng

The switch from a 4-2-3-1 to a 5-3-1-1 has been especially beneficial for Víctor Malcorra, who’s been able to move in from the wing, into the left ‘half-space’ (between the centre and wide area), in the knowledge that wing-back Damián Pérez will provide width.

Malcorra, who’s ranked third for most key passes this season, is Tijuana’s main creator, so getting the Argentinian into a more central role, where he can get on the ball more and has 360 degrees of passing options, can be of major benefit for Xolos.

Also, Luis “Quick” Mendoza has come in to the side, playing off Gustavo Bou in attack. Quick is the flashiest of attacking players, but is intelligent, and has picked up three assists from just four starts.

As well as bringing in another defender to deal with counter-attacks, or counter counters as they could be described, Coudet has also got his Xolos side playing a bit safer when in possession.

Pass accuracy has increased from 75% to 82%, although it should be acknowledged that Tijuana spent parts of two of those matches playing against ten men, and adopted a more patient approach as a result. The fact that Tijuana have played against ten men in two of their three games with three centre-backs is very important to remember, as it helped them gain victories in those matches.

Xolos have also reduced the number of crosses that they attempt, dropping from 19 per game (then third highest in the league) to 11.67, and have dramatically improved their long ball success rate from 43% to 66%.

Furthermore, Tijuana have improved their success rates in terms of duels and dribbles. The improvement in dribble efficiency has been particularly impressing, rising from 46% to 63%. 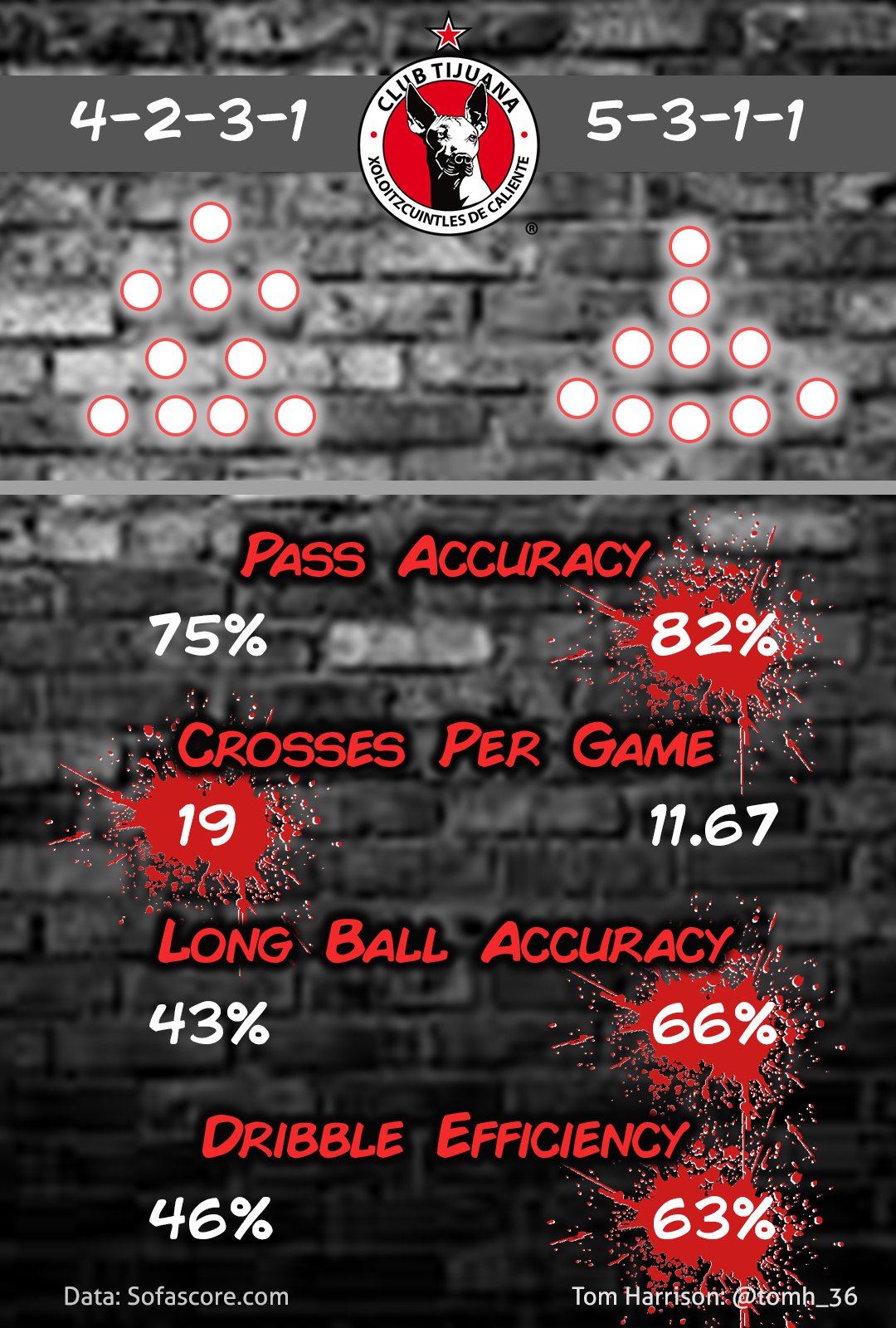 New signings raise questions over the future of this formation

Xolos have brought in two big names late in the transfer window, Juan Iturbe and Miller Bolanos. It will be interesting to see how these players are used by Coudet, and if they are fitted into the starting line-up.

Bolanos’ potential position is obvious, replacing Quick Mendoza as the ‘number ten’ off Gustavo Bou, whether that be in a two or three centre-back system.

Iturbe, traditionally an out-and-out winger, is more of a conundrum. Coudet could bring in Iturbe to play on the right side of the midfield three, but this would be a risky solution, leaving Tijuana without much defensive cover in midfield. Perhaps we’ll see a return to the 4-2-3-1, with a line of Malcorra-Bolanos-Iturbe behind Bou, and ahead of a double-pivot including Musto and one other.

This, however, would potentially bring back the problems Tijuana faced during the first four games of the season. Hence why the addition of Iturbe provides such a conundrum for Coudet.

Why Are Chivas Struggling?
Monterrey: Breaking Down the Liga MX Leaders
To Top