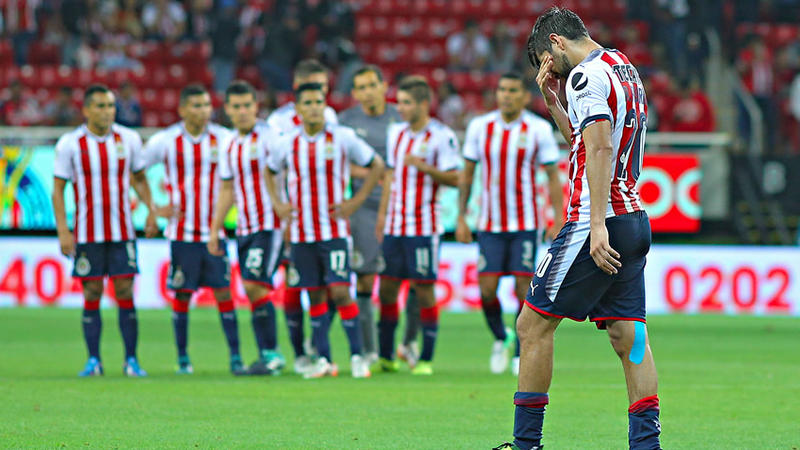 With a complete absence of new additions, important squad players like Néstor “Avión” Calderón and Miguel Ponce leaving, injuries, and players on Gold Cup duty, many thought Chivas would find the start of the 2017 Apertura challenging. Very few thought they’d be yet to win after seven games though.

Chivas’ problems are rooted in the regularity that they lose possession, and their poor success rates across multiple facets of the game.

Matías Almeyda’s side have been dispossessed more times than any other team, have the second lowest duels win rate, the worst dribble success percentage after América, and the fourth worst cross accuracy.  Chivas do have the third highest passing accuracy in Liga MX, but this isn’t enough to make up for how often they lose the ball through other methods.

Rodolfo Pizarro and Carlos Fierro have been particularly guilty of losing possession far too often. Both players have won less than 30% of their duels, with Pizarro having been dispossessed, losing the ball when not attempting a pass/dribble/etc.., a league-high 31 times. To put this into context, the whole Toluca squad have been dispossessed at total of 51 times this season.

With his 63% duel efficiency, and 67% dribble and 33% cross success rates, Javier “Chofis” López currently appears to be a much better alternative. Chofis has also made more key passes than either player, in fewer minutes on the pitch.

Efficiency at either end

Another major issue for Chivas this season, and reason behind their struggles, is their poor efficiency in front of goal. The Guadalajara side have the fifth worst shot conversion in Liga MX, averaging almost 11 shots required to find the back of the net. Ángel Zaldívar has actually done quite well in this regard, with a better shot conversion than the likes of André-Pierre Gignac, Raúl Ruidíaz and Nicolás Castillo, although one of his two goals was a penalty.

Shot conversion is the one area where Rodolfo Pizarro has excelled this campaign, scoring two golazos from four shots. But does that make up for his regular possession loss and lack of creativity? Considering that Chivas have managed 1.1 fewer shots and 0.6 less shots on target per game than the Liga MX average, perhaps not.

Alan Pulido has been greatly missed by Chivas. Pulido was an effective all-round forward last season, as statistics suggest. Pulido ranked inside the top ten for distance travelled per game, made the highest number of dribbles per 90 for out-and-out strikers, and held a 77% pass completion rate, high for a forward.

It’s not just in attack where Chivas have statistically declined in comparison to last season. Rodolfo Cota had the highest save percentage in Liga MX in the 2017 Clausura (excluding penalties conceded) at 81%. That percentage has dropped to 73% this season.

Orbelín- Out of position and out of form

It’s remarkable how Orbelín Pineda stepped so easily into a key role at one of Mexico’s biggest clubs. With his all-round talents, Orbelín is capable of dictating the play for Chivas.

Normally Pineda is used in a “number eight” role, but in his previous five Liga MX matches he’s played as a “number ten”, with two holding midfielders (two of José Juan Vázquez, Carlos Salcido and Michael Pérez) behind him. Playing in a more advanced role means Orbelín is operating in a more congested area of the field, reducing his time and space, and likely meaning he sees less of the ball.

Stats show that playing further forward hasn’t benefited Pineda’s game. His efficiency in terms of duels won, passing, long balls and dribbles have all dropped, with dribble success rate dropping by almost 20%. Orbelín has also made fewer key passes, tackles and interceptions per game. Orbelín Pienda has been worse this season than last in almost all facets of the game, much of which may be down to his position, although fatigue after coming straight from the Gold Cup could have played a part.

Is Dieter Villalpando the most underrated Mexican player?

The nature of Liga MX means that even though Chivas haven’t won any of their seven matches this season, the play-offs are still within touching distance. The goats are just five points off eighth place and could comfortably make it into liguilla if they turn around their form for the remainder of the season.

Matías Almeyda will have to do some excellent work for that to happen though. The Chivas coach must reduce the regularity at which they lose possession through dribbles, crosses, duels and dispossessions, and must find his strongest line-up. Orbelín’s major reduction in form suggests he should be moved back to a “number eight” role, although this leaves Almeyda needing to bring another attacking player in, when players like Carlos Fierro, Rodolfo Pizarro and Isaác Brizuela have been struggling. One thing’s for sure, Chofis López must start in one of those positions.