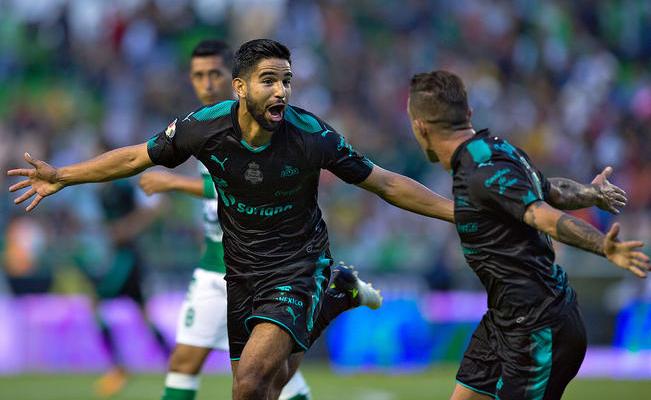 That ends #Jornada7, in case you missed any of the action. Here are all the results from the round. ⬇️⬇️⬇️#LigaMXEng
?@LIGABancomerMX pic.twitter.com/DAfICc3N0v

Performance of the week- Santos Laguna

León have been improving lately, winning two of their last three matches, so to gain the victory away from home was impressive, and much-needed for Santos.

José Manuel “Chepo” de la Torre’s side took the lead in the tenth minute of the match, with a classic Santos goal. Gael Sandoval sent a dangerous cross into the box and Julio Furch made the most of the miss-match at the far post against full-back Osvaldo Rodríguez to put Santos ahead.

In an open first-half, there were chances at either end, with Sandoval almost doubling Santos’ advantage as he hit the bar from outside of the box.

León halved the deficit in second-half through Mauro Boselli, and should have equalised via substitute Maxi Ceratto, but Santos held on for a vital victory. The three points meant that Santos don’t go into the first international break bottom of the table, and instead are just three points off eighth.

The defeat was the nail in the coffin for Javier Torrente, who’s pressing style was so effective in the short-term, but couldn’t be replicated after the 2016 Apertura.

After tonight's defeat, @clubleonfc announce that they have parted ways w/ Javier Torrente as DT. #LigaMXEng

Another case of a team’s fortunes dramatically changing in a short space of time. Tijuana earnt their third league win on the trot with a two-one win against Pachuca.

Los Xolos were handed a fantastic opportunity to gain the three points when Víctor Guzmán was shown a straight red card in the 13th minute. Guzmán deserved to go for his high, studs-up challenge, and it will be a major disappointment for the young Mexican, seeing as he’s scored four goals and picked up an assist in his previous two matches.

With a man advantage, Tijuana made the match extremely difficult for Pachuca with their tactical approach.

Like how Tijuana are playing v 10. Pressing quickly when they lose the ball, and a more patient approach (86% pass completion) with it.

Xolos were patient in possession, completing 84% of their passes, significantly more than their average of 79% from across the campaign. Eduardo “Cacho” Coudet’s side could be criticised for being a little slow in moving the ball at times, but they still looked to play direct and penetrate at times. Their 68 attempted long balls is above their average number for across the season.

What Tijuana did extremely well was to regularly press Pachuca immediately after losing possession. This was often possible due to their overall numerical advantage. It prevented Los Tuzos from launching counter-attacks, as they weren’t able to quickly play forward with multiple opponents around the ball, and gave Tijuana the opportunity to exploit Pachuca’s lack of organisation if Xolos did win the ball back quickly.

Tijuana’s first goal, finished by Gustavo Bou after Matías Aguirregaray’s cross, was scored just a matter of seconds after Xolos won the ball back in Pachuca’s half.

Tijuana sat back too much at the beginning of the second-half, allowing Pachuca to have 47% possession in the second-half at the time of Joaquín “Shaggy” Martínez’s equaliser. Diego Alonso’s side only saw 38% of the ball across the 90 minutes.

Coudet pushed for a winner with a string of attacking substitutions. Juan Iturbe came on for his debut, whilst Joe Corona and Henry Martín replaced defenders. The risky switches paid dividends thanks to a late moment of magic from Damián Musto, who scored a brilliant chilena.

After one point from a possible 12 with a four-at-the-back formation, Tijuana have won nine from nine with three central defenders. Coudet’s side are right in the play-off mix now.

Necaxa may once again be the surprise package

Necaxa were the biggest over-achievers last Apertura, as the then-newly promoted side made it to the semi-final stage. This campaign, Los Rayos are on their way to once again become the surprise package, with 12 points from seven games so far.

New signings have been important in Necaxa’s impressive campaign so far. In attack, Carlos González has two goals and has won the second highest number of duels in the league, suggesting how important the target man has been in winning aerial balls and holding-up possession.

At the other end of the field, Igor Lichnovsky has perhaps been the signing of the season. After six matches, Lichnovsky had made the highest number of interceptions in Liga MX, and his 66% duel win rate and 89% pass efficiency displays how scarcely he gives away possession.

Young Ricardo Alvarado, brought in from Pachuca, showed he can make an impact with his winning strike against Atlas, which was Alvarado’s debut.

There have also been good runs of form for some longer-term Necaxa servants. Xavi Báez has put in all-round good performances in midfield, displaying both creativity (1.3 key passes per game) and defensive talents (2.4 tackles per game). Jesús Isijara, who was fantastic in the 2016 Apertura, but barely made an impact in the Clausura, has re-discovered near to his best form. Two goals and 1.7 dribbles per game for the right-winger.

However, there are still questions over whether Nacho Ambríz is fielding his strongest possible line-up. Pablo Velázquez is arguably not the right man to play alongside Carlos González, as both are target men and lack mobility. Dieter Villalpando has also been poorly used so far this season, out wide or as a ‘number ten’, rather than in central-midfield where he excelled under Sergio Bueno at Chiapas.

Necaxa aren’t the most attractive or most dangerous side going forwards, but with Igor Lichnovsky joining an already solid defence, they look very tough to beat. If Ambríz can find a line-up that causes more problems in attack, Necaxa can surprise a few and go far this season.

Liga MX Apertura 2017 Guide: Where to Watch Jornada 7
Why Are Chivas Struggling?
To Top