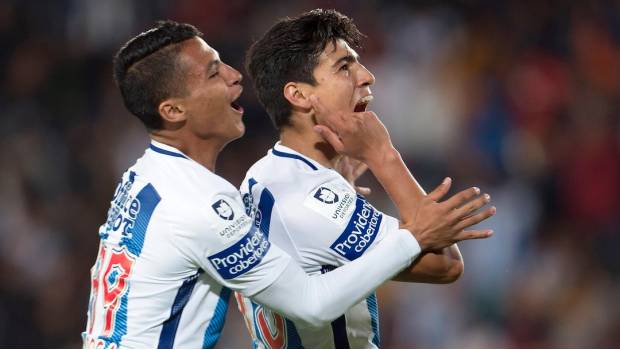 #ICYMI#Jornada4 sprung a few surprises. Did your team do well enough to be one of them? ? ⬇️⬇️⬇️#LigaMXEng

The reaction from Diego Alonso when the full-time whistle blew at Estadio Hidalgo said it all. This was a massive win for a Pachuca side that have under-performed for a while in Liga MX.

Los Tuzos hadn’t scored in eight of their last 11 Liga MX matches, and Alonso has been struggling to find his strongest line-up.

On Saturday, he once again went with youth over experienced attacking players. Erick Aguirre played at left-wing, leaving Edson Puch on the bench, despite left-wing being far from Aguirre’s strongest position. Víctor Guzmán was also used out of position, yet again. Alonso must have a lot of faith in Guzmán to keep selecting him at attacking-midfield when he’s put in consistent un-influential displays there.

This, combined with the failure to replace Guido Pizarro so far, and an unusual lack of organisation at the back at times, was taken advantage of by Pachuca.

Both goals were impressive one-on-one finishes following a through ball being slipped in-between the Tigres back-line.

Pachuca were pegged back from the penalty spot after Ángel Sagal had displayed quality movement off-the-ball, balance and clinical finishing for the opener. But they found a 79th minute winner.

Captain Erick Gutiérrez had produced a fantastic performance, and he grabbed the winner, latching onto Jonathan Urretaviscaya’s through ball and controlling his finish on the slide.

Gutiérrez had become more of a deep-lying playmaker than a player who can get forward and support the attack under Alonso, but this was a Guty display of old. With his three successful dribbles, two key passes, and vital winner, Guty reminded everyone of how effective he can be in the final third when given the license to push forward.

This goal really could prove vital. Pachuca needed a confidence-boosting victory and beating star-studded Tigres is perhaps best way to gain confidence in Liga MX. It should be a more positive mood at Pachuca as Keisuke Honda prepares for his debut.

Performance of the week: Monterrey

Veracruz did extremely well to win at Estadio Corona. Querétaro produced perhaps their best performance under Jaime Lozano when beating Morelia. But, for the second week running, performance of the week has to go to Monterrey.

Los Rayados fell behind to Chivas in just the third minute, but tore the champions apart for much of the rest of the encounter.

Like last week’s victory at Tijuana, it was Monterrey’s direct counter-attacking style which paid dividends. Antonio “Turco” Mohamed’s side held 41% of possession, but out-shot Chivas 17 to 9, with 13 of shots coming from inside the box.

Dorlan Pabón and Avilés Hurtado once again proved very difficult to mark, and the Colombian duo were extraordinarily efficient at creating opportunities when they got possession. Pabón got a goal, two assists, and made five key passes, despite completing just nine passes in his 80 minutes on the pitch. Hurtado also made just nine passes, but won the penalty which Pabón dispatched on the rebound, and scored a header.

Rogelio Funes Mori crucially got himself on the score sheet, ending a nine game drought in Liga MX, and was pivotal to Monterrey’s style. Funes Mori was used as the target man to hit, and launch rapid attacks from. The Argentine attempted 25 passes, the joint highest amount in the Monterrey side. It’s very rare to see a striker attempt as many passes as anyone else in the team.

Pabón-Hurtado-Funes Mori had the potential to be a phenomenal force in Liga MX, and that’s exactly what the trio are becoming. Opposition coaches are going to have to find a method of stopping them. Not an easy task.

América finding wins, but yet to find their strongest line-up

Club América picked up their third consecutive victory on Friday against Atlas, with a late penalty giving Las Águilas the three points for the second week in a row.

The Pumas match was even, whilst Atlas dominated the second period at Estadio Jalisco.

América were fortunate to be gifted an opportunity to grab victory against Pumas, as a result of Nicolás Castillo’s mindless handball. And, on Friday, Miguel Herrera’s side were once again fortunate to benefit from a lapse of concentration from an opponent. Daniel Arreola didn’t need to push Edson Álvarez over, as Miguel Fraga was able to punch the ball away, but Arreola did, and Oribe Peralta punished him.

This wasn’t the only slice of luck to come América’s way towards the latter stages of the game against Atlas. Milton Caraglio’s penalty was very poor, and Las Águilas came into the game late on when Clifford Aboagye went off injured.

The fortune that América have enjoyed must be acknowledged, as it shows there’s plenty of work to be done. In particular, there are questions over the current starting line-up.

3 wins in a row for América, but have they found the right system? #ligamxeng pic.twitter.com/lqt4QL4vGQ

With Guido Rodríguez such an outstanding reader of the game and ball-winner, there doesn’t appear to be a need for another defensive-midfielder. Perhaps Mateus Uribe, more of an all-round midfielder, will prove a more useful starter.

Meanwhile, the strike partnership of Oribe Peralta and Silvio Romero continues to struggle. Romero has had an extremely poor start to the season and surely won’t remain in the starting Xl for much longer. With Diego Lainez and Renato Ibarra on the bench, América can easily switch to a 4-2-3-1, or Piojo could change to his old favourite three-at-the-back, by moving Edson Álvarez into the defence, where he should be more influential.

Not the most impressive start for Piojo Herrera back at América, but with a fair bit of fortune, they’ve crucially got points on the board, and can now afford to experiment a little in order to find the strongest starting line-up.

Stat of the week

One of my favourite stats:

The Wiseguys Guide to Liga MX: How Mexican Futbol is used to Launder Money
Liga MX Apertura 2017: Where to Watch Jornada 5
To Top