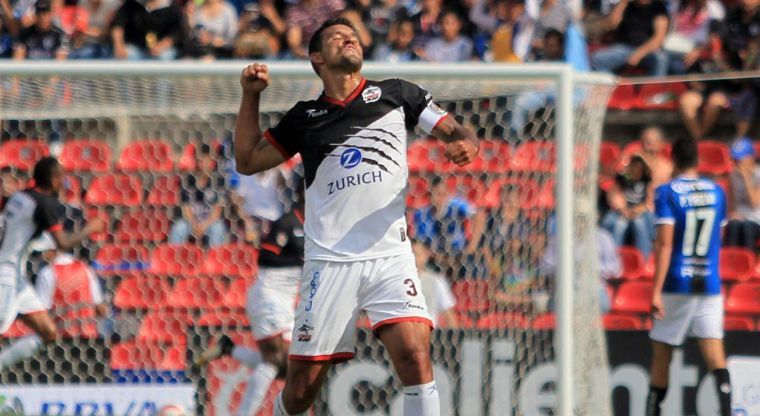 Performance of the week: Lobos BUAP

With their home game against Santos not being televised, Lobos BUAP’s match against Querétaro was the first opportunity that the majority of fans had to watch the newly-promoted side in action.

Most of the attention was on Cruz Azul-Chivas at the time of Lobos’ game, but those that checked out the Puebla side were treated to a significantly more entertaining match, as Lobos produced a superb display to beat Querétaro four-nil.

As expected, Lobos lined-up in a 3-4-3 formation, and there was plenty of ambition and fluidity to their style.

Wing-backs Heriberto Olvera and Luis Advíncula were given the freedom to push high up the field when in possession, and they caused Querétaro plenty of problems. Their presence in BUAP’s wide areas gave an out-ball when the play became congested in the midfield, created opportunities for crosses, and increased space in central areas by making the pitch as wide as possible.

It was the job of front three Amaury Escoto and Luis and Julián Quinones to exploit the space in the middle. These three appear to have been given even more freedom that the wing-backs, regularly popping up in different parts of the pitch. Julián, the younger of the Quinones brothers, led the line, but often dropped in to get on the ball.

Impressive when in possession, Lobos BUAP backed this up with class in the final third, as they turned four past Tiago Volpi.

Every goal was classy. Julián Quinones’ header to give Lobos the lead was incredibly well-placed, whilst Maza Rodríguez’s header came from a clever, quick free-kick, taken by Juan Carlos Medina. Medina scored the third, with a brilliant volley, before substitute, and prolific Ascenso scorer, Diego Jiménez, chipped Volpi on the counter late on.

Lobos’ day was made even better by Lucero Álvarez’s remarkable penalty save with his trailing leg. Although he picked-up an unfortunate eye injury late on.

Overall, it was a remarkably fluid performance for a side that contains so many new additions. Tougher challenges than Querétaro lie ahead, but if Lobos BUAP can keep up this form, we’ve got a relegation battle to look forward to this season.

Lobos BUAP have done a great job at replacing the Chiapas-shaped hole in #ligamxeng today. They've put a big smile on my face.

Cecilio Domínguez has quite a challenge to live up to the hype created after his impressive performances when fit last season. On Saturday, he went above and beyond that hype.

The Paraguayan scored both of América’s goals at Estadio Hidalgo, one in each half.

The first was well-executed header, low and into the corner, giving Óscar Pérez very little chance of making a save. The second displayed Cecilio’s composure in front of goal, as he placed his volley past Pérez after Carlos Darwin Quintero had seen the ball cleared off the line following a superb run into the box.

We're seeing how Darwin Quintero can be useful for América tonight. Don't expect consistency, but he can produce something from nothing.

Two impressive goals, but there was more to Domínguez’s performance than the goals. In his long-sleeved shirt, Cecilio glided past defenders with the ball at his feet, and his smooth, silky dribbling should have earnt América two penalties. Both shouts were wrongly turned down.

América’s victory was a fantastic way to get over last week’s disappointing defeat at home against Querétaro. Las Águilas may be lacking a bit of depth in the squad, but if they can keep Cecilio fit for the season, América should be a threat in liguilla.

Javier Torrente in trouble at León

Javier Torrente got his Liga MX coaching career off to a stunning start, gaining seven wins from his first 11 León games. Then, in the Clausura, it all fell to pieces, as León finished 14th.

Rock-bottom of the table after two games, things haven’t picked-up for Torrente and León yet, and many are now questioning how long he’ll have left in charge of La Fiera.

Who will be first to get the sack? #ligamxeng

Torrente’s high-pressing game worked wonders when he first arrived in Mexico, but wasn’t effective in the 2017 Clausura.

There are many possibilities why the pressing game stopped working. One of which is the heat and altitude of Mexico, which reduces the physical capacities of players. Fatigued players would have been less capable to carry-out a successful high-pressing game as the season wore on. But after a good summer break, León’s players should be refreshed physically.

Another possibility is the thought that low-possession football, which the highly direct León were playing last season, can only be successful for a short time period, as the team with more possession is statistically more likely to win any given match. Last season, Necaxa weren’t able to keep up their impressive Apertura results that they gained through low-possession football in the Clausura.

In this regard, Torrente appears to have made an alteration. León have had 49% possession in their first two games of the season, an increase on last season.

However, it hasn’t had the desired effect. León have lost both matches, conceding a concerning six goals in the process.

Considering last season’s struggles and the poor start to this campaign, Javier Torrente has become the leader of the sack race.

Stat of the Week

Pachuca have failed to score in 8 of their last 10 #ligamxeng games pic.twitter.com/xgfbjyIDmJ