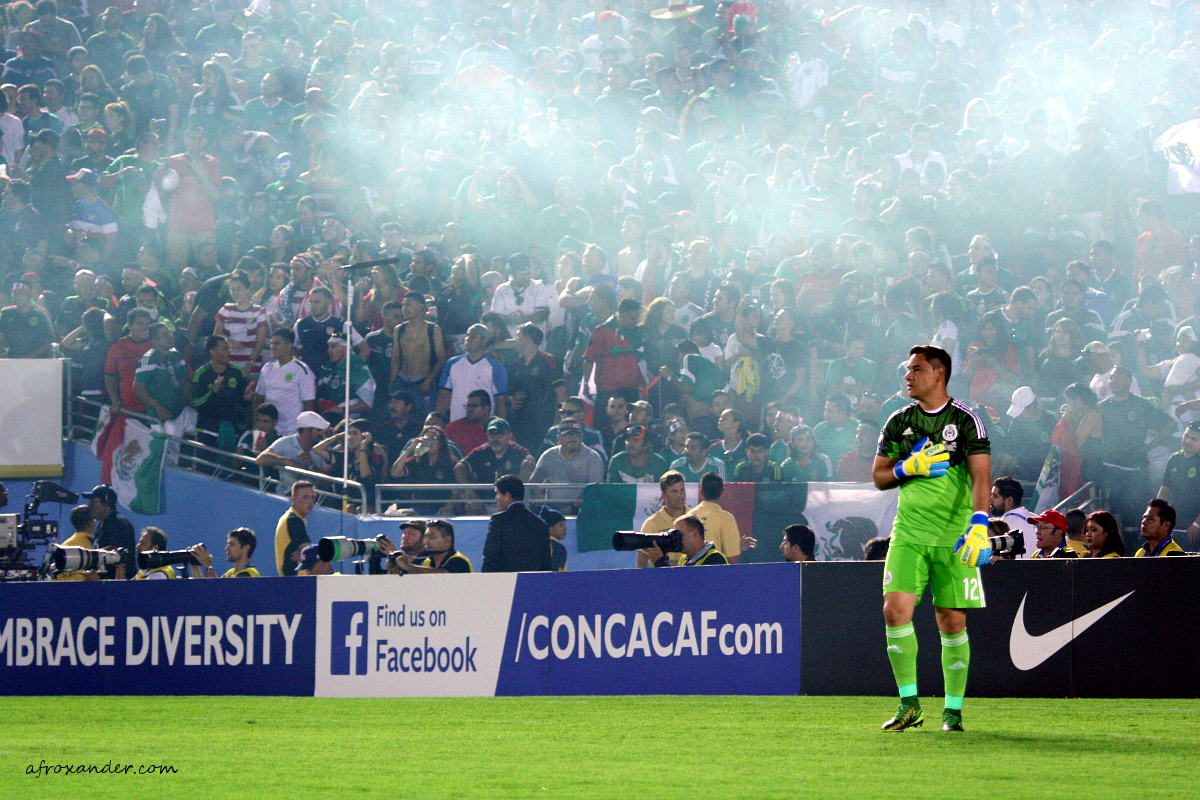 When Mexico face Jamaica later today at the Rose Bowl in Pasadena for the Gold Cup, they’ll have an extra man defending the Gold Cup trophy. Adolfo Rios, El Arquero De Cristo, will be in attendance with tournament sponsor Allstate before the match and he’ll have the Gold Cup trophy with him for photo ops and autographs with fans at the Futbol Fiesta fan zone. Rios, who in his 35 caps with the national team won two Copa USA (the precursor to the Gold Cup, as he later explains) titles and defended el tricolor between the sticks in a handful of third-place victories at the Copa America, took a few minutes to chat with us about his work with Allstate and the growth of the Gold Cup in recent years.

What brings you out to Los Angeles? Are you on tour with the Gold Cup?

I’m on tour with the Gold Cup trophy thanks to Allstate. We’re taking the cup to all the games featuring Mexico and hoping the trophy returns home with Mexico at the end of the tournament. So that’s our intention: to give fans the opportunity to pose and take photos with the Gold Cup trophy and to join us at the Futbol Fiesta, which we’ll have tomorrow before the game. Right now, I’m actually part of a goalkeeper camp in the local community here in Los Angeles. It’s always nice to spend time with people here in the Latino community.

So now you’re the goalkeeper guarding the Gold Cup trophy!

What do you have planned for tomorrow at Futbol Fiesta?

I’ll be at Futbol Fiesta with Allstate at their booth where fans can take photos with the Gold Cup trophy. I’ll be there too to take pictures with the fans, to sign autographs and, actually, that area will be open to the public whether they have a ticket to the game or not. We may also have a raffle for tickets to the Allstate suite where the winners can watch the game alongside me in the suite.

Besides this, what else have you been working on?

Well, I’ve worked on numerous personal events in Mexico, in Queretaro, and it gives me the chance to attend these types of events. I’ve worked with Allstate for a little over six years and Allstate has hosted these tours with the Gold Cup trophy for about two years now.

When you were Mexico’s goalkeeper, you played in a few tournaments including one called Copa USA. Was that similar to the Gold Cup?

That’s correct, I played in the Copa USA tournaments. The Copa USA eventually became the Gold Cup and we lifted that trophy back then too.

And as someone who has played in that tournament, how has it changed over the years?

It’s changed immensely. It’s much more important now than what it was before because, logically, every team plays with the intention of winning it especially now that there is a clear and specific importance of what it means to win the tournament. The media also does a better job of promoting the tournament and giving it more weight and, of course, as well as the implications of winning it.

It also helps that CONCACAF has now attached a half-ticket to the Confederations Cup with each tournament.

Do you think these changes not only to the Gold Cup but also to the Concacaf Champions League have helped improve the level of football in CONCACAF?

Yes, the commitments have changed. Of course, with so many commitments for all these national teams, it doesn’t give you the space and leeway to accommodate everything in every game. Mexico currently has great players but those players are in teams in Europe and, logically, their clubs put every effort in lowering the amount of opportunities they have with their national team. That’s why the players need to be able to be part of the decision process in these competitions.

It’s certainly an interesting topic considering how many Mexican players today are based in Europe.

Precisely. That’s why some clubs aren’t quick to loan the players out to the national team unless they are obligated to. By that, I’m referring to the obligation as outlined in international FIFA matches.