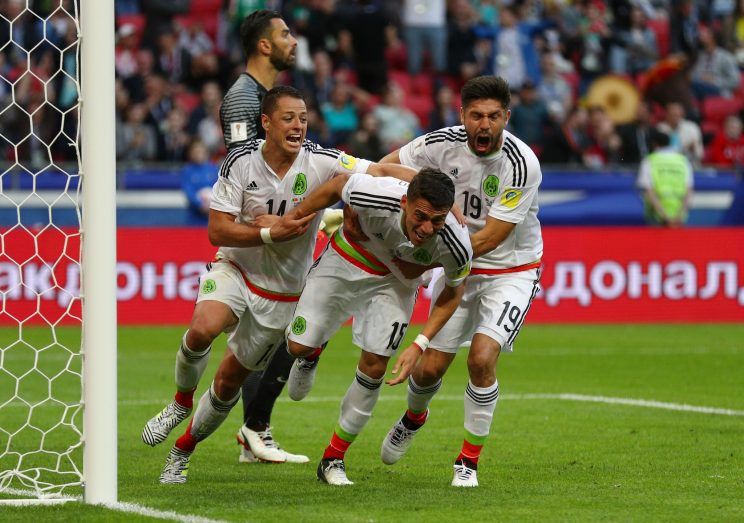 Mexico able to create the match they wanted

Juan Carlos Osorio setup Mexico to dominate possession, and that’s exactly what they did, with 59% of the ball.

Mexico could be accused of taking too few risks when in possession, but they kept the ball well, and regularly won it back quickly. This was enabled by an often impressive high-pressing game. Javier Hernández, Raúl Jiménez and Carlos Vela worked hard up top, as did Jonathan Dos Santos and Miguel Layún.

Achieving the aim of dominating possession against the European champions is certainly worthy of note. Chances were created from the possession as well. On top of the two goals, Chicharito had two very good opportunities that he wasn’t able to finish.

However, it could be argued that this was the sort of match that Portugal, who won Euro 2016 by playing a pragmatic style of football, wanted, Perhaps they wanted Mexico to have most of the ball so that they’d be able to soak up pressure and hit on the counter.

Defence poor at dealing with through balls

When Portugal were able to break through Mexico’s high-press, major problems were created. Without a real anchor man in the midfield, Portugal often had time in front of the Mexico defence, which were regularly holding a high-line.

As a defender, if an opponent has time to pick out a pass, you should start to move backwards, giving a head-start on a foot race if a through ball is played. Mexico’s defenders didn’t do this well enough, and often adopted poor body shapes, like Carlos Salcedo before Ricardo Quaresma’s goal.

Awful goal. Salcedo's positioning to let Ronaldo in was really poor. Then, Moreno should have tracked Quaresma, but was drawn to the ball.

Mexico’s defence have often looked unconvincing under Juan Carlos Osorio, and this performance has done nothing to improve confidence in the El Tri back-line. Perhaps Osorio needs to patch up this deficiency of Mexico by playing more pragmatic football, and giving Mexico’s back-line more support defensively. Using an anchor man to sit deep in front of the defence could be of major benefit to the El Tri defence. Alternatively, Osorio could adopt a deeper defensive line, leaving less potential for through balls to be played in-behind Mexico defenders.

More problems with players out of position

Carlos Salcedo had a very poor day, and his quality can be questioned. Salcedo is often noted for being a good tackler, which some say is a negative aspect to notice about a defender. The truly best defenders, like Paulo Maldini or Franco Baresi, didn’t often have to make tackles, their positioning was so good.

However, Salcedo can’t be judged on his recent games. For both club and country “El Titan” has been played out of position at right-back. It is to be expecedt that a player’s performance would decline if they are played away from their favoured, ‘natural’, role. Right now, playing Salcedo at right-back doesn’t appear to helping the player or Mexico, but Osorio’s options are limited as he hasn’t taken a proper right-back to Russia.

Javier Hernández also spent much of the game out of position, coming in from the left-side. However, the hard work of Layún meant that often Chicharito was able to move inside without disrupting Mexico’s balance and width.

Juan Carlos Osorio often uses players away from their favoured positions, and there have been plenty of occasions when such decisions have hurt El Tri.

Guillermo Ochoa made four saves during the match, including some fine stops. The most noteworthy was the diving save to prevent André Silva’s header from finding the back of the net. Silva headed back across goal so Memo did extremely well to adjust his body, and generate enough power in his dive make the stop.

Jonathan Dos Santos was man of the match to many. Jona was busy throughout the encounter, pressing Portugal well, helping Mexico retain possession, and causing problems with forward runs from deep. Midfield runners are usually difficult for defenders to deal with, as it can offer a dilemma over who picks up the runner. Dos Santos has been making these runs regularly in the last couple of Mexico games, an interesting Osorio tactic.

Carlos Vela has been showing his class for Mexico recently, his equaliser against the US being a great example. Once again he got Mexico back into the match after going a goal down. Many would have hit a right-footed volley from his position inside the box, but he intelligently crossed for Chicharito, whose move towards the front post got him ahead of Pepe, creating the opportunity to head in from close range. Vela often over-hit passes against Portugal, but always looked like the player that would create something. Giovanni Dos Santos wasn’t nearly as effective from the bench.

Set-pieces- One of Osorio’s best achievements with El Tri

Whilst I bemoan Osorio’s need to play a certain number of ‘tall’ players, this concept has likely been a major factor behind Mexico’s success at set-pieces recently. Mexico once again profited from a set-piece against Portugal, with Héctor Moreno’s late header earning a point.

In the last minutes of the game, @HectorMorenoh scores the equalizer to secure the 2-2 draw against Portugal!pic.twitter.com/LoqL0UvcuL

An article written in February explained how most clubs and coaches currently neglect the potential significance of set-pieces, not devoting enough time to analysing opposition strengths and weaknesses, and practising designed moves on the training ground. Mexico’s recent success at scoring from set-pieces suggests that Osorio has been dedicating plenty of time to working on corners and free-kicks.

Of course it’s impossible to say if time used working on set-pieces could have been better spent on, for example, defensive shape. But in recent games Mexico have gained results from unconvincing performances, thanks to a number of set-piece goals.