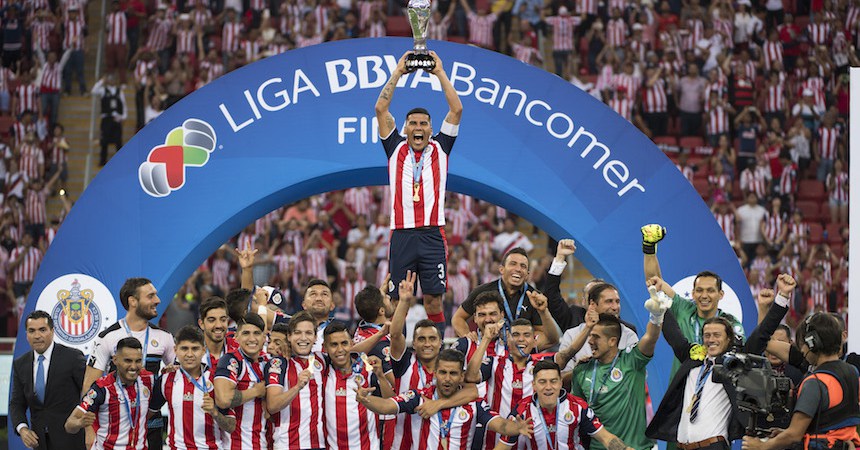 Chivas won their first Liga MX title since 2006 with a four-three aggregate victory over Tigres. Tom Harrison breaks down the two legs, and how Chivas surprised most to become champions.

Much like Pumas in recent, so called “clásico felino’s”, battling with Tigres over possession wasn’t effective for Chivas. It opened up the game, allowing Tigres’ star attackers the time and space to thrive in.

Learning from the mistakes of the past, Matías Almeyda may have been tempted to copy the style of the majority of teams when they play Tigres. Let Tigres have the ball, but in front of you. Sit deep and compact, reduce time and space in the final third, and prevent penetrative passes.

This strategy has worked very well for many sides in the past, aided by Tigres’ risk-averse style. Ball retention is prioritised over looking for key passes, and few players are pushed forward, to maintain defensive cover. Although, Jesús Dueñas has be given more license to push forward recently.

Matías Almeyda is a man of footballing principle. The Argentine believes in trying to gain dominance over matches, and instead of copying others, he stuck to this principle against Tigres.

Again, Almeyda tried to battle over possession, but this time he was much wiser in his approach.

Two players were crucial to Chivas being able to disrupt Tigres’ style, and hold a lot of the ball; Orbelín Pineda and Alan Pulido. Playing as an attacking midfield role, with two holding midfielders behind, rather than the usual one, Orbelín’s job was to man mark Tigres’ focal point, Guido Pizarro.

Pizarro has had more touches and has both completed and received more passes than any other player across the 2017 clausura. Pineda, despite losing a few one v one battles, prevented Pizarro from getting on the ball on multiple occasions, as he carried out an impressive man marking job.

Ordinarily, Orbelín’s press onto Guido would have left gaps in behind, either in the midfield or behind the defence. But Almeyda managed to prevent this. Mainly due to Pulido’s role.

Pulido’s work rate has been put to excellent use across the campaign, with the former Olympiakos striker ranking tenth on distance covered per 90 minutes this season.

On Thursday, Pulido was used to cover any gaps created as a result of Orbelín being dragged around by Guido Pizarro. Pulido didn’t press Tigres’ centre-backs, giving Juninho and Hugo Ayala time on the ball, but very few options. Pulido’s deep position (for a striker) when out of possession also allowed Chivas to remain compact without holding a high line.

The defensive role of a striker has greatly developed in the modern game, and this was fantastic proof. Through high physical capabilities, a strong work ethic and the ability to understand and carry out a task given by his coach, Alan Pulido allowed Chivas to battle over possession, without giving up space in the midfield or behind the defence.

When Chivas got the ball, they looked to exploit the weakness of Tigres’ centre-backs, lack of pace. Chivas looked to penetrate quickly, and did so successfully. Their reward was a shock two-goal lead at half-time.

With a strong lead at half-time, Matías Almeyda decided that now was the time to follow the how to play against Tigres script.

They sat back, and stopped trying to battle over possession. Guido Pizarro wasn’t constantly harassed by Orbelín Pineda, and he had more opportunities to get on the ball.

Perhaps this move was a good one from Almeyda, as Chivas may not have had the physical capacity to maintain their first-half performance. However, it appeared a poor tactic at full-time.

Chivas invited on mounting pressure from Tigres as the half continued, and eventually cracked. A magical run from Damián Álvarez, perhaps making the most of a mental lapse after Chivas had spent so much time defending, set up André-Pierre Gignac’s first.

Just minutes later Gignac had his second, and an equaliser. Again, it may have stemmed from a defensive lapse, as a long through ball found its way through to the Frenchman.

Chivas’ outstanding first-half had been wiped out, the momentum had shifted, but two-two away from home was still a good result.

2nd leg, 1st half: Beat Tigres at their new game

Ricardo “Tuca” Ferretti surprised with his tactic during the second leg. Instead of the risk-averse, possession-based, “Tuca-Taka”, we witnessed a direct Tigres.

Rather than ball retention, Tuca prioritised penetration, with his players looking to get the ball forward as quickly as possible. The main target of these passes was Ismael Sosa, moved centrally for this match at the expense of the link-up man, Lucas Zelarayán. Sosa is well-known for his intelligent and regular runs off the ball, in-behind defences.

With Sosa playing centrally, and Damm, Tigres are trying so hard to get in-behind Chivas. Right now, they're losing the ball a lot.

Tigres completed just 74% of their passes against Chivas on Sunday, a very low percentage for them. Across the clausura, Tigres’ pass complete percentage is above 81%.

With Tigres’ players not used to such a style, and Chivas using Carlos Salcido as almost a third centre-back, an excellent decision, the direct tactic didn’t work. It created a frantic match, with possession rapidly bouncing from team to team, player to player.

Chivas were able to take advantage of the style of the match though, creating more opportunities than their opponents with some rapid, intelligent and impressive moves.

The triangle of Rodolfo Pizarro, Orbelín Pineda and Alan Pulido were the standout attacking players on Sunday. These three used their ball retention skills, vision, quick-thinking and ability to play in tight areas as they broke down the Tigres back-line. This was Chivas’ main source of creation throughout the encounter.

Chivas were also able to penetrate in-behind the Tigres defence to greater success than their opponents could do to the Chivas back-line. The only goal of the first half came as Oswaldo Alanís found Pulido with a ball over the top. Pulido did the rest, producing a classy volley which found the far corner of Nahuel Guzmán’s goal, and enhanced the case for Alan being described as the player of the final.

ICYMI: Alan Pulido opened the scoring in #LaVuelta for Chivas with this one touch finish. #LigaMXEng pic.twitter.com/MYtjhHVsCI

2nd leg, 2nd half: Extend the lead, and disrupt once more

Despite the strategy not working, Tuca stuck to his plan, and much of the second half continued in the same vain as the first period. Some impressive play caught the eye, but much of the half drifted by as more risky passes didn’t find their intended target.

With Chivas looking slightly better in a rather scrappy half, it was fitting that a scrappy goal doubled Chivas’ advantage.

Carlos Fierro bundled his way through to the byline, and after his cross wasn’t fully cleared, José Juan “Gallito” Vázquez’s strike just about found the back of the net via a deflection.

Chivas now had to show they’d learnt from the first-leg, and hold onto the two goal lead.

What the Guadalajara side did so well during the last 20 minutes was frustrate their opponents. Chivas disrupted the play at any opportunity. They stopped the flow of the game. They made it ugly. And they annoyed Tigres, who picked up four yellow cards in the last 20 minutes.

Ismael Sosa did threaten to start an extraordinary comeback when he found the far corner in the 88th minute, but Chivas managed to see out the remainder. Just about.

A foul on Sosa should have seen a penalty awarded, but fortune was on Chivas, and Matías Almeyda’s side on this occasion.

The PK that never was. A huge missed call in the #LigaMXEng final and @Nicocantor1 gives his take for the latest #CornerofControversy pic.twitter.com/uLv07FYev5

Almeyda also has his keeper, Rodolfo Cota to thank. Cota made two impressive one-on-one stops on the rare occasions that Tigres’ direct style was able to penetrate the Chivas back-line.

However, Almeyda displayed his excellent coaching skills across the final, and got the better of Tuca Ferretti for the majority.

Relegation battle to #ligamxeng champions. Plus a couple of Copa MX's. And Almeyda's done it with style. He's had money, but what a job. pic.twitter.com/TUv5nsFGS8

Matías Almeyda has taken Chivas from the brink of relegation, to two Copa MX titles, and now, most importantly, a Liga MX crown. Plus he’s done it whilst building a team that play with some style, his style. Sure, Almeyda’s been well-backed by the Chivas board, many expensive additions have been made but money doesn’t guarantee success. The money had been well-spent for the majority, and Almeyda’s managed to build a side that understand and can effectively carry out his tactics.