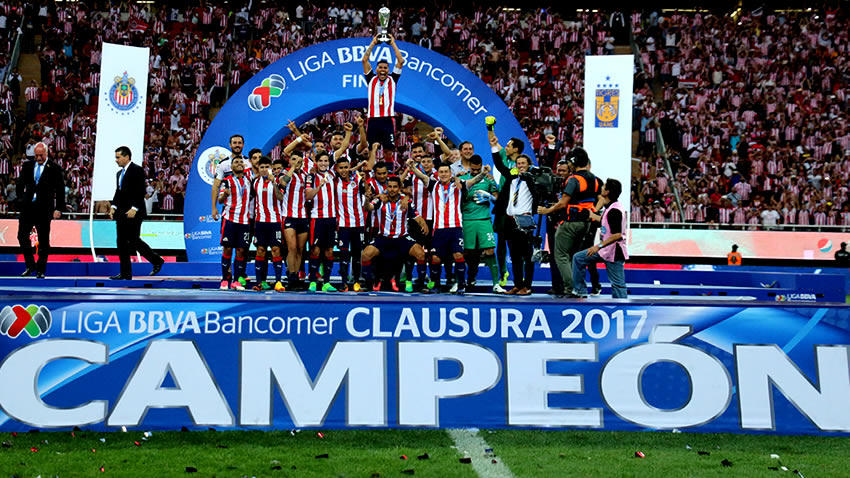 ZAPOPAN, Jalisco, Mexico. After Thursday’s opening leg which produced a 2-2 draw, Chivas looked to hold onto their lead in Sunday’s return leg with the goal of claiming their first Liga MX title since 2006. With goals from Alan Pulido (16′) and Jose Juan Vazquez (69′), Chivas defeated the visiting Tigres UANL 2-1 (and 4-3 on aggregate) to claim the Clausura 2017 Liga MX title.

With a boisterous Estadio Chivas on hand to start the match, Los Felines de UANL were forced by the hosts to take possession of the ball and create chances. With a tight Chivas defense, Tigres found it hard to create chances on Chivas’ tight man-marking early.

And in the game’s sixteenth minute, off their first real chance of the match on the counterattack, Alan Pulido fired a first-time shot past Nahuel Guzman off a long, diagonal pass by Oswaldo Alanis to open the scoring for the hosts.

Tigres continued to pile pressure on Rodolfo Cota’s goal, but shots from Andre-Pierre Gignac, Ismael Sosa, Javier Aquino, and a moment of indecision and innocence by Jurgen Damm, all missed the mark without seriously troubling the Chivas goalkeeper.

The hosts also had a few other chances to extend their advantage in the first half. But both chances were at the foot at Alan Pulido who neither could get to the ball in time or skied his shot into the Estadio Chivas stands.

At the start of the second half, Chivas started to establish a little bit of a passing rhythm in possession, and tried to create several chances off of it. At the risk of putting Tigres’ into their preferred approach to playing games, Rodolfo Pizarro created the first of those significant chances in the sixty-first minute. ‘Rodo’ worked his way out of a Tigres trap and found Carlos Fierro down near post wing, but ‘Wero’ could not direct a cross to a Chivas player for a significant chance. And then, two minutes later, Carlos Salcido fired a free kick from a scoring position outside the penalty area, only to have it drift well wide of the goal.

But in the sixty-ninth minute, after Andre-Pierre Gignac and Juninho both missed shots off counters and corners, ‘Gallito’ Vazquez doubled the hosts’ lead with a low shot from 20 yards out that deflected off a Tigres defender and beat Nahuel Guzman.

Ricardo Ferretti’s side knew they needed two goals to get back into the match, but they seemed to lack an approach, or much fluidity and synchronicity in the approaches they took, especially against what looked to be Chivas’ tight man-marking.

And in the eighty-eighth minute, Ismael Sosa pegged Tigres back within one goal with a 2-1 deficit in the match on a shot outside the Chivas penalty area that caught Rodolfo Cota by surprise. But it ultimately would not be enough for Los Felines to force added extra time and keep alive their hopes at becoming Bicampeon.

With the title, Chivas do not just collect their first Liga MX title since 2006 and their twelfth league title in total. Chivas also become the first team to win the Liga MX and Copa MX double in the same tournament since Cruz Azul achieved the feat at the end of the 1996-97 season. The Clausura 2017 tournament also marks the second time Chivas won the league and cup double, and the first time since the 1969-70 season that El Rebano won it. Necaxa (along with Cruz Azul) are the  only other team to have won the Liga MX domestic double, doing so in the 1994-95 season.

How does Gignac stack up?
Chivas Campeón: In-depth analysis of the Clausura 17 final
To Top