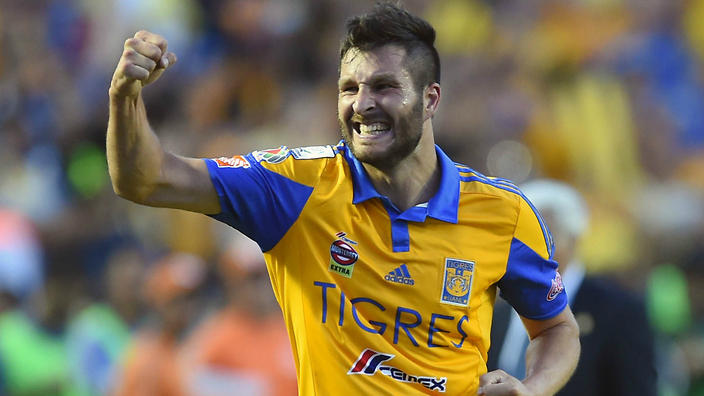 When Tigres and Guadalajara take the field in the first leg of the Liga MX C17 final, the fans at the Estadio Universitario will be ready to erupt in song, as they have since the last time Chivas visited el volcán.  Tigres has been unstoppable since the first time the two finalists met.  A 3-0 win for the home side was the first step in a streak that has seen Tigres win 8 of 9 games, outscoring their foes 22-2 in the process. Needless to say, Tigres’ recent dominance makes them prohibitive favorites to win their 2nd consecutive Liga MX title, and 3rd in just four seasons.

10 of those 22 goals were scored by Andre-Pierre Gignac.  In just 2 years, the French International has been the cornerstone of Tigres’ lethal attack and has consolidated himself as the best player in Liga MX.  He has become an iconic figure not only in Monterrey, but in every corner of Futmexnation.  And I dare anyone not to get chills when Tigres faithful serenade him after he scores.

You can understand why some folks are starting to throw Gignac’s name around when it comes to Liga MX all-time greats.

I don’t want to upset the Gignacos that are reading this, but he is not quite there… yet.  Look, I am not here to bury or praise Gignac.  While his status is indeed and deservedly exalted, he hasn’t accumulated enough hit points to reach immortality.  Who has?  With Liga MX historically being an importers league, it is not out the question to rate both locals and imports.  So where does Gignac rate among the finest imports to grace Liga MX? Has he done enough to crack the following top 5 of the modern (color TV) era? 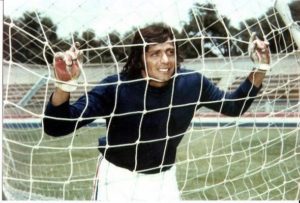 A lot of goalies are nicknamed el gato, as was Marin.  But he was also handed another monniker.   And when that one is Superman, it deserves special consideration. When it is a goalkeeper, it is a no brainer.  The Argentine netminder was Cruz Azul’s last line of defense for the entirety of the 70’s, which any cementero fan will tell you belonged to La Maquina.  He retired in 1980, but not after amassing an impressive hardware collection.

In the last days of the long season era, one team towered over the rest of Liga MX:  Necaxa.  And in a team that had talent hasta las cachas, Alex Aguinaga – the God of Lightning –  was the best of the bunch.  The Ecuadorian helped Necaxa win the last two long season titles, and squeezed in a short season title before he was done.  He scored a pile of massive goals for the electricians.   He beat Real Madrid in penalties at the CWC.  But none prettier, though, than this one, which should be mentioned among the greatest goals in Liga MX history. 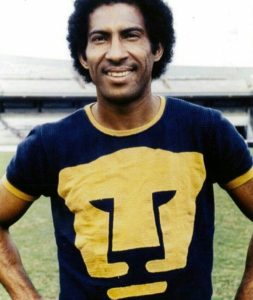 If you do not recognize the name, perhaps you might recognize the nickname – Cabinho.  The Brazilian striker played 10 years in Mexico and finished his career with 312 goals, which is the most in LigaMX history.  He led the league in scoring 8 times for 3 different clubs.  He is the reason un servidor became a Pumas fan. He scored from distance, crashing the 6,with the head, the right, the left, whatever it took.   He scored a lot.  Despite his peerless ability, Cabinho was only able to bag 1 league title, and it is the main reason he is not higher on this list. 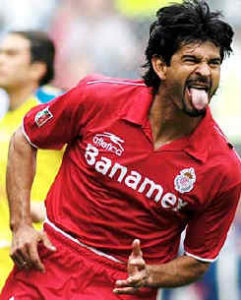 The only player to come close to even threatening Cabinho’s record was the Paraguayan Toluca striker.  He rates higher on this list because of his contributions to Toluca’s short season dynasty at the turn of the century.  Except for the most goals in league history, he holds just about every other scoring record.  He once scored 29 goals in a short season.  29!  That is not a typo. Teams have a good season when they can put up 29 goals.  And when it mattered most, in the liguilla, el Diablo Mayor was even better.  His tallied 43 goals in the post season, including 9 in finals. 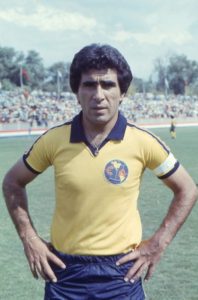 It was a tough call between Cardozo and Reinoso in the top spot, but Reinoso gets the nod because he was primarily responsible for the surge in Liga MX popularity as television became the primary vessel to bring LigaMX to the masses.  When you wonder why America is the most polarizing team in Liga MX, he is the big reason why.  The Chilean known, naturally, as El Maestro, was instrumental in modernizing the game in Mexico.  He was the protype complete player: size, strength, sublime physical conditioning, technical skill, vision… the list goes on and on.  A fantastic goal scorer and even better set up man.    His most famous goals are audacious, borderline arrogant.  Perfect for an Americanista.  El Maestro led America to a couple of league titles, and scored the game winner vs Boca Juniors in the 1978 Intercontinental Cup.  In 2008, he was voted America’s greatest player by their fans.  And you know how high their standards are.

BTW, The only other foreign players in the Mexican Soccer Hall of Fame (that played or coached in Liga MX) are Bora and Renato Cesarini.

Gignac has led his team to a couple of titles, and if he spends the rest of his career in Liga MX, there is a chance he might become a LigaMX immortal.  But it is a little premature to consider Gignac an all-time great just yet.  For now, he is in the very, very good category with the Tucas and Chupetes and Hachitas.  He has a chance to make his case a little stronger this weekend.  Who doubts him?  Not the Tigres fans,  They are resting their instrument in case they need to serenade him again, and again, and….