If you haven’t had a chance to watch the video preview, you can watch it here. If you’ve already done that, let’s get this #AskCesar underway!

@cesarhfutbol Who is the best Mexican right back in Liga MX, where does chapito rank? Should chapito be on el tri?

If everyone was healthy and fully fit, I would still say that Paul Aguilar is the best Mexican right-back in Liga MX. As for Chapo Sanchez, I would say that he is currently #3 on the list and an ideal name to test out during the Gold Cup.

The big question now is if Osorio will try-out a backline of four at some point during that tournament.

@cesarhfutbol Should I craft alexstrasza or Harrison jones? They both seem like good cards. #askcesar

I had to google this and now I’m very confused.

@cesarhfutbol With only a few weeks until the Croatia friendly, who's in your starting lineup? And should Osorio start his best squad vs a good team?

This one is really tough to decide on because Serie A, MLS, the Liga MX playoffs, the Taca de Portugal final and the DFB-Pokal final will still be going on when that game rolls around. That likely means no Carlos Salcedo, Marco Fabian, Raul Jimenez and whichever national team players that are taking part in the Liga MX final.

I like the idea of a strong lineup, but also one with some subtle changes. This is what I would do. 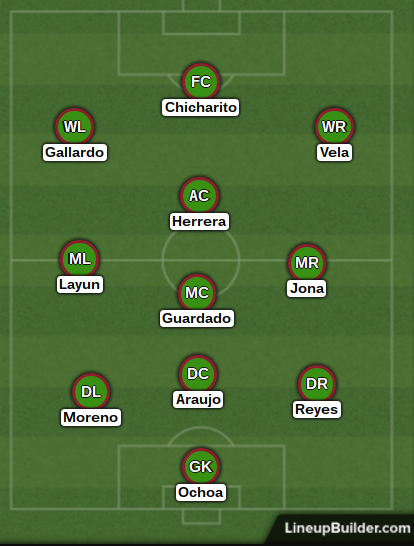 It has to be “Dedos” for Raul Lopez. It’s so strange and odd but I love it.

Both are incredible athletes, but if I had to select one, it’s Hugo Sanchez. What he accomplished at the club level, especially with Real Madrid, is phenomenal.

@cesarhfutbol With Copa del Mundo next summer already, are we asking too much of footballers?

Do you mean tournament-wise? Probably. For some players, there isn’t going to be much of a break before Russia 2018. For example, some Mexican national team players will be busy with the Gold Cup or Confederations Cup before jumping straight back into their upcoming seasons.

With rarely any time to waste in Liga MX, it’s going to be nonstop futbol before the next World Cup. Let’s also not forget the Club World Cup for a team like Pachuca this December.

I actually had no idea until I clicked on that link. I believe we just gave that auto insurance company some free promotion.

@cesarhfutbol Does it sadden you that MX tiny share of the WC bid was not more controversial in MX? No big protests and the news died in a few days.

I believe it was just as controversial over in Mexico, and you could see it from the media response. The reason why I believe the anger quickly died down was because people realized that the current plan is a proposal and not actually set in stone.

Whether that potentially means more games for Mexico is up in the air, though.

@cesarhfutbol What's the best matchday atmosphere you've ever seen in person? Did the stadium play a big role? The fans, weather, neighborhood, food?

It’s somewhat recent, but the 2015 CONCACAF Cup match between the United States and Mexico was the most fun I have ever had at a soccer game.

Any Mexico vs USA match is electric, but with 93,000+ fans packing the Rose Bowl, it was thrilling to be in attendance for the clash between the two rivals. I’ll never forget it. I’ll never forget that golazo from Paul Aguilar either.

@cesarhfutbol Who's going to win the NBA championship?

It’s gotta be Golden State or Cleveland, right? I’ve been watching the playoff games on and off, but I’m going with LeBron leading Cleveland to another title.

Do you think the change in altitude impacts Xolos' away performances? They're usually a fair bit poorer away than at home. https://t.co/rT9hOOmzAb

There’s definitely an argument for that and the distance traveled for Xolos. Other teams don’t rack up as many miles as Tijuana does so it makes sense why the squad sometimes struggles in away matches.

That said, Xolos have been able to overcome these problems and have emerged as one of the best away teams during the regular season. Excellent stuff from them over the past several months.

@cesarhfutbol How bad was this ref in the GDL/ATL game?

I get why Chivas fans were bothered with that penalty call. I think it was the right call, but it was definitely a soft, soft, soft penalty and an unfortunate way to lose the game.

All depends on who is playing in the Liga MX final! As mentioned earlier, a lot of stuff going on with different matches at that point.

There are some names, though, that MUST be in the Confederations Cup roster. At this point these 18 seem to have a spot guaranteed: Ochoa, Talavera, Araujo, D. Reyes, Salcedo, Moreno, Layun, HH, Jona, Gio, Fabian, Guardado, Tecatito, Lozano, Vela, Damm, Chicharito and Jimenez.