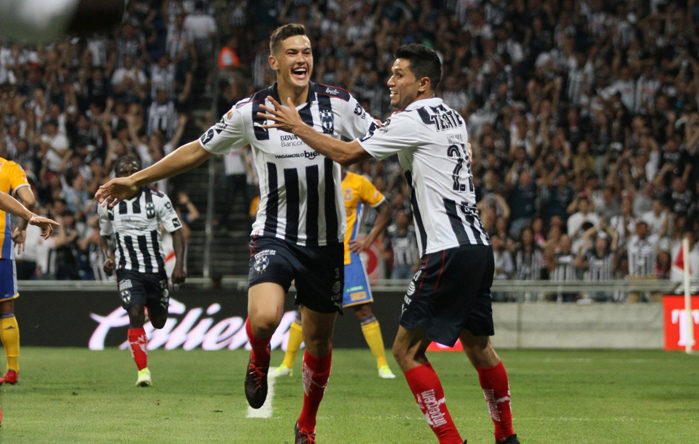 There was drama at both ends of the table over the weekend. Tom Harrison wraps up all the action, including analysis of Clásico Regio and Atlas.

Missed any of the #LigaMXEng action this weekend? Check all the scores from #J15CL2017 pic.twitter.com/XIh8jdVSAw

The final Clásico of the regular season took place on Saturday night, with Rayados facing Tigres.

As it has been in recent years, Clásico Regio was a superb advert for Liga MX football. It may not have had the madness of some Liga MX games, but the sight of a packed-out, state-of-the-art Estadio BBVA Bancomer, plus passionate fans, quality players and sophisticated tactics showed Mexico’s top flight in a fantastic light.

The game meant more to Tigres in terms of league position, as they started outside of liguilla, but it was Los Rayados that were able to come away with victory.

César Montes volleyed home Dorlan Pabón’s corner in the 57th minute, for what turned out to be the winner.

Tigres dominated possession, as they usually do, but found chance creation extremely difficult. André-Pierre Gignac and co managed just six shots on goal, with only one of those shots hitting the target.

Victory meant Monterrey went home with bragging rights, and perhaps more importantly, they made a massive dent on Tigres’ play-off ambitions. Tuca Ferretti’s side may require wins in both their remaining league games to make liguilla, not easy with the second leg of the CONCACAF Champions League coming up.

Veracruz move out of the relegation zone

Veracruz hadn’t won an away match since November 2015, and hadn’t scored in their previous six away league games. Few expected their trip to Pumas to be fruitful, but against the odds Los Tiburones Rojos came away with a shock two-nil victory.

There was a fair amount of luck involved in Veracruz’s win. Firstly, Pumas’ Dario Verón was shown a straight red card for a stamped challenge. Then, just before half-time, Veracruz scored probably the most fortunate goal of the season. A José Carlos van Rankin clearance hit a teammate on the back of the head, falling perfectly to Leandro Velázquez, who made it one-nil.

Juan Antonio Luna’s side held off Pumas, who managed zero shots on target, for the second-half, and wrapped up the victory on the counter. Cristian Pellerano finished off a counter in the 85th minute, set up by Adrian Luna.

Fortune played a major part in the result, but tons of credit must go to Luna for his recent work. Since taking over from Carlos Reinoso, he’s revolutionised the style of Veracruz. Gone are the endless long balls to Eduardo Herrera, replaced by a shorter passing game with the use of a false-nine, Ángel Reyna, up front.

Veracruz averaged under 70% passing accuracy under Reinoso, against Pumas they completed 81% of their passes, a massive improvement.

Whilst the win was huge for Veracruz in their quest to beat the drop, it was disastrous for Pumas and Paco Palencia. A run of three defeats in four has left Pumas in 12th, probably needing two wins in their final two matches.

Liga MX’s format means you can be successful without consistently playing well. Just look at León.

León had been absolutely dire during the Clausura until five games ago. Before the trip to Tigres, Javier Torrente’s side were rock bottom with just six points from ten games. Victory at El Volcán has proven a massive turning point in their season, and after picking up their fourth win in five games, León are just a point off eighth place.

The latest three points came at home against Puebla. La Franja will feel unfortunate to have lost having had more possession and shots, but the majority of Puebla’s efforts were blocked (9 out of 13), and León created the key moment.

Mauro Boselli was found by Andrés “Rifle” Andrade after making an intelligent run, and his first time shot went in via the glove of Israel Villasenor.

ICYMI: Mauro Boselli gave La Fiera a half time lead against Puebla with this. ? #LigaMXEng pic.twitter.com/Uc5zxmyFjV

León still have plenty of work to do if they are to remarkably qualify for liguilla, but the form is good and confidence must be high. Next week’s trip to Chivas should prove tricky though.

Turco gets one over Tuca

Clásico Regio was a fascinating tactical battle between two of the most highly rated coaches in Mexican football right now.

One of the most interesting tactical aspects of the match was how Tuca Ferretti dealt with Turco Mohamed’s formation. Rayados played with a 5-3-2 formation, meaning they would have had an overload against Tigres’ front two of André-Pierre Gignac and Eduardo Vargas, as well as a 3v2 in central midfield.

Tuco responded to this by changing his system. When out of possession, Tigres lined up in a 4-3-3 formation. Gignac and Ismael Sosa played as wide strikers, marking Monterrey’s wide centre-backs, with Vargas marking the one in the middle. Javier Aquino dropped inside to form a central midfield three. As a result, Rayados didn’t have a spare man to pass to at goal kicks, and had to resort to playing long balls. Tigres won many of these long balls, aiding the amount of possession that they enjoyed on Saturday, which ended up at 65%.

Changing formation when out of possession may have hurt Tigres’ performance when they had the ball though. Even for Tigres’ standards, they were terrible at creating chances from their possession. Tuca’s side attempted six shots, half what Rayados managed, with just one of these hitting the target. Tuca may have won the battle, and the possession, but Turco won the war.

In their two previous matches, Tigres have taken advantage of Chivas and Pumas coming at them and opening up the game. Rayados didn’t do this. They kept it tight at the back, frustrated Tigres, and carried a threat on the counter with Dorlan Pabón, Rogelio Funes Mori and Yimmi Chará. Dropping Edwin Cardona and Carlos Sánchez may not have been popular decisions, but pragmatism proved the correct choice.

It’s a tried and tested method of beating Tigres, but Turco Mohamed’s men perhaps carried it out better than anyone has previously. Keeping a side down to six shots despite them having 65% of the ball is a remarkable achievement.

Victory over Pachuca was Atlas’ sixth this season, and took their unbeaten run to five games. “Profe” Cruz’s side haven’t received too much media attention this Clausura, but they sit seventh, are the league’s third top scorers and are becoming recognised as dark horses.

Cruz has adopted what might be seen as “old-fashioned” strategies since taking over Atlas, but they’re proving rather effective.

The ex-Atlante coach has mainly played two systems at Atlas, 4-4-2 and 5-3-2. Both are attack-minded and aim to exploit wide spaces before serving the front two.

Atlas’ wide players have really caught the eye during the Clausura, particularly the full/wing-backs. Luis Reyes, a surprise Mexican international, combines technical ability with powerful physicality on the left-side, in a similar way to Raúl “Dedos” López. For his first proper season in Liga MX, Reyes has performed remarkably well.

On the right, José Maduena’s displays have had some calling for him to join Reyes in gaining a Mexico cap. Maduena is fantastic going forward, using his agility and close control to cause nightmares for opponents.

There’s also a couple of young dangerous wingers in the Atlas team; Daniel Álvarez and Brayan Garnica. Both have the pace and technique to cause problems and create opportunities. Matías “Chavo” Alustiza’s winning goal against Pachuca came after excellent work by Garnica.

ICYMI: Matías Alustiza with the 35th minute chilena to give Atlas the 1-0 lead over Pachuca at HT.#LigaMXEng pic.twitter.com/l85NRMEc49

Interestingly, Cruz continued to use one of these wingers even when he was playing a 5-3-2 formation.

With the dual threat of Atlas’ attacking full-backs and young wingers, plus capable goal scorers Alustiza and Martín Barragán up front, Profe Cruz’s Rojinegros are ones to watch for liguilla.