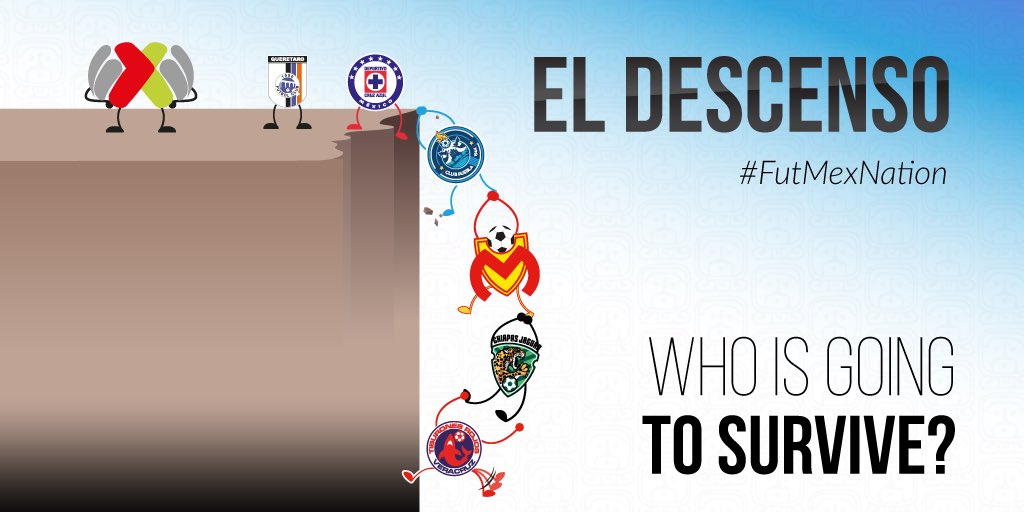 With three games to go, the relegation battle couldn’t be much tighter. Veracruz trail Chiapas and Morelia by just a single point at the bottom of the tabla de descenso. Puebla have all but saved themselves after beating Cruz Azul in the last minute during the previous jornada. Here’s Tom Harrison with his analysis of what should be a thrilling fight.

Veracruz are currently favourites for the drop, as they sit last, and just missed out on a massive opportunity for three points at home against Necaxa.

This Edson Puch panenka has given Necaxa the 1-0 lead at the "Pirata" in minute 64. ? #LigaMXEng pic.twitter.com/AGKPbVJdnf

Home form has kept Los Tiburones Rojos in with a chance of staying up thus far. 25 of their 27 points earned across the 2016/17 season have been won at Estadio Luis de la Fuente.

Away, Veracruz are on an eleven game losing streak, and remarkably haven’t scored in their last six road matches.

It’s an awful record which presents a major problem. Two of Veracruz’s remaining games are away from home. Opponents Pumas and Tijuana are usually quite strong at home as well, so it’s hard to see Veracruz getting anything from those matches.

The single remaining home game isn’t easy either. Monterrey are one of the strongest sides in Liga MX, and are the second top scorers in the division. Los Rayados’ attacking threat could kill-off Veracruz’s chances, as they’ve only found the back of the net eleven times this campaign.

Veracruz are generally known for being the most direct side in Liga MX. At 67.2%, their passing accuracy is the lowest in the league this Clausura.

Under Carlos Reinoso, Veracruz would often play with a highly immobile front two of Eduardo “Lalo” Herrera and Javier “Chuletita” Orozco. They kept games tight, and attempted to knick goals from counters and set-pieces.

Juan Antonio Luna is now the man in charge, and a change has been witnessed in Veracruz’s two previous matches. This is perhaps due to the strength of their opponents, Necaxa and Puebla. Luna’s side have had more of the play, and interestingly he’s gone without a recognised striker, using Ángel Reyna as a false-nine.

Didn't think I'd be saying this, but Ángel Reyna's still got it. Outstanding so far today.

Against Pumas, Tijuana and Monterrey, Veracruz will probably have less of the ball, so counters will be crucial. The pace of Daniel “Keko” Villalva and Adrian Luna on the wings gives them hope of causing damage on the break.

Late payments of players, reversal of a sacking, victories against Toluca, Tigres, América, Chivas, defeats against, well, almost everyone else. There’s no other club quite like Chiapas.

Like Veracruz, Chiapas have just one home game remaining, but the schedule has been kinder.

Trips to Querétaro and Atlas are sandwiched around a home fixture versus Santos Laguna. Chiapas are capable of picking up points from all three, but considering their bizarre season, it’s impossible to know what to expect from Los Jaguares.

Chiapas have played some remarkable football at times this season. Many of their players are superb at playing in tight spaces and keeping hold of the ball, and the fluid, short passing game is very easy on the eye. Few sides in the world are capable of stringing together intricate passes in the way that Chiapas have during parts of this campaign. At it’s best, it’s been footballing art.

I'm in awe of Chiapas tonight, they're on another planet. Never seen this level of short pass and move football in #ligamxeng before.

The style has next to no substance though. For all their incredible build-up play, Chiapas have found the back of the net on just 24 occasions across 2016/17. Explaining why is difficult, but the failure to find a consistent starter up top is certainly a major contributing factor.

Defensively, Los Jaguares are far too often a mess. Their fluid movement when in possession can leave a complete lack of shape when they lose the ball, so opponents regularly punish Chiapas when they transition from attack to defence.

Also, the decision to bring Aquivaldo Mosquera back into Liga MX has proven disastrous. A top defender in his day, Mosquera looked well past his best, and too slow, when he last played for Pachuca in the 2015 Apertura. Chiapas played without the Colombian for their first seven Clausura games, and conceded a rather impressive eight goals. In the seven games since, Bueno’s men have let in 16.

The arrival of Mosquera also led to a change in formation. The 4-4-1-1, which often lacked any defensive players in the midfield, has been replaced by various systems including three centre-backs. The key to their play remains Jonathan Fabbro, Dieter Villalpando and Luis “Quick” Mendoza, and unfortunately injury has prevented the trio from playing together much recently.

Morelia are paying the price for their horrendous 2014/15 season, when they earned just 23 points. Although you could argue that they’re fortunate that Mexico’s relegation system, which takes into account results across three full seasons, saved Morelia from the drop that campaign.

Considering Necaxa’s impressive Apertura, which all but ruled Los Rayos out of a relegation battle, Morelia have done really well to drag Chiapas and Veracruz into the descenso picture. La Monarquía have won 15 points more than Chiapas across the 2016/17 season, and 11 more than Veracruz.

Taking this season’s records into account, Morelia appear the most likely to remain in Liga MX. The next two games offer great potential to pick up points as well. Away at Necaxa, who haven’t won at home in their previous five games at Estadio Victoria, followed by a home match against Pumas, usually poor away.

However, the Copa MX final may be an unwanted distraction and source of fatigue, and if the next two fixtures aren’t fruitful, gaining anything from a trip to Monterrey will be very tricky.

For much of last season, Morelia were one of the most exciting sides to watch in Liga MX. A combination of the classy Raúl Ruidíaz and Diego Valdés up top, frightening wingers, an attractive style, and one of the most error-prone defences in recent memory made Morelia highly entertaining.

This goal by Raul Ruidiaz is the #Cruzazuleada trigger, as Morelia forces a 1-1 draw vs La Maquina from it. ? pic.twitter.com/jVkBjk8jbU

After a couple of managerial changes, Monarcas have played rather more defensively in the Clausura. They scored 28 and conceded 34 during the Apertura. In the second half of the season, their record reads 12 for and just 13 against.

Morelia may have provided less entertainment during the Clausura, but they still play some attractive football.

The key to finding goals is Raúl Ruidíaz, a complete forward who is capable of dropping deep and creating as well as leading the line. The Peruvian is well-supported by Valdés (the number ten), and two of the plethora of talented wingers available to Roberto Hernández.

FutMexNation experts have their say on who will go down…

Joely Aceves: At the start of the season I expected the Red Sharks to avoid the drop. They had a capable coach in Reinoso and a squad familiar with his tactics. However, many off the field problems have plagued the team and Jaguares- my top relegation candidate given their inability to pay players on time- have been a revelation.

Steve Graff: Veracruz, at least this Veracruz team, is the sentimental favorite among many to go down because they bought their way into Liga MX to begin with. But without all the beef, I think Veracruz have the most difficult path to safety going forward, so they probably will go down.

John Jagou: Veracruz. Have toughest schedule, worst front office. But they will buy their way back into LigaMX. They always do.

Tom Harrison: I can see Veracruz getting something against Monterrey, and if Mosquera continues to start, Chiapas may well lose their three remaining matches. So I’ll say Chiapas. Partly in the hope that I’m wrong.