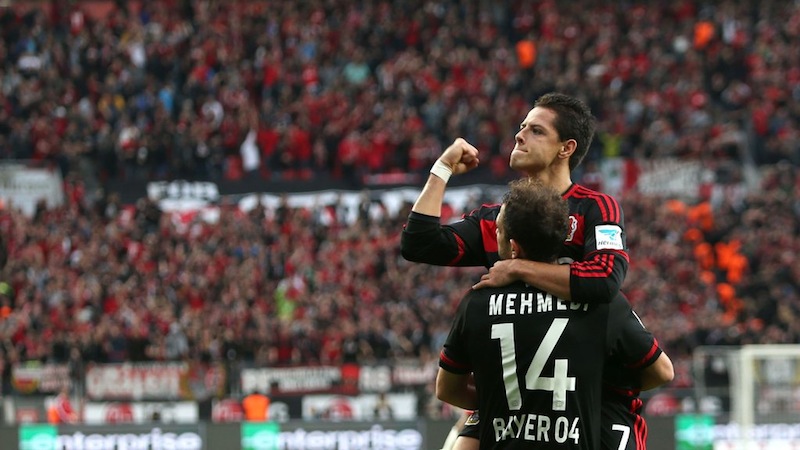 ‘CHICHARITO’ IS ON FIRE!

Whatever slump Javier ‘Chicharito’ Hernandez was in last year seems to be over after he scored a brace during Bayer Leverkusen’s 3-1 victory over FC Augsburg. ‘Chicharito’ was involved in every part of the match, helping create the play that helped Bellarabi score the first goal in the 23rd minute and then for both of his goals, he made intelligent decisions to look for the open spaces close to goal.

In Chicharito’s last four starts with Leverkusen he has had one assist, one goal, a brace and another brace. He’ll have his first Champions League match of the year on February 21st against Athletico Madrid and should he get the starting position, it should be a good performance to watch.

Jonathan Dos Santos and Villarreal took on Roma on Thursday for the first leg of the Europa League’s Round of 32. Jonathan Dos Santos played the full 90 minutes of the match but unfortunately, was dominated by Roma. The first goal for Roma came in the 32nd minute of play when Brazilian midfield Emerson scored a strong goal outside the 18-yard box.

During the second half, Jonathan would attempt to create opportunities up top but defensively, Villarreal was ineffective and allowed Roma to score three goals in 20 minutes.

The match would end 4-0, giving Roma a significant advantage going into the second leg.

The debacle against Roma seemed to have added pressure to Villarreal as they took on Carlos Vela’s Real Sociedad on Sunday. There was still clumsiness from Villarreal who created far more opportunities than Real Sociedad but failed to get the ball into the net. Many of the shot flew over the goal or unluckily hit the post. Carlos Vela was given the full 90 minutes but failed to execute much during the game. Jonathan was subbed out during the 68th minute, giving him sufficient playing time as well as a chance to shake off a strange week for Villarreal. Though the second leg against Roma might be difficult, hopefully he and Villarreal will have worked out a strong game plan.

Third place PSV took on NEC Saturday in a regular season match where Hector Moreno played the full 90 minutes and Guardado was giving the majority of the match. The game was pretty leveled during the first half; PSV scored in the 20th minute and NEC quickly reciprocated in the 30th. During the second half, PSV dominated and with Guardado helping out in the middle, the chances and spaces opened up for the team. Ramselaar would kick off the domination by scoring in the 55th minute of play. Even after Guardado was subbed out in the 88th minute, Hector Moreno got in on the attacking side and had a brilliant attempt at goal where he chipped shot unfortunately hit the post. PSV remains undefeated in 2017 and secure Moreno and Guardado as some of the strongest Mexicans abroad.

Raul Jimenez Does A Lot in Little Time

Raul Jimenez has been easing his way back to playing time with Benfica following his recent injury. He was subbed into Benfica’s season match against Sporting Braga 72nd minute. However, it was quality over quantity for Jimenez this weekend, helping assist the game-winning goal scored by Mitroglou in the 80th minute. Raul Jimenez was given the same amount of time during his Champions League match against Borussia Dortmund on February 14th but his work ethnic will need to speak for him as he gets back into form on the field.

Ochoa had very little challenges Friday afternoon in Granada’s 4-1 over Real Betis. Granada played the majority of the match in a synchronicity not really seen since their victory over Sevilla back in March. The key player during the match, Ramos, scored two goals and maintained momentum throughout his whole performance. Despite Andreas Pareira getting a red in the 66th minute (after having scored in the 33rd minute), Granada was the dominant team both on the scoreboard and throughout their performance.

It is a positive change from the usual performances Granada gives but even through the positive, the defensive problems were exposed when Real Betis deprived Ochoa of a clean sheet in the 75th minute.

Diego Reyes played the full 90 minutes against Real Madrid Saturday morning but was unable to stop the attacking side. Real Madrid won the match 2-0 and Diego Reyes appeared timid. In the first goal from Morata, the assist given to him by Isco was created from a lack of challenging from Reyes and his supporting defenders.

Espanyol’s next match is against Osasuna on February 26th.

Jesus ‘Tecatito’ Corona started and played 90 minutes on Friday in Porto’s match against Tondela. Porto struggled to find the back of the net during the first half but quickly turned in around in the second half. After Ruben Neves scored in the 54th minute, Porto found their rhythm, scoring three more goals in last 30 minutes of play. The awarded time to ‘Tecatito’ was beneficial and allowed him to contribute to the plays that secured Porto’s win.

Porto’s 4-0 victory jumps them up to first place with 53 points but Benfica (Raul Jimenez) still have a match tomorrow against Braga that could see the standings change.

Miguel Layun would be subbed in during the 69th minute. Hector Herrera was benched.