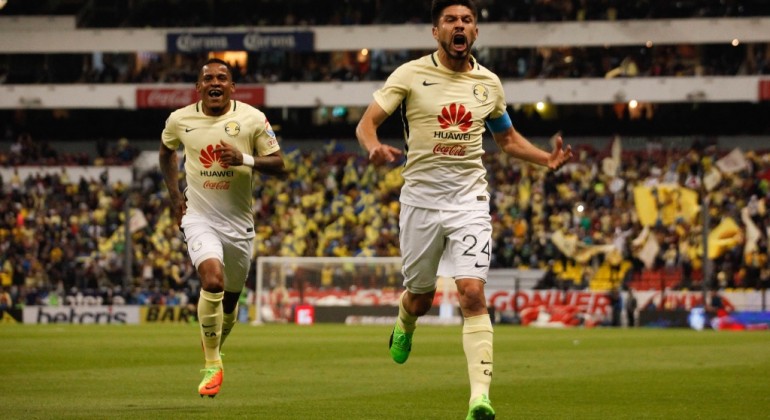 31 goals in 9 games, Liga MX returned to its crazy, thrilling best this jornada. Here’s Tom Harrison with his weekend review.

It was the same old story for Cruz Azul, a failure to turn possession into a result. La Máquina had 64% of the ball during Clásico Jovén, but managed just 2 shots on target, compared to América’s 7. In many ways, Cruz Azul’s possession style played right into the hands of América, who like to counter under Ricardo La Volpe.

América’s hero on the night was Oribe Peralta, who scored more than once during a league game for the first time since last July.

“El Cepillo’s” first came directly from a corner. Peralta did really well to beat his markers at the near post, but Paco Jémez will certainly not be impressed with his side’s defending.

Mirroring the Apertura edition of Clásico Jovén, victory for América has helped to slightly ease the pressure on their under-fire head coach. Meanwhile, Jémez’s side have slipped to 17th in the table, and don’t appear to be improving.

This match perfectly typifies Cruz Azul at this point. Solid play with the better of the action. Can't score. Lose miserably. #ligamxeng

After Toluca’s loss to Puebla, Chivas had the opportunity to move into 1st place, if they won at Chiapas.

With Chiapas below-par in the 1st half, Chivas took full advantage as they eased into a 2-0 lead. It seemed like a question of how many Chivas would score, but extraordinarily, the game turned completely on its head during the 1st 10 minutes of the 2nd half.

Chiapas tore Chivas apart at the start of the 2nd half, scoring 3 goals in 4 minutes, and it could have been more. This was a remarkable sight as despite Chiapas’ attacking talents and attractive football, they’ve struggled to score goals this season.

Chiapas have just scored 3 goals in 4 minutes after scoring 14 in 2,160 minutes.

Chivas threatened a late come back when Rodolfo Pizarro made it 4-3, but weren’t able to find a dramatic equaliser. What could have been their 5th win in a row in all competitions, ended in a very disappointing defeat, which once again demonstrated the parity within Liga MX.

Monterrey lost their unbeaten record for the Clausura after Friday night’s defeat at Tijuana. A dominant performance from the hosts, Monterrey were second best all night, and failed to manage a single attempt on target.

One of the keys to Tijuana’s success so far this season has been their ability to replace Dayro Moreno and Gabriel Hauche, who both departed after the Apertura. Ignacio Malcorra and Paul Arriola have both stepped up recently, and another forward produced on Friday, Juan Martín Lucero. Lucero gave Los Xolos the lead from close range after good work from Malcorra and Avilés Hurtado.

Malcorra would later double Tijuana’s advantage, and seal the points, with a beautiful free-kick.

This result and performance was a set-back for Monterrey, who’ve looked somewhat near their best in recent weeks. But they can be excused for slipping up at Estadio Caliente. Tijuana have now won an extraordinary 11 of their previous 13 matches at home.

Time to take notice of Querétaro?

After a crazy 4-3 victory against Pumas, Querétaro now have 3 wins and 1 draw since Jaime Lozano has taken over. Perhaps it’s time to take more notice of Los Gallos Blancos, who are now placed inside the top-8.

Querétaro seem revitalised under their new manager. After failing to score in their 4 games this season, Querétaro now have 11 goals from their 4 league games under Lozano. Los Gallos Blancos appear to have more freedom in their play, with plenty of movement and forward runs from the likes of Luis Noriega, Jaime Gómez, Edgár “Pájaro” Benítez and Ángel Sepúlveda. This movement, and freedom to push forward seems to have been very effective, considering Querétaro’s recent goal tally.

However, too much could be read into recent games, particularly the win over Pumas. Pumas are consistently poor away from home and gave away goals on Saturday. 3 of Querétaro’s 4 goals came from defensive errors by Pumas players.

Also, this may not be a long-term change. Teams often experience a short-term boost when a new coach comes in. The energy, movement and freedom of Querétaro’s players may be more due to improved confidence or willingness to prove themselves to their new boss, rather than tactical changes.

Lozano does come across as a tactically-minded coach though, for example, taking notes during matches, and clearly impressed powers that be whilst climbing up the Gallos ranks. Improved results may only be in the short-term, but it’s time to take a bit more notice of how Querétaro, and Lozano, are progressing.

Hernán Cristante gets it all wrong as Puebla dismantle Toluca

Puebla earnt a surprise 3-1 victory at Toluca on Sunday, with the visitors impressing many with their dominant performance.

Whilst Puebla deserve plenty of credit for the win, and front 2 Alexis Canelo and Jeronimo Amione were superb, causing problems throughout the match, the main factor in the game was Toluca’s poor tactics.

Hernán Cristante brought in Carlos Esquivel for Jesús Méndez for the game, leaving Antonio Ríos as the only defensive-minded midfielder for Toluca. Toluca also adopted a high defensive line, probably in an attempt to compact the game into Puebla’s half.

But it didn’t work at all. The lack of defensive cover in midfield gave Puebla plenty of time and space in front of Toluca’s defence, whilst the high line meant there was space in-behind as well. Puebla exploited this space regularly throughout the match, with Toluca’s old backline unable to deal with Puebla’s movement and through balls.

It's 2, could be 5. Toluca terrible. #ligamxeng

The defeat, which could have been heavier, was a setback for Toluca, but could prove a huge moment in their quest for the Liga MX title. If Cristante can learn from this game, he won’t make the same mistakes in the future.