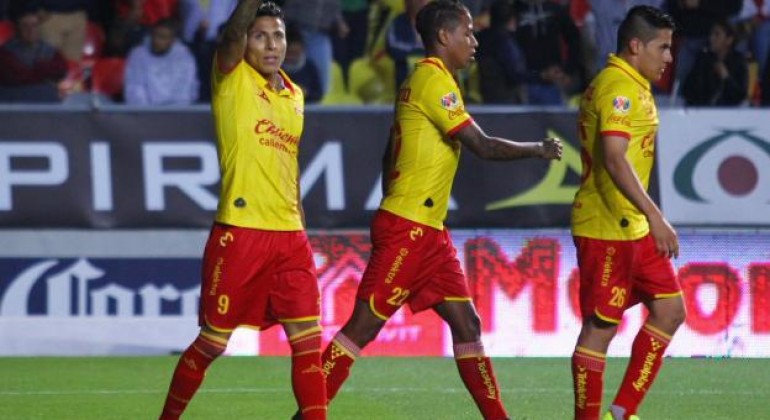 Can you believe it? We’re past the half-way stage in the 2017 Clausura already! Now that we have a good idea of who’s in and out of form, and each side’s regular line-ups and tactics, it’s all about the race for liguilla, and the race to survive relegation. As ever, Tom Harrison has you covered with his weekend review.

Morelia move above Veracruz in the relegation table after tight victory

In a close relegation battle, Monarcas Morelia earned a huge 3 points against direct rivals Veracruz. Morelia began the jornada in last place in the relegation table, but have now leapfrogged Veracruz into 17th. One point above Los Tiburones Rojos.

The only goal of the encounter came in the 71st minute, courtesy of Raúl Ruidíaz. Morelia’s Peruvian star smashed home from the penalty spot after Emanuel Loeschbor was taken down by Kristian Álvarez.

Cool as liquid nitrogen, Raul Ruidiaz got Morelia out of the drop zone courtesy of this second half PK. ? #LigaMXEng pic.twitter.com/Qmbw7wWwg0

Veracruz rarely threatened, only managing 2 shots on target, and have now failed to score in their previous 4 Liga MX games. This is a highly concerning stat for a side that now occupy the single relegation spot.

Morelia have now beaten direct rivals Veracruz and Chiapas in their quest to beat the drop, and currently look in better shape than Veracruz to remain in Mexico’s top flight. However, there’s still plenty of time for twists and turns in the relegation battle.

Chivas had the opportunity to move into 1st place last weekend, but threw away a 2-goal lead in Tuxtla Gutiérrez in extraordinary fashion. Fortunately for Matías Almeyda’s side, Tijuana’s defeat to Pachuca on Friday night meant that victory over Toluca would move the Guadalajara side top of the pile.

Pulido’s place in the side has been heavily questioned in recent weeks, particularly after Chivas looked more dangerous going forward with Ángel Zaldívar as their lone striker during Clásico Tapatío. Almeyda has persevered with Chivas’ highly expensive acquisition though, and got his reward on Saturday.

Both of Pulido’s goals on Saturday were well taken, and came about due to clever movement, which created the shooting opportunities.

It’s easy to forget that not long ago Chivas were in a relegation battle, and going top is evidence of a major turnaround for since Matías Almeyda took over. Aided by a large budget and multiple high profile signings, Chivas have once again become a force in Mexican fútbol, and look as likely to win liguilla as anyone else right now.

Tigres’ poor start to the season has left the Apertura champions languishing near the bottom of the table for the majority of the Clausura. As we moved into the 2nd half of the Clausura, it was important that Tigres didn’t allow themselves to get cut off from the top 8, and they did just that with victory at Puebla.

As ever, Tigres dominated possession, but weren’t able to create too many goal scoring opportunities, and managed just 9 shots on goal.

However, the Monterrey side were able to get in-behind Puebla on a couple of occasions, and made the most of those cases with 2 rebound goals. Jesús Duenas got the first, in the 35th minute, before Eduardo Vargas bagged his first ever Liga MX goal.

The victory has made the table significantly better reading for Tigres fans. Ricardo “Tuca” Ferretti’s side are up to 12th and sit just 1 point off 8th placed Santos Laguna.

With 2 goals against Santos, Nicolás Castillo has moved into 1st place on the Liga MX top scorers chart. Both goals on Sunday once again highlighted Castillo’s best attribute, his intelligent movement off-the-ball.

For his first goal, Castillo sees Pablo Barrera cut inside and find some space, giving the winger a bit of time to get his head up and pick out a pass. Knowing this, Castillo makes his run in-behind the Santos defence, and finishes well to give Pumas the lead.

The Chilean’s 2nd goal also came from a Barrera assist. Here, Castillo reads the cross extremely well, to sneak in at the far post and meet the cross just at the right time.

On both occasions, Santos centre-backs were at fault; firstly Néstor Araújo, then Carlos Izquierdoz. The pair failed to spot and track the movement of Castillo, and their errors proved costly. This shouldn’t detract from Castillo though, who forced the errors through his fantastic off-the-ball movement.

The finishing ability of good strikers is often what gets praised, but the key to a good goal poacher is their off-the-ball movement. Put simply, you won’t create a scoring opportunity without the ability to get yourself into the right position at the right time. Nicolás Castillo certainly has that ability.

When a 16-year-old, born post-2000, makes their Liga MX debut, it’s only natural to sit up and take notice. When that debutant plays for América, it makes it even more significant.

After impressing in Copa MX against Santos Laguna mid-week, Diego Lainez was given his Liga MX debut against León. With América trailing by a goal to nil at half-time, despite a man advantage, Lainez was sent on to make an impact.

He did just that. The fearless 16-year-old added a much-needed spark to the América attack, regularly taking on opposing defenders. Lainez’s speed when travelling with the ball and remarkable low centre of gravity, combined with an apparent fearless nature, made him tricky to deal with.

Lainez, this kid has something, reminds of Chucky when he started. It's all about the process, but this kid is special.

Seeing a 16-year-old perform at this level in a strong professional league is extremely impressive. But there’s reason to believe that this early emergence may not be positive for the career of Lainez.

At just 16, it’s unlikely that Lainez has fully matured mentally. Therefore, if he’s hyped up too much, as is often the case with the press in Mexico, Lainez may struggle to cope. The pressure of being a “wonderkid” has proven too much for many footballers in the past, and in Lainez’s case, could certainly reduce his level of fearlessness.

Hopefully this isn’t the case, hopefully Lainez can deal with being seen as a major Mexican prospect, like Hirving “Chucky” Lozano, who scored on his Liga MX debut at 17, has.

Ideally, Lainez will be left realtively untouched by the press, and allowed to enjoy his football and develop in the coming seasons. This, unfortunately, is unlikely.

And a minute later, Joao Rojas stretched Cruz Azul's advantage over Chiapas to 2-0 with this! ? #LigaMXEng pic.twitter.com/jAnUJWVp5K