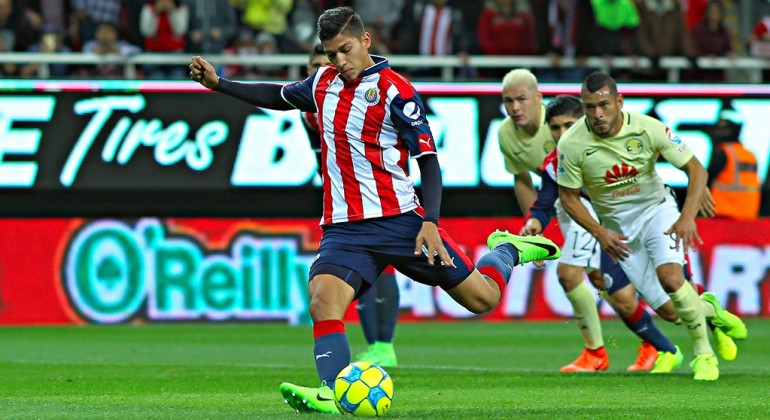 How did your team fare in #Jornada7? Check these results to find out. #LigaMXEng #FutMexNation pic.twitter.com/AEta2bvxlG

Chivas live up to favourites tag in Clásico Nacional

The Guadalajara side lived up their tag as they dominated the derby, with 62% possession on the night. Remarkably, América weren’t able to manage a single shot on target, which is perhaps evidence of the club’s poor management in recent years.

In a scrappy match, Ángel Zaldívar’s penalty separated the two sides. It’s the 2nd time in 2 weeks that the 23-year-old has scored penalties in Clásicos, and “Chelo” deserves plenty credit for keeping his nerve on both occasions.

#FutMexNation Here was how Angel Zaldivar got Chivas the halftime advantage vs America. #LigaMXEng pic.twitter.com/pi02toByw4

With the defeat, pressure will mount on Ricardo La Volpe. Many don’t expect the Argentine to make it through the season.

After failing to score in 5 of their 6 games this Clausura, champions Tigres returned to form on Friday night with a comfortable 3-0 victory in Veracruz.

Goals from André-Pierre Gignac, Luis Quinones, one of three additions to the starting Xl, and Jurgen Damm, from the bench, gave Tigres their 2nd win in 2017. But unfortunately, the match will be remembered for other reasons.

At the end of the game, a minority of Veracruz “fans” climbed over barriers to attack away supporters. With the stadium security seemingly unwilling, or at least unable, to counter the aggressors, Ricardo “Tuca” Ferretti and André-Pierre Gignac became understandably frustrated with the situation.

Whilst Ferretti turned his anger onto a policeman in riot gear that was watching event unfold from the pitch, Gignac was caught on camera saying that Veracruz should down to the 2nd division.

Fortunately, incidents like this are rare in Liga MX, with fans of rival sides regularly sitting peacefully amongst each other. However, the league cannot be complacent, and have opened a disciplinary investigation into the violence.

With Tijuana leading 1-0 as the 2nd half in Mexico City kicked-off, the Pumas-Tijuana game went crazy. The 2nd half was one of the craziest periods of Liga MX fútbol for a while, going end to end throughout.

This 2nd half is getting crazy, feels like I'm watching a basketball game. So much back and forth. #LigaMXeng

Goals from Víctor Malcorra and Guido Rodríguez in the 62nd and 66th minutes, both assisted by Avilés Hurtado, put Los Xolos 3 goals to the good, and the away side must have expected to go away with the points at this stage of the game.

But Pumas fought back, and scored 3 goals between the 72nd and 82nd minutes. Chilean Nicolás Castillo was the catalyst to the stunning comeback, scoring the first and forcing the equaliser, an own goal by “Topo” Valenzuela.

Hopefully this thriller is a sign of more to come in liguilla, which both sides will expect to play a part in considering their strong starts to the Clausura.

La Máquina have been like a broken record for far too long. Cruz Azul have consistently failed to turn dominant displays into results due to being poor in both final thirds. They’ve now won 5 of their previous 30 Liga MX matches.

Paco Jémez was brought in to change Cruz Azul’s fatal problems. He was a different option, someone from abroad, that hasn’t managed in Mexico before. Along with Jémez, plenty of impressive new attacking signings came in, including Ángel Mena, Martín Cauterrucio and Martín Rodríguez.

However, very little has changed. Cruz Azul are still dominating games, only Tigres have had more possession this year, but are struggling in the final thirds.

Take Saturday’s loss to Atlas as an example. Poor defending from Omar Mendoza, as he let Fidel Martínez take the ball down and shoot inside the box, led to the only goal of the game.

At the other end, Jémez’s side didn’t create much, but found themselves somehow squandering the opportunities they did have. Caute’s open goal miss being the most obvious example.

Despite repeatedly changing things, and constantly having a strong team on paper, Cruz Azul cannot turn around their fortunes, and could find themselves dragged into a relegation battle if their poor form continues. After a dreadful start, pressure is mounting on Jémez, with some expecting the Spaniard to be sacked soon.

Poor start, but Cruz Azul have to give Paco Jémez time IMO. To counter that, it's the same old problems, very poor in both final thirds. https://t.co/QYOkaR8XmF

With key attackers Dayro Moreno and Gabriel Hauche leaving over the winter break, many doubted that Tijuana would be as good going forward as they were last season. But with 16 goals in 7 games this Clausura, it looks like Moreno and Hauche haven’t been missed.

Víctor Ignacio Malcorra and Paul Arriola, both with 2 goals and 2 assists, have done very well since stepping into the places of Dayro and Hauche. Their performances have helped Tijuana get over the winter departures.

However, the team’s strong attacking displays may be more of an indication of how good Avilés Hurtado is. Hurtado now has 4 goals and 3 assists this Clausura, and is Tijuana’s attacking catalyst in the “number 10” role.

Hurtado’s intelligence, technical ability, pace and non-stop movement makes him a nightmare for opposition defenders, and possibly the best attacking midfielder in Liga MX. It’s no wonder that people are starting to suggest that he deserves a Mexico call-up once he’s lived in the country for 5 years.

16 goals in 7 games for @xolos_en after losing Dayro & Hauche. Credit to Malcorra & Arriola, but above all else, proves how good Hurtado is