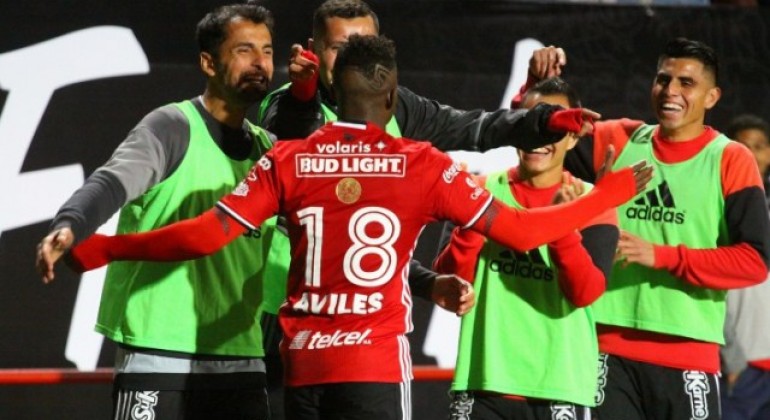 Tijuana marked their 10-year anniversary since formation with a thrilling 6-2 victory over Puebla.

Friday night’s game perhaps wasn’t as straight forward as the score line would suggest. Puebla kept themselves in the match by twice levelling up Avilés Hurtado strikes.

It was only in last 30 minutes that Los Xolos began to run away with the tie, following Paul Arriola’s golazo. A bicycle kick from Milton Caraglio followed, before a sensational Víctor Malcorra free-kick. Fans favourite Joe Corona was also able to get himself on the scoresheet, capping off a great night for Tijuana.

After defeat to Morelia in the opening jornada, and the loss of key forward Dayro Moreno, this was a much-needed confidence boost for a Tijuana side that don’t look as strong or as dangerous as they did during the Apertura.

It would be wise not to read too much into this result though. Puebla had a horrendous night defensively, and many of the goals stemmed from individual errors from Puebla players. Tijuana will certainly face tougher challenges this season.

Nine-man Chivas cling on for point in Monterrey

Chivas got off to a fantastic start in Monterrey, and led 2-0 after 22 minutes. The first of their goals was quite remarkable, as Rodolfo Pizarro grabbed his first goal for the Guadalajara side with a stunning volley that fell from a great height.

But a lack of discipline let Los Rayados back into the game. “Gallito” Vázquez was first to see red, and fully deserved to be sent off for tackle that certainly used excessive force. Then Jair Pereira, who was quite unlucky, was shown two yellows in quick succession, the second being for dissent.

Monterrey pressed, and the comeback seemed inevitable after Rogelio Funes Mori bundled home in the 56thminute. Dorlan Pabón found the equaliser 15 minutes later. The Colombian often squanders good possession with his shoot on site policy, but it worked on this occasion, as he beat Rodolfo Cota from distance.

With 19 minutes left in the game, and just 9 men, Chivas will be rather pleased to come away with a point, particularly when considering that Monterrey had a ridiculous 41 shots on goal. However, Matías Almeyda may be left wondering what could have been had his players been more disciplined.

This has to be a Liga MX record, right? Monterrey launched a total of 41 shots against Chivas on Saturday. pic.twitter.com/ig90D1DJjU

In the clásico that isn’t quite a clásico, it was Pumas that came away with all three points, as an excellent Nicolás Castillo volley settled the tie.

The hosts would have to accept that they rode their luck on Sunday though. Firstly, Pumas benefitted from a controversial straight red card for Gabriel Penalba, which allowed Paco Palencia’s men to take charge of the match.

Then, as Cruz Azul threatened on occasion, despite the man deficit, Pumas were aided by poor finishing from the visitors. La Máquina failed to find the back of the net from seven shots inside the box, including two scuffed chances.

Nicolás Castillo scored his first goal for Pumas on Sunday, but picked up two yellow cards

15 shots to 14, three goalkeeper saves each, and two golazos to one penal. Toluca-América was an even game, which the hosts edged.

However, there’s little parity in the way that Toluca and América have prepared for this Clausura.

Going into their centenary year, Toluca have geared themselves up for a title challenge. Their main method of building has been the signing of quality, experienced players in the previous two windows. Osvaldo González, Jesús Méndez, Pablo “Pitu” Barrientos, Rubens Sambueza and Gabriel Hauche are all in their 30’s, but have the class to help bring instant success to Toluca.

Pablo Barrientos has become one of my favourite players to watch in Liga MX. Superb technically, very intelligent, and such a classy player.

Los Diablos Rojos also showed patience in sticking with Hernán Cristante despite his failure to make liguilla in the Apertura. Cristante has now figured out his favoured system, and his players appear comfortable in that tactic, with plenty of fluid play on show so far this season.

On the other hand, América don’t look ready to fight for the Clausura title. Whilst Las Águilas were able to bring in the best keeper in Mexico, Agustín Marchesín, over the winter, they haven’t addressed weaknesses at right-back and central-midfield. América also let go plenty of experience and leadership with the departures of Sambu, Osvaldo Martínez and Moi Munoz.

Furthermore, there’s the unresolved situation with Carlos “Darwin” Quintero, who started on Sunday despite being heavily linked with a move away.

Tactics-wise, Ricardo La Volpe was forced to change his system at half-time, adding another defensive player, after Toluca dominated the first-half. This suggests that La Volpe is unsure of his first-choice tactic.

This lineup really reminds me of the Matosas days. Very offensive and not much of a balanced midfield.

It would be a surprise to see either side miss out on the play-offs, but right now, prepared Toluca look in much better shape to go deep in liguilla.

Ángel Reyna’s still got it, much to my surprise

The last time I saw Ángel Reyna play was in a Copa MX game for Chivas against Mineros de Zacatecas. He was absolutely dreadful, miss-placing simple passes all game long. When he left for Celaya in the Ascenso last summer I wasn’t sure we’d ever see him back in Liga MX.

However, Carlos Reinoso decided to bring back the enigmatic Reyna to Veracruz during the winter draft, and it appears to be a shrewd piece of business.

Veracruz, particularly under Reinoso, have become known for an unattractive (to many), long-ball style, which has included attempting long throws at any opportunity. But with Reyna, Veracruz have some class, some creativity, and some guile.

Reyna twice combined well with Felipe Flores during the first-half, with the second occasion leading to a simple tap in for Eduardo “Lalo” Herrera.

I didn’t expect to be saying either of these things at the start of the season, but Ángel Reyna’s still got it, and I’m looking forward to watching Veracruz again.