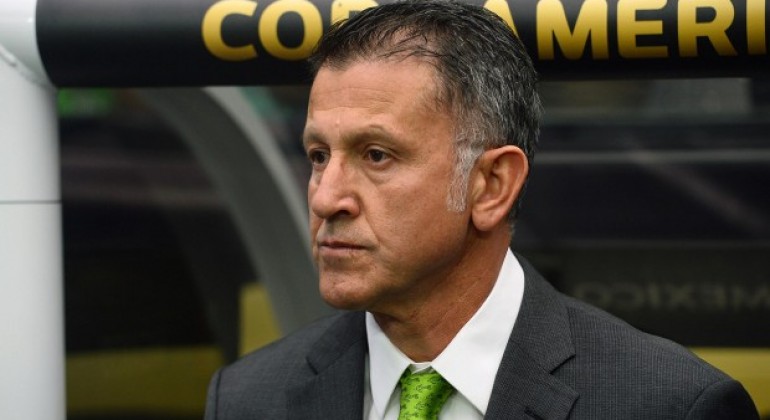 After a very promising start in charge of Mexico, Juan Carlos Osorio faced by far his toughest challenge yet at the Copa América. It wasn’t all negative, with Mexico able to top their group, but the competition ended in disaster for El Tri. Most fingers have been pointed at Osorio following the seven-nil defeat to Chile, including many asking for the Colombian to be sacked. Here, I’ll analyse Osorio’s performance during the Copa, before offering my thoughts on his future.

The mad scientist showed both genius and idiocy

A self-proclaimed disciple of Marcelo Bielsa, Juan Carlos Osorio came up with an experimental system for the group opener against Uruguay. I describe the formation as a 3-1-2-3-1, and the easiest way to think of it is three centre-backs, with a diamond midfield, two wingers and one striker.

It’s extremely rare to see a team line-up without full-backs or wings-backs, but it worked a treat against a narrow, pragmatic Uruguay side that play with cutting-in wide men and full-backs that don’t push forward too much. On the day, Mexico’s wide centre-backs were able to stop the threat of Uruguay’s cutting-inside wingers, whilst anchor man Diego Reyes prevented Nicolás Lodeiro from play-making. It was a genius system.

Lining up with the same system against a completely different Jamaica team was anything but genius. Jamaica, who play with two out-and-out wingers, were able to get down the sides of Mexico’s back-three on a regular basis. If Clayton Donaldson had attempted a few more shots rather than looking to earn penalties, Mexico could have been on the wrong end of an embarrassing result.

Osorio attempted to go toe-to-toe with Chile in the quarter-final, playing an attacking 4-2-3-1 formation with a high defensive line. It didn’t work. Mexico were shown up as an inferior team, as they struggled to retain possession against Chile’s superb team press and committed fatal errors which led to Chilean goals.

Mexico would likely have fared much better by sitting deep, absorbing pressure from Chile and attempting to spring counter-attacks. Osorio was perhaps naïve for not playing this way.

But if Mexico are to have long-term success, and become a country that make the latter stages of the World Cup, rather than consistently falling in the first knockout round, they need a manager with the ambition that JCO showed in the Chile game. Playing defensively and hoping to grab something on the counter may earn the odd impressive result, but it’s unlikely to take you through a whole tournament.

Mexico aren’t currently good enough to go toe-to-toe with a national team as good as Chile, when the opposition are on the top of their game, but they could be in the future. They’re only going to get to that point by being ambitious and having some failures along the way. For this reason, I respect Osorio for the ambition he showed by playing an attacking system against Chile, although I personally would have played with an anchor man and a deeper defensive line.

I’m a strong believer in stability creating solidity, particular when it comes to defending. You don’t need to look far for strong evidence to back up this belief. Take the current Juventus/Italian defence of Buffon, Chiellini, Bonucci and Barzagli, or the Atlético Madrid defence that took them to the La Liga title two years ago; Courtois, Felipe Luis, Godín, Miranda and Juanfran. Both defences had spent years together, and developed superb understanding of each other’s games.

Creating this stability and solidity is very difficult in international football as teams don’t spend much time together, and Osorio exacerbated this problem with his constant changes, particularly in defence.

Firstly, there was the switch in number of defenders fielded; three centre-backs against Uruguay and Jamaica, and a back-four v Venezuela and Chile. Then there was movement of players around the pitch. Rafa Márquez and Diego Reyes both played at centre-back and defensive-midfield during the tournament, whilst Miguel Layún was used as a central-midfielder and a left-back in different games.

Most bizarre of all was the rotation in goal, with all three keepers in the squad used during Mexico’s four games at the Copa. Only on four occasions has a country used all three keepers at a World Cup before, with two of these cases including injury which forced a switch to be made.

With far too many changes, both in terms of formation and personnel, it’s no surprise that Osorio wasn’t able to create a solid Mexican defence.

The FMF cannot expect to create long-term success by regularly firing their managers. Whilst Juan Carlos Osorio hasn’t covered himself in glory during the Copa América, he deserves time.

Looking at the current strength of the CONCACAF region and JCO’s results v regional opponents so far, Mexico should comfortably qualify for the World Cup with the Colombian in charge, so there’s no need to make a rash decision.

Given time, with Osorio’s ambition and tactical knowledge, he may be able to generate success with Mexico. Problems such as the over-rotation of players and formations may be solved if Osorio has more time to work with and learn about his players. Time may also allow Osorio to solve current issues with the Dos Santos brothers and Carlos Vela, which would add quality to the Mexico squad.

A tournament that began with such hope for Mexico fans ended in a disastrous, embarrassing defeat to Chile, and both Osorio and the players deserve criticism for the thrashing. Osorio’s performance in the Copa América has been more negative than positive, but I like his ambition, and some of his experimental ideas. In time, he may be able to refine these ideas, cut down on the rotation, and most importantly, finally get El Tri past the first knockout round in a World Cup outside of Mexico. I hope he gets a chance.