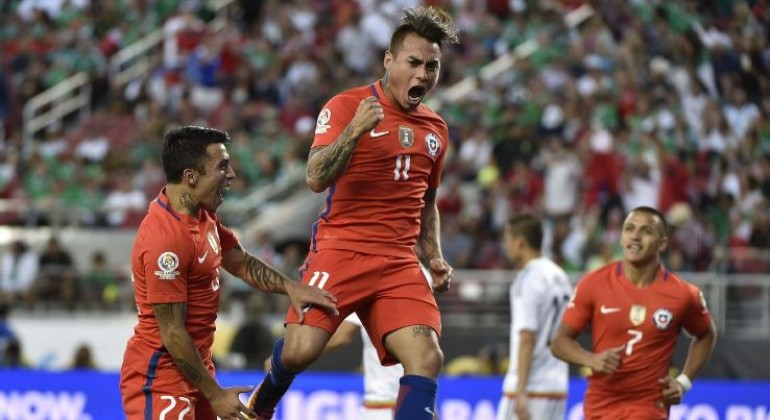 Un fracaso. Mexico went into the quarter-final with Chile with high hopes, but came away with a bruising, and embarrassing, seven-nil defeat. Here’s where it went very, very wrong for Mexico.

Chile don’t play quite the same loco high-press that was introduced by Marcelo Bielsa and continued by Jorge Sampaoli, but the legacy of these managers is still very evident. The work-rate of Chile’s players and the way they support each other when closing down the opposition is highly impressive and admirable, and was perhaps the key factor behind La Roja’s incredible victory.

Under constant pressure from multiple Chile players, Mexico looked rushed and uncomfortable on the ball. As a result, they struggled to play out from the back and retain possession for sustained periods.

With Juan Carlos Osorio playing a high-defensive line, perhaps in an attempt to counter Chile’s high-press, losing possession caused huge problems for Mexico. Far too often it took just one through ball for Chile to get in-behind the high Mexico back line.

On the fairly rare occasion that Mexico were able to get past Chile’s first line of press, they found space at a premium in the final third. Chile’s hard-work was again a major factor in this, for example right-winger Edson Puch tracked all of Miguel Layún’s forward runs. A lack of movement, particularly from Javier Hernández, also contributed to Mexico’s lack of ideas when attacking.

Osorio tried to match Chile, and attempted to play a similar style to La Roja, but Mexico were simply nowhere near good enough to go toe-to-toe with Chile on the night, particularly when trying to keep possession. Both Osorio and the players deserve criticism for this.

Question marks hang over Osorio’s head following the thrashing. Personally, I hope JCO isn’t given the sack after this result, his spell in charge so far has been mostly positive, and it could be argued that it’s good to see a Mexico manager attempting to match the best in the world, even if a pragmatic approach would have been more effective on the night. Given time, Osorio may be able to get Mexico going toe-to-toe with countries of Chile’s calibre.

Every time Mexico lost possession due to Chile’s pressing game, there was danger at the back. The high-line contributed to this, as did Chile’s rapid, incisive passing.

Alexis Sánchez’s goal just after the break, the goal that really put the tie to bed, is the perfect example of how threatening Chile were when Mexico gave the ball away as the goal came directly from a very poor Héctor Herrera touch.

There were other costly mistakes as well. Two goals were scored on the rebound as Guillermo Ochoa could only parry shots out, whilst Héctor Moreno was caught on his heels for Chile’s second goal, which allowed Eduardo Vargas to get in front and score. Whilst Osorio definitely deserves his fair share of criticism post-game, he can’t be blamed for these individual errors.

Most expected to see a 4-3-3 from Osorio, with an anchor man sitting in-front of the back four, but the Mexico boss instead went for a 4-2-3-1. HH was pushed forward into attacking-midfield, as he often has done under JCO, with Andrés Guardado and Jesús Duenas playing as a double-pivot in central-midfield.

Had El Tri fielded an anchor man they would have likely been more solid defensively. A hard-working, strong tackling midfielder, such as Jesús Molina, could have disrupted and broken up the flow of Chile’s attacking moves.

Alternatively, Osorio could have played Rafa Márquez in that role. Whilst Márquez wouldn’t offer the hard-work and physicality that Molina would, Mexico could have benefitted greatly from his leadership abilities and calmness in possession. Captain Guardado wasn’t able to lead in the same way that Márquez can.

This isn’t really a tactical point, but it’s one that has to be made. After Alexis made it three-nil to Chile, Mexico capitulated, seeming to give up to a certain extent.

Whilst the game was more or less over at three-nil, they still had pride to play for. Pride of the fans, both in the stadium and beyond, and their own pride. A seven-nil loss was nothing short of embarrassing, and the Mexican fans deserve an apology for the lack of commitment shown by many of the Mexican players during the second-half.