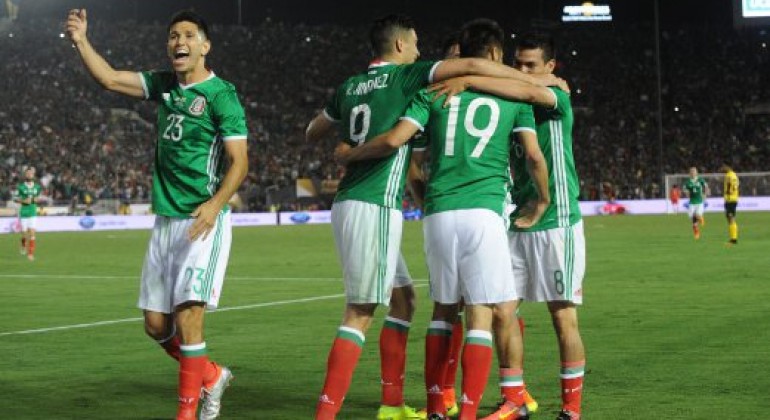 Mexico made it two wins from two at the Copa América Centenario, beating CONCACAF rivals Jamaica two-nil at the Rose Bowl. Despite picking up all three points, the performance was far from impressive and Mexico were fortunate that Jamaica striker Clayton Donaldson had a dreadful night. Donaldson put two one-on-one chances wide, and should have been sent off for two dives, which weren’t given as penalties, but didn’t result in cards.

Mexico’s disappointing display, and, in particular, porous defence have led to many questioning Juan Carlos Osorio’s tactics on the day. Here’s where I think Osorio got it wrong against Jamaica, and where he made the right decisions.

No full-backs or wing backs against quick, out-and-out wingers was a recipe for disaster

In my preview for the game, I wrote that I believed JCO would switch to a four-man defence, including full-backs in the line-up to combat the threat of Jamaica’s quick and tricky wingers. But Osorio didn’t, instead sticking with the 3-1-2-3-1 that served him well against Uruguay. This may have been due to Osorio wanting more height to combat Jamaica’s strength at set-pieces, but you don’t necessarily need to be really tall to defend set-pieces well.

Playing with three centre-backs and no wing-backs is a very rarely used system, but worked well against Uruguay as the wide centre-backs were able to stop Uruguay’s cutting-in wide men from becoming a threat.

It was a different story in the Jamaica game though. Jobi McAnuff and Garath McCleary are more traditional wingers, regularly using their pace and skill to try to go outside of their markers, before putting crosses into the box.

During the first-half McAnuff and McCleary were able to get past Mexico’s wide centre-backs; Héctor Moreno and Néstor Araújo, on an all too regular basis. They were clearly too quick to be dealt with by Moreno and Araújo.

Jamaica’s wingers also dragged Moreno and Araújo wide, leaving plenty of space through the middle of the pitch to be exploited. Clayton Donaldson really benefitted from this, and on a better day the Birmingham City forward would have found the back of the net.

The problem created by Jamaica’s wingers and Mexico’s lack of full-backs or wing-backs was exacerbated by El Tri consistently giving the ball away. This gave Jamaica plenty of opportunities to hit on the counter-attack, before Mexico’s midfield could get back to support the defence.

Osorio clearly learnt from his side’s defensive frailties in the first-half, switching to a 4-3-3 at half-time. Miguel Layún moved to right-back, whilst Moreno was shifted across to left-back.

Mexico were significantly more comfortable in this system, and Jamaica weren’t able to create as much threat when going forward. However, with El Tri still unnecessarily losing possession on a regular basis, The Reggae Boyz were able to create some chances when countering.

Considering how poorly the starting tactic performed against a side with traditional wingers, I expect Osorio will have learnt from this. I’d be surprised if Mexico use this formation against another side with out-and-out wingers.

Whilst JCO wouldn’t score highly for starting line-up and tactic, his substitutions were spot on. In similar vein to the Uruguay game, Hirving “Chucky” Lozano had a major impact from the bench, causing havoc in the Jamaica defence with his direct running on and off the ball.

Another sub, Oribe Peralta, was able to put the game to bed with a cool finish in the 81st minute. Whilst Jesús Molina, who replaced another Jesús, Duenas, increased Mexico’s defensive solidity late in the game when Jamaica were taking more risks to try to find an equaliser.