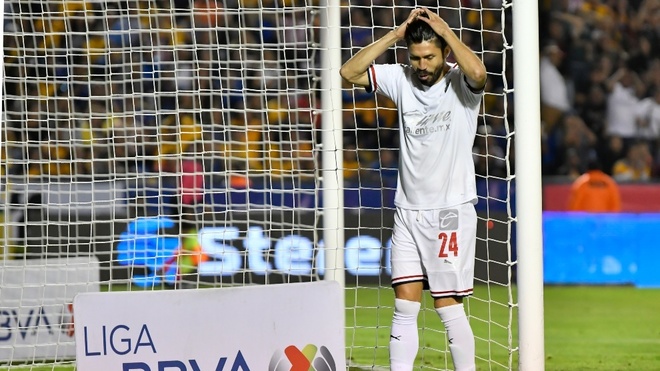 Watching a Liga MX match is like watching an artist take a blank canvas and create their art. Sometimes you get true masterpieces like the realism of Leonardo da Vinci’s Mona Lisa or Vitruvian Man, other times you get fun takes like that of Walt Disney or Bill Watterson. Then sometimes you get abstract art like Jackson Pollock, the weird surrealism of Salvador Dalí, or even the modern dystopian collage art of Winston Smith that often doesn’t make sense, until it does. Liga MX often veers into the latter, with perhaps the best representation being Frida Kahlo. Kahlo’s artwork seamlessly blends beauty and realism with anguish and surrealism, much like Liga MX. One minute the soccer is beautiful and the next it’s bizarre.

1.) The end of the Puebla-Santos game was surreal – Going into the 90th minute, Santos had a 2-1 lead and had seemed poised to grind the game out through the six minutes of stoppage time. In the third minute of stoppage though, Puebla is awarded a free kick deep in Santos territory. Goalkeeper Nicolás Vikonis is the mix as an extra attacking option, but the free kick goes directly to Jonathan Orozco. Orozco could have taken his time with this to take even more precious time off of the clock, but he spots Diego Valdés halfway down the field heading toward an open net and kicks the ball down to Valdés (while being run into by Vikonis). Valdés gets the ball and takes a touch to settle the ball but has the ball taken off of his foot by a Puebla player and while Valdés pleads his case, the play continues. The ball is played in to Christian Tabó, whose centering pass deflects off of a sliding Cristian “Polaco” Menéndez and goes in to tie the game. Then as the game goes into the last minute of stoppage, Tabó is taken down in the box and a penalty is awarded to Puebla. On the ensuing kick, Osvaldo Martínez seems to slip on a loose piece of turf and misses the mark with the shot and the match ended 2-2.

2.) Oribe Peralta’s miss from point blank range was art –  It’s not often a miss from point blank range can be described as art, but Peralta missing from inches was art. It was both beautiful and grotesque, exhilarating and agonizing, comical and grave. It was all of those things in one swift motion and as good art is, it very much depended on your point of view what you took away from it.

3.) Cruz Azul goes down a player and then scores two goals – Usually teams that go down a player are the ones that concede goals and lose but like good art, Cruz Azul challenged convention and forced the viewer to reconsider what was possible by scoring two and pulling out a 3-1 win over Pachuca. Twelve minutes after entering the match, Pablo Ceppelini was sent off in the 74th minutes for a clumsy tackle on Oscar Murillo. Instead of bunkering and trying to grind out a draw, La Maquina drew a penalty when Elías Hernández was taken down in the box. Jonathan “Cabecita” Rodríguez converted in the 82nd, and then in the 85th minute they were able to tack on an insurance goal when Juan Escobar made a lung-busting run up the right flank to take the outlet pass and hit a shot through the legs of goalkeeper Alfonso Blanco.