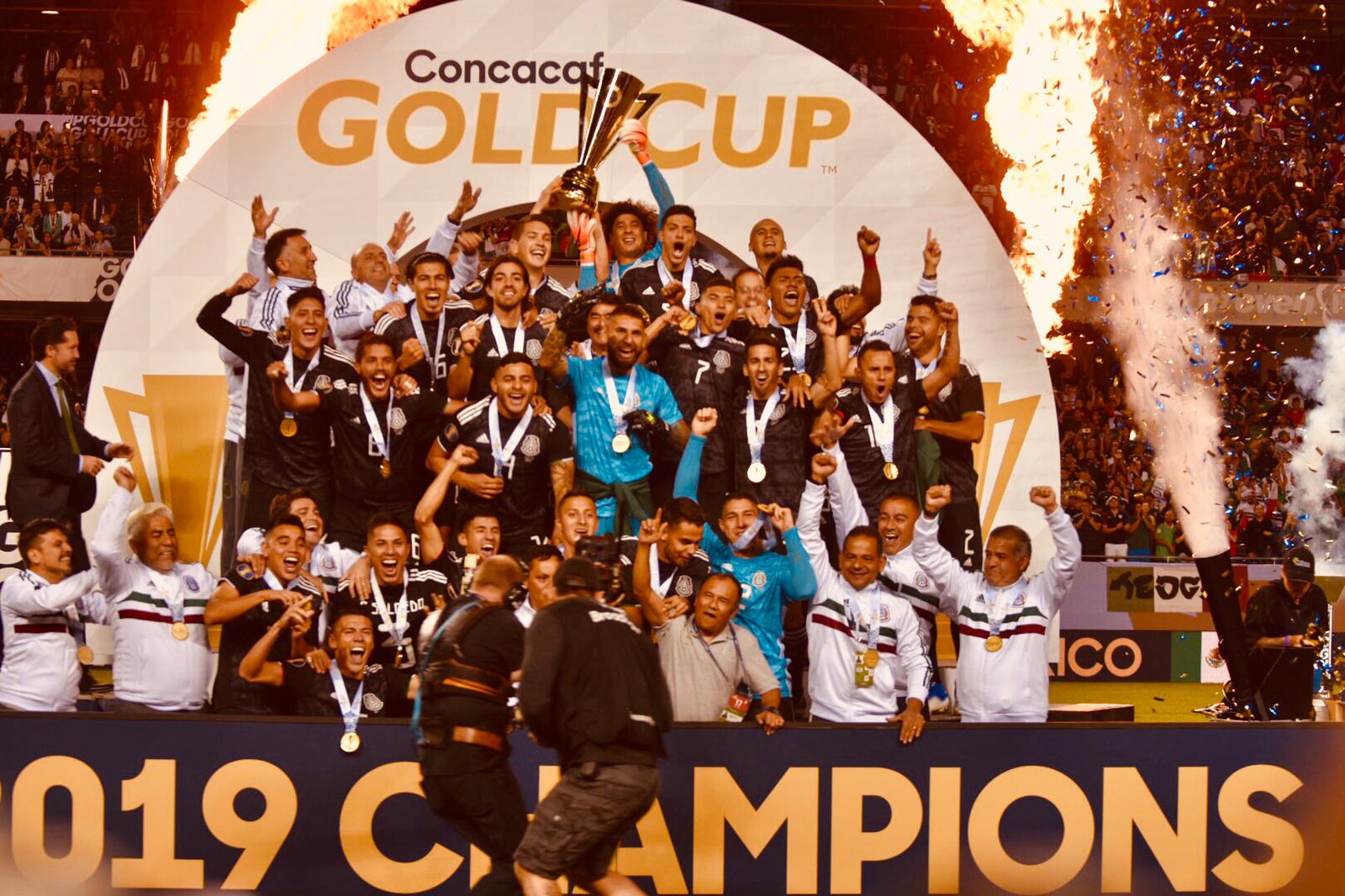 CHICAGO, Illinois, United States. A seventy-third minute goal from Jonathan Dos Santos was enough for Mexico to defeat the United States to win the 2019 Gold Cup, its eighth CONCACAF Continental title during the Gold Cup era.

El Tri were able to escape early danger, when Christian Pulisic and Jozy Altidore both evaded the Mexico defensive line to fire on frame only to see their shots travel wide of Guillermo Ochoa’s goal.

In the first half, El Tri were able to muster some pressure on USA goalkeeper Zack Steffen’s goal as Uriel Antuna, Raúl Jimenez, and Jonathan Dos Santos all manages to force either force Steffen to catch on the shot, or think about shots that traveled wide of his goal.

But the genuine chances in the first half were otherwise scarce. When Mexico were trying to build from the back, they found the USA forward line on them at the first possible moment. And the game took a physical turn with the refereeing crew often refusing to book high or hard tackles. The turn had created scares for El Tri as Rodolfo Pizarro and Guillermo Ochoa both received treatment during either the first half or the intermission for injuries.

To start the second half, the match seemed to turn as El Tri returned to an approach of short passing and sought to get into better receiving positions. The changes, helped by an ill-timed defensive switch by the United States, helped El Tri to hurt the Stars and Stripes’ goal more frequently.

The connection between Rodolfo Pizarro and raul jimenez that helped to produce half-chances during the first half resulted in much more dangerous chances as the connection produced an early warning shot that didn’t miss the goal by much. Raúl Jimenez, via a long shot from Edson Alvarez in the 64th minute, and Andres Guardado also came close to opening the scoring. It was Guardado who tried to do so twice, first directly on a free kick 54!minutes into the match and then on a corner kick in the same minute.

Eventually, the ball circulation that led to Mexico’s earlier chances put Mexico in front. On a transition with multiple triangulations in the 73rd minute, Rodolfo Pizarro played Raúl Jimenez into the center of Mexico’s attacking third. Recognizing he could be dispossessed quickly from the 1-vs-1, Jimenez laid the ball off to Jonathan Dos Santos who beat Zack Steffen with a rising shot to open the scoring.

Recognizing their deficit, the Stars and Stripes gained the attacking initiative and increased the pressure on Guillermo Ochoa’s goal. Three saves late in the match by Guillermo Ochoa, including efforts off of set pieces by Daniel Lovitz, helped El Tri seal a tight victory that left many questions of the national selection when World Cup qualification begins.

For now, El Tri is celebrating manager Gerardo Martino’s first continental title as manager.El  And Martino should now have more autonomy to select the players he wants without being asked about missing stars.

El Tri do not have much of a break from international competition. They play the United States in East Rutherford on September 6 and Argentina on September 10 in friendlies that will take place in San Antonio before traveling to the North Atlantic on October 11 to take on Bermuda in their first CONCACAF Nations League match.

As for the United States, they will face El Tri in the same September 6 friendly before facing Uruguay on September 10. The United States opens its CONCACAF Nations League campaign on October 11 against Cuba.