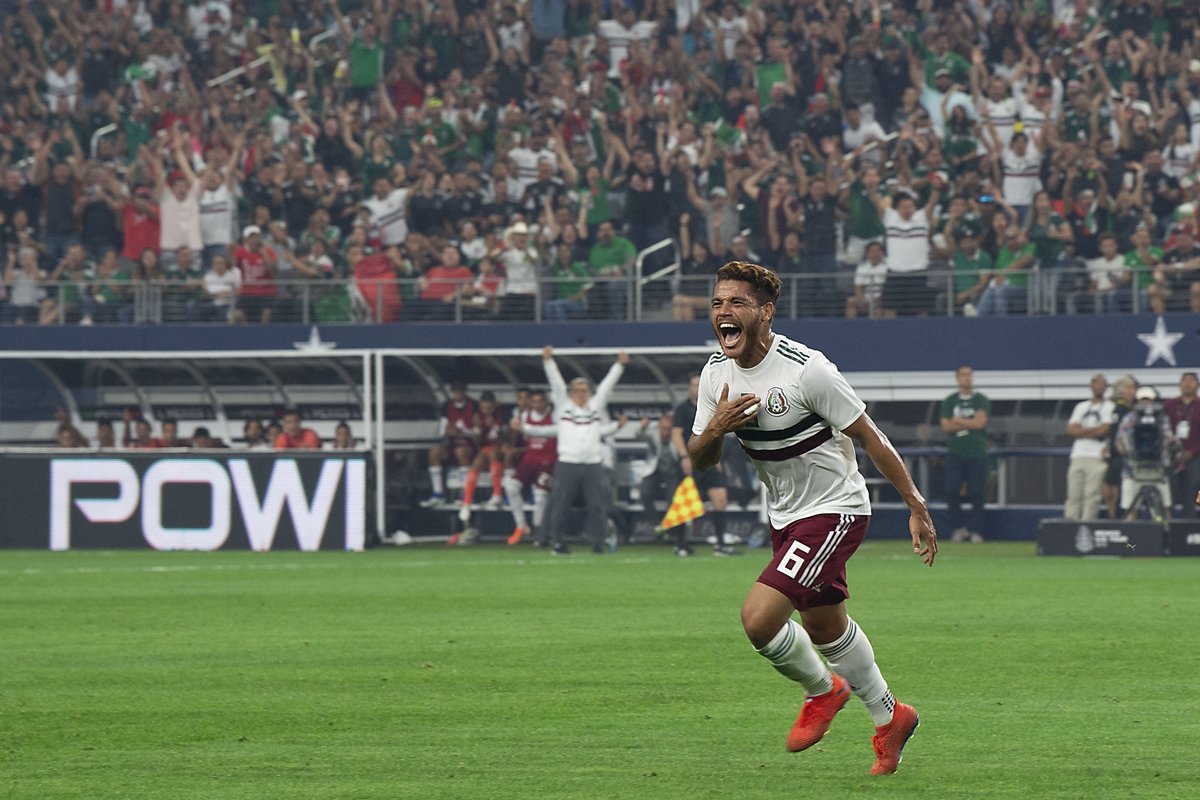 ARLINGTON, Texas, United States of America.  El Tricolor concluded its Gold Cup preparation with a 3-2 victory against Ecuador in a game that saw Ecuador snuff out two Mexico leads. Luis Rodriguez (77′) provided the game-winning goal late after Ecuador snuffed out previous advantages authored by Jonathan Dos Santos (28′) and Luis Montes (62′). Angel Mena (47′) and Ayrton Preciado (66′) contributed the goals in La Tricolor‘s defeat, in what was also their last preparation game before the Copa America.

The first half saw El Tri, once again, try to be protagonists and manufacture chances from the possession. Clear chances on goal, including from shots by Orbelin Pineda and Raul Jimenez, came early and frequently. However, much of the early focal point of Mexico’s attack in the first twenty-five minutes had come from building through wide areas.

However, in the first twenty-five minute period, it became clear that El Tri had a plan to hurt Ecuador’s defense through the middle. And in the game’s twenty-eighth minute, Jonathan Dos Santos dribbled his way between La Tri‘s defensive lines and fired a left-footed shot from outside the area to open the scoring.

Later in the first half, El Tri, with Raul Jimenez as a conduit, had looked to challenge the center of Ecuador’s defense again and found several chances on goal but none could force Ecuador goalkeeper Maximo Banguera to answer to keep his side’s deficit at one at the break.

It was in the second half that the bulk of the scoring in the match began. Two minutes into the second half, however, La Tricolor drew level at 1-1 on an Angel Mena free kick that took a deflection and surprised Guillermo Ochoa.

Fourteen minutes later, Luis Montes responded with a direct free kick goal of his own, finishing an in-swinging delivery beyond the reach of Maximo Banguera. Montes’ goal, his last action of the night, had restored El Tri‘s lead to 2-1 in a half that was much more open than the first.

However El Tri‘s second lead of the match would only last four minutes as Ayrton Preciado’s 66th minute header off a corner kick brought Ecuador back on level terms at 2-2.

With substitutions coming in and out of the match, it would seem as if Mexico and Ecuador were going to finish the match on a 2-2 draw. But in the game’s 77th minute, Luis Rodriguez finished a long diagonal ball beyond Banguera’s near post to restore El Tri‘s lead, this time at 3-2.

It was a lead that El Tri was able to hold onto for the remainder of the match, as Gerardo Martino’s side finished its final Gold Cup preparations by maintaining a 100% record in its 2019 activity and a four-match winning streak.

El Tri will look to translate its form under Gerardo Martino into points in a competitive game for the first time when it takes on Cuba in its Gold Cup opener on Saturday, June 15.

Meanwhile, La Tricolor of Ecuador, who are still searching for their first win of 2019, travel next to Belo Horizonte to begin their Copa America campaign. There, Hernan Dario Gomez’s side will take on Uruguay on Sunday, June 16.

NOTE: Hector Moreno left the match in the first half due to a muscular injury severe enough for Gerardo Martino to confirm to reporters that the Real Sociedad defender had been ruled out of the Gold Cup due to the injury.