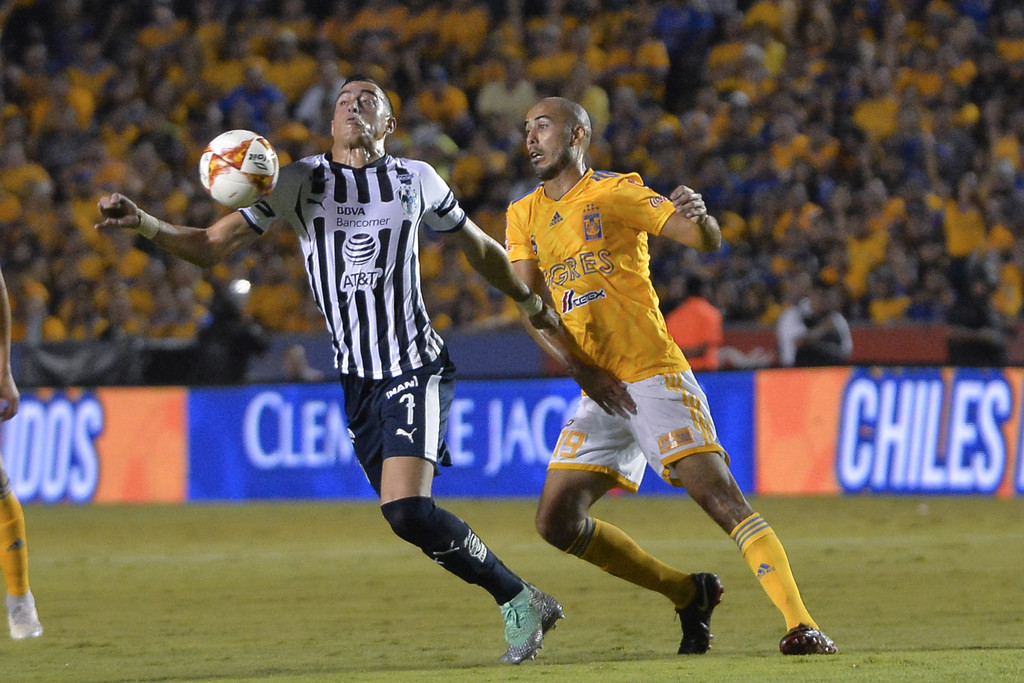 Tigres controlled the vast majority of a Clásico Regio that was unfortunately overshadowed by horrific scenes outside the stadium. Ricardo “Tuca” Ferretti’s side had 69% ball possession and managed to prevent Monterrey from creating anything via their usually dangerous counter attacks.  However, Tigres failed to create much themselves, as they hit the target on just one occasion.

One of the fundamental reasons behind Tigres’ failure to threaten Marcelo Barovero often was the inability to feed André-Pierre Gignac with possession. Gignac received the ball just 16 times against Monterrey, this is less than the number of passes goalkeeper Nahuel Guzmán completed (17).

Most of Tigres’ play was distributing possession around what became a back-five, with Jesús Duenas filling in at left-wing-back and Jorge Torres Nilo on the left-side of three centre-backs. Monterrey’s front two, Dorlan Pabón and Rogelio Funes Mori or Guillermo Madrigal, wisely chose not to press the Tigres back-three, instead they formed a block to prevent penetrative passes into Guido Pizarro. Pizarro managed fewer passes than any of the Tigres back-five on Sunday, which is highly unusual. Pizarro averages the fourth highest number of passes per 90 minutes in Liga MX this season, so Rayados must be credited for stopping service into the Tigres ‘quarterback’.

Antonio “Turco” Mohamed successfully implemented his style of play at Monterrey. Despite Rayados having one of the strongest squads in the division, Mohamed built a defensive side that happily conceded possession and hit opponents with rapid counters via Rogelio Funes Mori, Avilés Hurtado and Dorlan Pabón.

However, a change in style has yet to be seen. Monterrey continue to be one of the least possession-based teams in Liga MX, with only León, Veracruz and Pumas averaging fewer possessions per 90 minutes this season. In fact, Rayados are currently averaging one fewer possession per game than they did under Turco last season.

Alonso’ defensive line-up and stand-off approach out of possession during Sunday’s Clásico Regio was reminiscent of many Turco Mohamed performances, but with Rodolfo Pizarro out of form and Hurtado missing, Monterrey weren’t able to threaten Tigres on the counter. Alonso’s influence is yet to be seen.

Toluca’s three-two victory over Necaxa was the stand-out game from jornada 10. The entertaining encounter, with high-quality attacking from both sides, was turned in Toluca’s favour after half-time, after they twice exploited two v ones on the right-side.

Rubens Sambueza was the creator on both occasions. Sambu displayed excellent understanding of the concept of la pausa (which refers to the timing of the pass), waiting for his teammates to make runs on the outside of his pressing defender before playing them into space.

First, Sambu played in the overlapping run of Rodrigo Salinas, who superbly found the far corner from a tight angle. Then the former América man set-up Alexis Vega, whose chipped finished was turned in by Luis Quinones from close range. It was another outstanding creative performance from Sambueza, and with Vega and Quinones also quick and clever when attacking, Toluca continue to be one of the most dangerous attacking units in Mexico.

Rubens Sambueza draws in his marker, and waits for Rodrigo Salinas’ overlapping run before playing the pass

Djaniny Tavares’ transfer to Al-Ahli in Saudi Arabia was one of the most high profile departures from Liga MX before the start of this season. Djaniny was outstanding in Santos’ title victory, and a big loss to both Los Guerreros and Liga MX. However, Santos haven’t felt his absence much, as they’ve been able to bring Jonathan Rodríguez into a regular, central, starting role.

Rodríguez is one of the highest quality forwards in Liga MX, and being able to regularly start as a central striker, rather than having to play on the left or come off the bench, has led to the Uruguayan thriving. Jonathan is a very different striker to Djaniny, and is much less involved in build-up play. Whilst Djaniny averaged 42 possessions per 90 minutes in 2017/18, Rodríguez has averaged 27 so far this campaign.

“Cabecita” is instead excellent at moving in-behind opposing defensive lines, and getting into shooting opportunities. Only Gignac, Mauro Boselli and Camilo Sanvezzo have managed more shots on target per 100 possessions than Rodríguez this season.

Jonathan showed his off-the-ball qualities during the one-one draw with Veracruz, perfectly timing a run on the blind-side of his marker before tapping home to give Santos the lead. We also saw some of his ability on the ball when superbly turning on the edge of the box before shooting. As key as Djaniny was for Santos, with Rodríguez and Julio Furch up front, Santos have 13 goals and arguably the best front two in Mexico right now.

América created significantly more chances against Puebla, but looked like they were heading to a two-two draw at Estadio Cuauhtémoc when Edson Álvarez was sent off in the 87th minute. Miguel “Piojo” Herrera responded to Edson’s red by sending on centre-back Bruno Valdéz for Renato Ibarra, in order to help ensure that Puebla wouldn’t grab a late victory.

Valdéz ended up influencing the match more significantly than that though. When América won a free-kick deep into stoppage time, Valdéz snuck in around the far-post, and after Guido Rodríguez’s header was saved by Nicolás Vikonis, Valdéz was on hand to poke in the winning goal.

A surprise winner from a player that was sent on from the bench to do the complete opposite job.