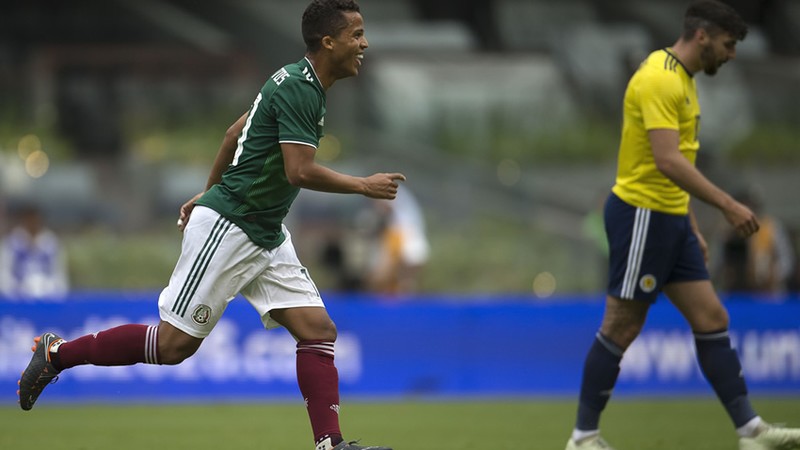 MEXICO CITY, DISTRITO FEDERAL. An early goal by Giovani Dos Santos (13′) was all Mexico needed to defeat Scotland 1-0 at Estadio Azteca in its second World Cup preparation friendly, and the one that would send El Tri off to Russia.

Scotland had the game’s first clear chance of the half in the 10th minute, when Guillermo Ochoa was forced to catch a shot authored by Callum Paterson.

Throughout the first half, El Tri continued to create chances on goal and make their possession effective. The frustration started in the 27th minute, when Miguel Layun’s curling shot from outside the area rang off his far post. Then, seven minutes later, after Carlos Vela won a free kick for El Tri on a shove just outside the area, Miguel Layun delivered a free kick that rose well above the crossbar.

The second half saw El Tri start to play more patiently, and at times allowed the Tartan Army to play with the ball and wait for their chances to break the visitors. Hirving Lozano and Hector Herrera opened the second half shooting gallery with shots from outside the area that failed to challenge McLaughlin in goal.

As El Tri started to shift to a patient mode of play, they also started to see Scotland’s attackers generate chances of their own against Guillermo Ochoa, sometimes off a slow counter, sometimes off a quick counter. In the game’s 68th minute, a missed tackle by Hugo Ayala resulted in a direct attempt onto Guillermo Ochoa’s goal, but the Standard Liege goalkeeper was able to snuff out the chance.

Four minutes later, Oribe Peralta, who came into the match in the 57th minute, thought he had Mexico’s second goal when he delivered a deflected header by Javier Aquino past McLaughlin, but “El Cepillo” was ruled offside on the play.

El Tri and the Tartan Army seemed keen to play without further harm on the others’ goal. But one minute from the end of the 90, Jesus Manuel Corona thought he had gotten Mexico’s second goal of the evening when his chip evaded the hand of Scotland’s goalkeeper. But a Scotland defender was on the line to clear the chipped ball out before it crossed over the line.

In the end, with a 1-0 win, El Tri demonstrated more of their synchronicity in defense and in their buildup play, and displayed more penetration. But the team failed to react or move quick enough to chances they did have. Nor did El Tri necessarily show variety and deception in how they tried to break the inexperienced Scotland. It was a frustration that was encapsulated by a late chant of “Fuera Osorio!” as the match ended.

El Tri will begin their travels tomorrow (Sunday, June 3) to Copenhagen, where they will play their final World Cup tuneup on Saturday, June 9 against Denmark.

Alanis, Molina, and Damm among the casualties as Mexico trims its World Cup list to 24
Futbol Mexicano News Roundup 28 May to 3 June 2018: A Few More Europeos? Xolos’ New TV Home,and More
To Top