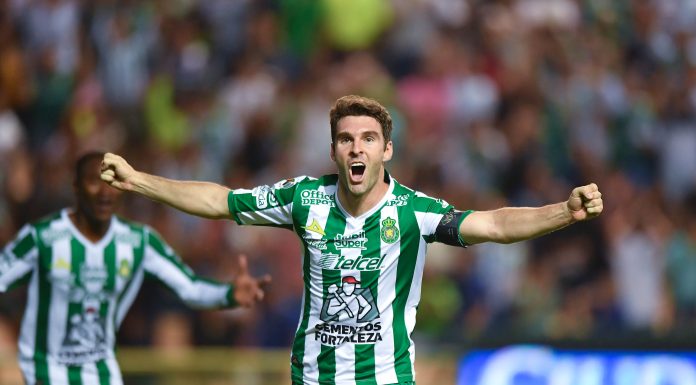 As we reach the end of the season, FutMexNation’s Tom Harrison is overflowing with data from the 2017/18 Liga MX season, and will attempt to use this data to learn more about certain players in Mexico’s top flight. In this piece Tom looks at finishers in Liga MX, specifically, players that have scored ten goals or more in Liga MX across 2017/18.

All raw data is provided by Sofascore.com, with graphics created by Tom Harrison thanks to support from SoccerNurds.

How do they score?

Before looking into their efficiency in front of goal, let’s assess how the best finishers in Liga MX score their goals. The first graph, below, plots goals scored with the right or left foot against headed goals. 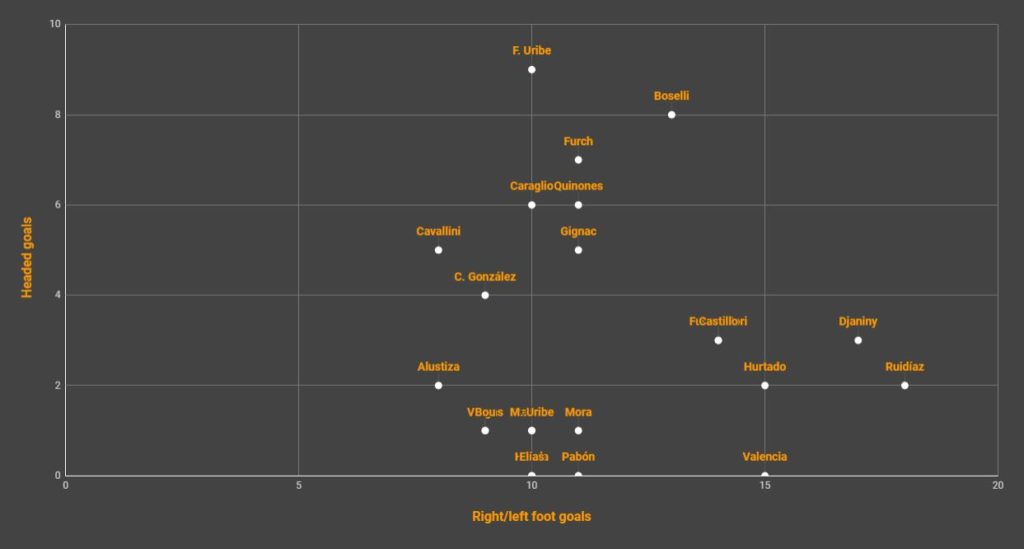 Interestingly, many of the attacking midfielders that scored 10+ goals this season; Elías Hernández, Dorlan Pabón, Keisuke Honda and Mateus Uribe, scored a similar number of goals with their feet as the likes of Fernando Uribe, Julio Furch, Milton Caraglio, Andre-Pierre Gignac and Quinones. The difference between their goal tallies is down to number of headed goals scored. 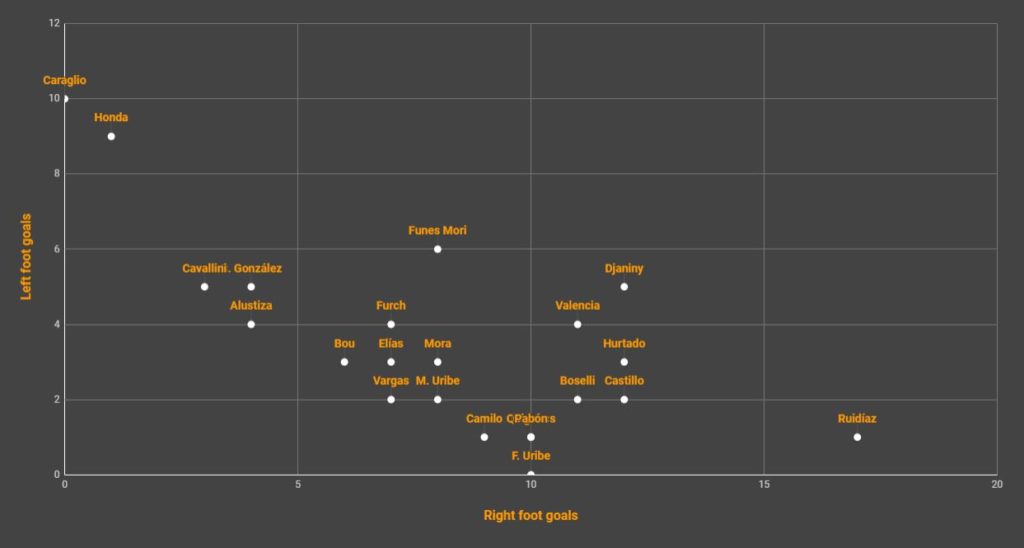 Whilst there isn’t a strong correlation between headed goals and foot goals, when looking at Liga MX’s top scorers, there evidently is between left and right footed goals. Towards the two axis are players that strongly favour one foot, with Caraglio and Fernando Uribe having only scored with one of their two feet. Raúl Ruidíaz sticks out as being limited in how he can score goals. Of his 20 Liga MX goals, 17 came with his right foot.

Only one player on this graph has scored an equal number of goals with his right and left feet, Matías Alustiza, whilst Lucas Cavallini, Carlos González and Rogelio Funes Mori display good balance between left and right footed goals, as well as headed goals. 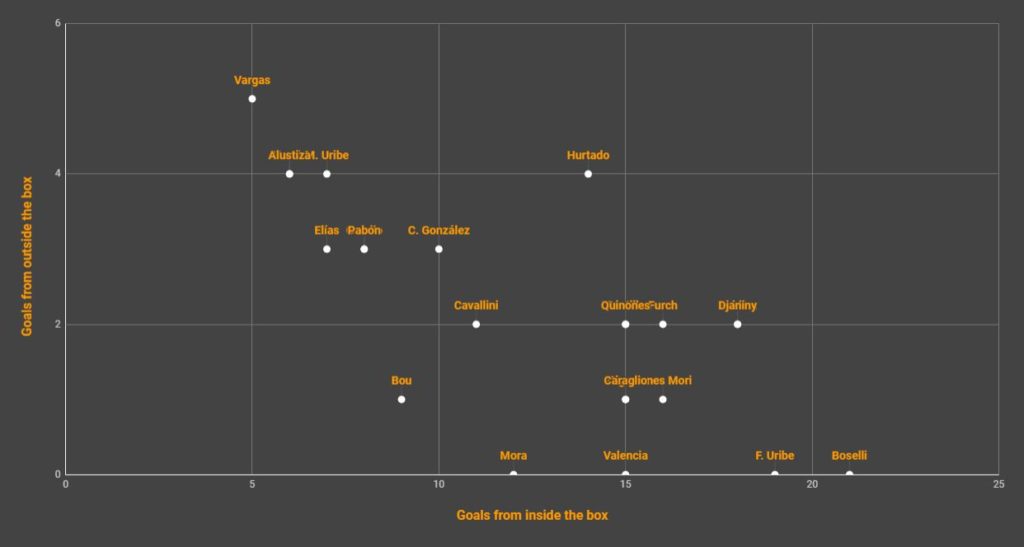 Poachers sit near the bottom of the graph, with eight of the 23 players on the graph having scored one or no goals from outside the box.

How efficient are they?

To score goals, a finisher must have excellent movement and positioning, and has to enjoy quality service from his teammates. But ultimately, a finisher will be judged upon how clinical they are in front of goal. The graph below attempts to assess how clinical, or efficient, Liga MX’s top scorers from 2017/18 were. The graph plots shots attempted per goal scored v “big chances” missed. 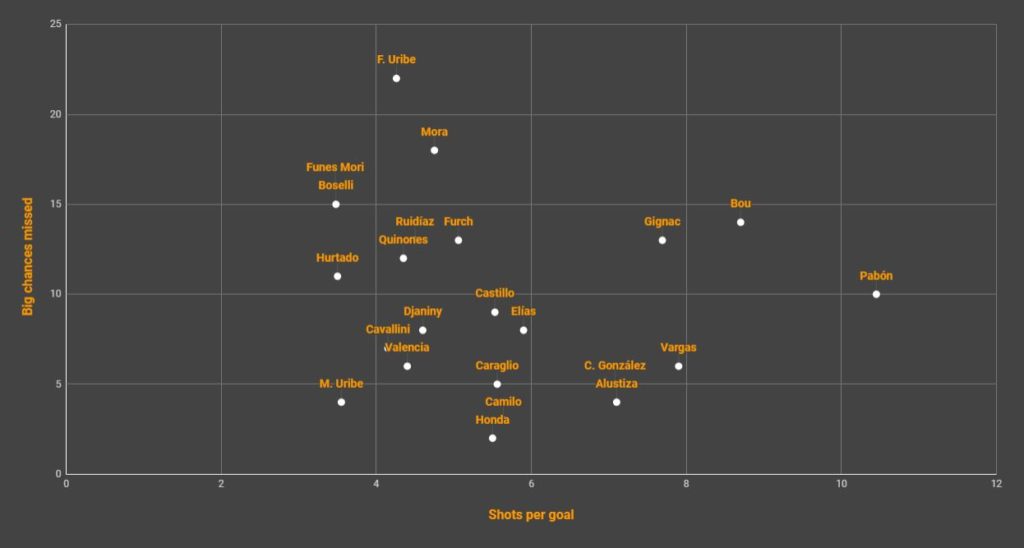 The most efficient finishers are found in the bottom left quadrant of the graph, as these are players that take few shots to find the back of the net, and miss few big chances. Mateus Uribe has made a remarkable impression since joining América, and stands out on this graph for his efficiency. After Uribe, the trio of Cavallini, Djaniny and Enner Valencia sit with single-digit big chances missed and fewer than five shots required per goal scored, highly impressive efficiency.

Dorlan Pabón unsurprisingly requires the highest number of shots per goal for players that feature on the graph. The Colombian has long wasted good possession by attempting too many shots from range. Gustavo Bou, Eduardo Vargas, and André-Pierre Gignac also have poor shots per goal rates. Perhaps this lack of efficiency from Vargas and Gignac has hurt Tigres this season.

Two goal poachers sit at the top of the graph. Fernando Uribe and Felipe Mora have both missed plenty of big chances this campaign, but still have good shots per goal rates, likely due to the fact that most of their shots come from close range. 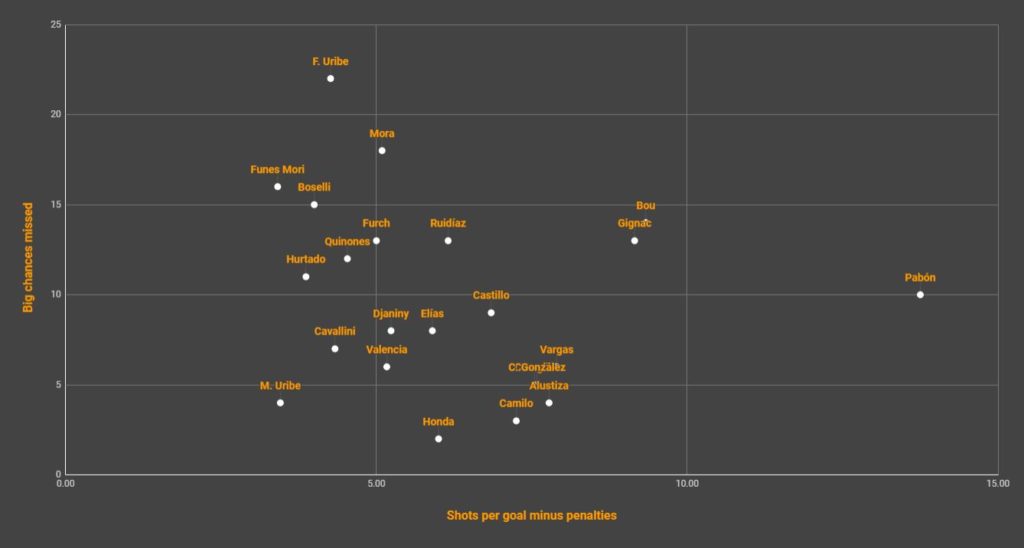 Finally, we take penalties out of the equation and look at shots per goal minus penalty shots and goals. As would be expected, this reduces the shooting efficiency of the majority of players on the graph, with just five of the 23 without a penalty goal across 2017/18. In fact, only Eduardo Vargas and Fernando Uribe didn’t attempt a single penalty across the Apertura and Clausura.

The distribution is similar, but Pabón is left as an even greater outlier. The Monterrey attacker attempted 110 shots that weren’t penalties, scoring eight of them. Comparing this rate to Mateus Uribe is extraordinary. Pabón’s countryman scored 11 times from 38 non-penalty shots, giving Uribe a fantastic rate of one goal per 3.45 non-penalty shots. Only Rogelio Funes Mori betters this.

Two more players stand out from this distribution, Gignac and Gustavo Bou. This may come as a surprise to many, with both considered amongst the best forwards in Liga MX. However, Gignac and Bou are direct with their approach and are perhaps attempting too many ambitious shots on goal. Their shots per goal rates don’t compare well to other top finishers in Mexico.

What have we learnt?

Amongst the top scorers in Liga MX, there’s generally a trade off between scoring from inside or outside the box, and scoring left or right footed goals. However, number of headers scored doesn’t tend to impact right/left footed goals.

Felipe Mora is the ultimate small poacher in Liga MX. All of his goals come from inside the box, and only was headed in. Plus he averages a miserly 19 possessions per 90 minutes, one of the lowest rates in the division. Enner Valencia is another player to score all of his goals inside the box, and actually didn’t score a single header. Compare the Ecuadorian’s big chances missed figure (6), to other players who only scored from inside the box; Boselli (15), Mora (18) and Fernando Uribe (22), and Valencia really stands out.

Other players that impress include; Mateus Uribe, the most defensive player to have scored double figures this campaign, and at an incredible rate, and Funes Mori, who has the best rate of shots per goal minus penalties as well an excellent balance between headed (3), left-footed (6) and right-footed (8) goals.

Pabón sits at the other end of the shots per goal spectrum. The Colombian’s wasteful shooting continues to hurt his performances. Gignac and Bou also have poor shots per goal ratios, whilst it could be argued that Fernando Uribe misses too many big chances, despite the Toluca striker maintaining a strong shot efficiency.

Finally, Lucas Cavallini deserves a mention. Little was known about the Canada international when he joined Puebla from Penarol, but he’s proven to be a highly shrewd addition. Cavallini scored 13 goals for Puebla; five with his head, five with his left foot, and three with his right. All at a rate of one goal for every 4.33 non-penalty shots. Very impressive.