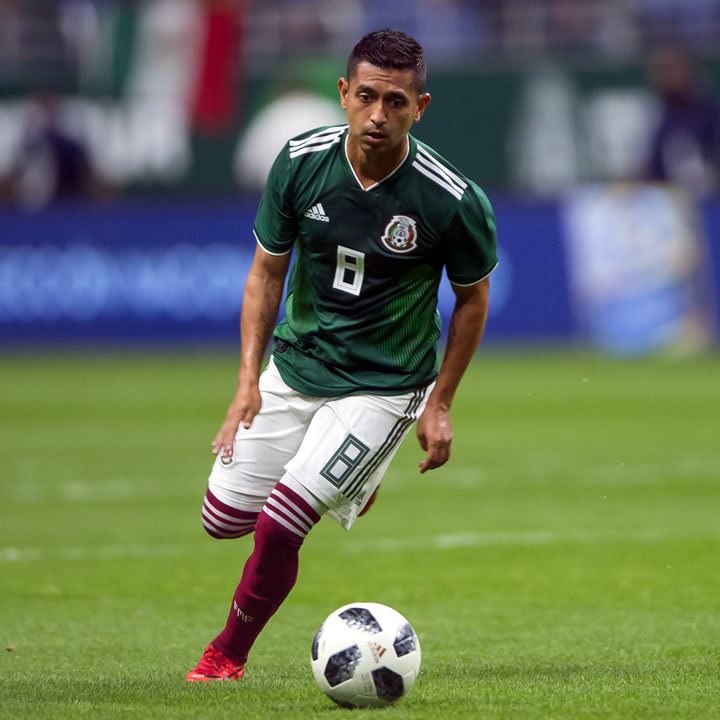 SAN ANTONIO, Texas. A 65th minute header off a corner from Hugo Ayala was all El Tri needed to get past Bosnia and Herzegovina at the Alamodome.

From the opening whistle, El Tri emerged as the protagonists of the match. In the opening minutes, chances were generated on the flanks as Carlos Vela, Henry Martin, and Giovani Dos Santos all had chances to open the scoring which failed when their shots were collected by starting goalkeeper Ibrahim Sehic, while others failed to trouble the Qarabag goalkeeper.

The tactical domination of El Tri early on was present, even though none of the chances resulted in an early goal. When the Dragons tried to build from the back to either side of the pitch, Giovani Dos Santos, Jesus Gallardo, Luis Rodriguez, and Jesus Molina worked to intercept the ball high up the pitch and transform the trap into clear chances.

But by the end of the half, Bosnia had found an answer to at least quell the onrushing pressure–implement a small, low square of four to six players to create numbers disadvantages for Martin, Vela, and Elias Hernandez to prevent the attackers from finding a good shot on goal.

With the first half winding down, the approach seemed to work to result in free kicks, and seemed to give the Dragons confidence to use their own organization to attack El Tri‘s defense. But despite a couple of corner kicks for the Dragons, Rodolfo Cota was left unchallenged as Mexico’s defenders were responsive in emergency situations to take away the ball before the Chivas arquero was forced into action.

At the break, Juan Carlos Osorio instituted four changes, including the entry of Javier Aquino, Nestor Araujo, and Jonathan Dos Santos. However, the changes seemed to help El Tri lose a lot of the initiative in the attacking area. And the Dragons initially seemed like they were going to be able to pass through El Tri and generate a chance off a failed pressure attempt.

But in the 56th minute, with the introduction of former USA youth international Jonathan Gonzalez, the Mexico found more success in intercepting the Bosnia buildup. And four minutes from his introduction, his dribbling, interception, and passing nearly got midfielder Dino Besirevic sent off for a hard tackle near the center of the pitch.

And it seemed to help El Tri in their willingness to break the Dragons, rather than simply string passes together, even though an attempt by Giovani Dos Santos missed the target.

In the game’s sixty-fifth minute, the pressure came good for El Tri as Hugo Ayala finished an out-swinging corner with a header inside the six yard box to provide the game’s only goal. The Tigres central defender recognized what the attacking players realized early on–that Bosnia’s defenders could be dismarked in key positions at key times. Substitute goalkeeper Kenan Piric was also caught flatfooted by Ayala’s sharp-angle header.

However, six minutes later, Bosnia had their best chance of the game–a middle-distance shot from just outside the penalty area. But after the introduction of Rodolfo Pizarro for Henry Martin, El Tri seemed to gain an individual flair on their approaches that frustrated the Bosnian defenders even more. In the 81st minute, he used a dribbling run complete with a couple tricks to enter the Bosnia and Herzegovina penalty area. But the Chivas winger could not find the final shot to finish off the effort.

And in the 83rd minute, El Tri gained a man advantage when Amir Bekic was sent off for a second booked offense–a take down of Carlos Vela on a counterattack.

This opened up El Tri‘s last barrage of the match in the 85th minute, when Carlos Vela, Jonathan Gonzalez, and Javier Aquino all saw shots on frame blocked by the Bosnia defenders.

Despite the lack of goals, El Tri finished off a 1-0 win that showed the team’s capabilities of not getting frustrated with tactical problems thrown at them by a disciplined opponent.

However, with the game not taking place during a FIFA international window, both sides were limited in terms of the players they could use. While Mexico could field a side closer to their first team, with many Liga MX regulars and former Europeos based in Major League Soccer, Bosnia and Herzegovina manager Robert Prosinecky had to field a side mostly filled with players plying their trade in the Bosnian Premier League looking to be considered for the side’s UEFA Nations League campaign.

As for most of the El Tri contingent, they return to league action this weekend, starting on Friday, February 2.