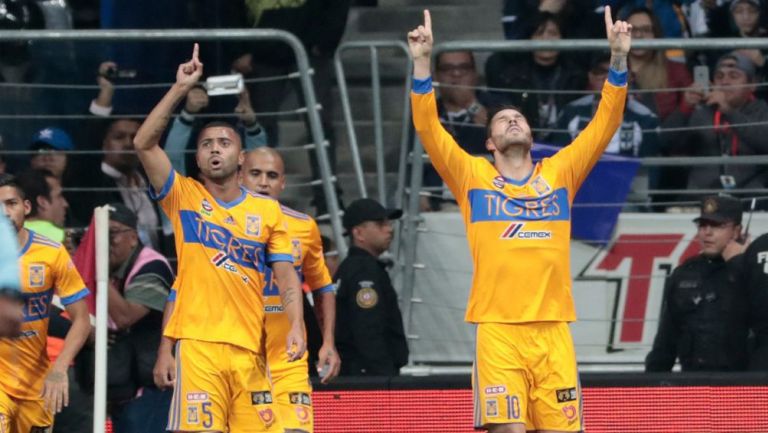 Dorlan Pabon (2′) had opened the scoring early for the hosts, before Eduardo Vargas (30′) brought Los Felines back on level terms.

The final did not so brightly for the eventual champions. Two minutes into the match, Dorlan Pabon connected took a hold of a long ball laid off by Rogelio Funes Mori and opened the scoring for the hosts with a bouncing finished from outside the area.

Soon after the Rayados took the lead, Tigres started to close down the channels for their opponents’ long balls and left their hosts without much of an attacking plan.

Despite the tactical advantage Tigres gained, they did not make a clear chance until the 29th minute, when Eduardo Vargas finished a low shot from outside the area to bring the auriazules level.

Five minutes later, Tigres pulled ahead at 2-1 when, off a short corner, Francisco Meza headed a cross by Hugo Ayala past Hugo Gonzalez.

Tigres continued to pile the pressure on the host La Pandilla, but the best chance after Meza’s goal came on a wayward shot by Andre-Pierre Gignac off a Tigres counterattack.

In the second half, the Rayados looked to gain fluidity and purpose in their attack when they subbed in Pumas-bound Luis Fuentes for temporary central defender Jose Maria Basanta.

The change seemed to help the Rayados find more chances on Nahuel Guzman’s goal. But the chances did not seem to faze Nahuel Guzman, whether they came off a sharp-angle shot by Aviles Hurtado, long distance first time strike by Rogelio Funes Mori, or a shot off a failed clearance by Luis Fuentes.

The 75th minute introduction of Jorge Benitez in place of Jonathan Gonzalez did offer immediate dividends. Soon after his entrance, Benitez drew a penalty off a trip by Andre-Pierre Gignac off a free kick.

Aviles Hurtado attempted to convert the penalty against Guzman, who was moving from goal post to goal post to try to deceive the Colombian striker. But Hurtado fell for the Argentina international’s antics and skied his conversion attempt into the stands.

Without the midfielder who so often broke Tigres’ first wave of pressure, Rayados struggled to find chances late. And in the process of losing their rhythm, they ceded control of the ball to Tigres who were content to keep the Rayados hemmed in their defensive half.

The frustration led to the only booking of the night, a straight red card for Neri Cardozo in the final minute of second half stoppage time.

With their third straight Apertura 2017 title and sixth Liga MX title overall, Tigres UANL have proven to be not only the deepest team in Mexico, but the best collective in the league. The host Rayados will have to wait another tournament to try to earn their first Liga MX title without all-time leading goalscorer Humberto “Chupete” Suazo in the strike corps.

The host Rayados still have a second attempt at an Apertura title on Deeember 21, when they host Pachuca in the Copa MX final.

NOTES: Not everything was all rosy for the title-winners, however. In the 73rd minute, they lost the services of Ecuadorian striker Enner Valencia due to a muscle injury in his leg. Tigres won the title 3-2 on aggregate score. Because there is no away goals rule or “higher seed rule” in the final, only the return leg score is denoted in the match report.