Recently, Fut Mex Nation’s Tom Harrison introduced his revolutionary “Performance 100”, a new way of analysing data in football. Here, using the Performance 100, he takes a look at the average Liga MX player for each position…

Eight different positions have been chosen to be analysed in this article; goalkeepers, centre-backs, full-backs, defensive midfielders, central midfielders, attacking midfielders, wingers and strikers. For each position, a Performance 100 map will be shown, demonstrating what the average player for each position does with every 100 possessions of the ball.

Please note that this is an approximation and there may be very slight errors due to human mistakes when inputting and calculating data. Also be aware that there’s a cross-over between accurate crosses and key passes, as accurate crosses are counted as key passes if they directly lead to a shot. Furthermore, the data will be affected by which position each player has been designated, which can be difficult when players have been used in multiple roles this season. 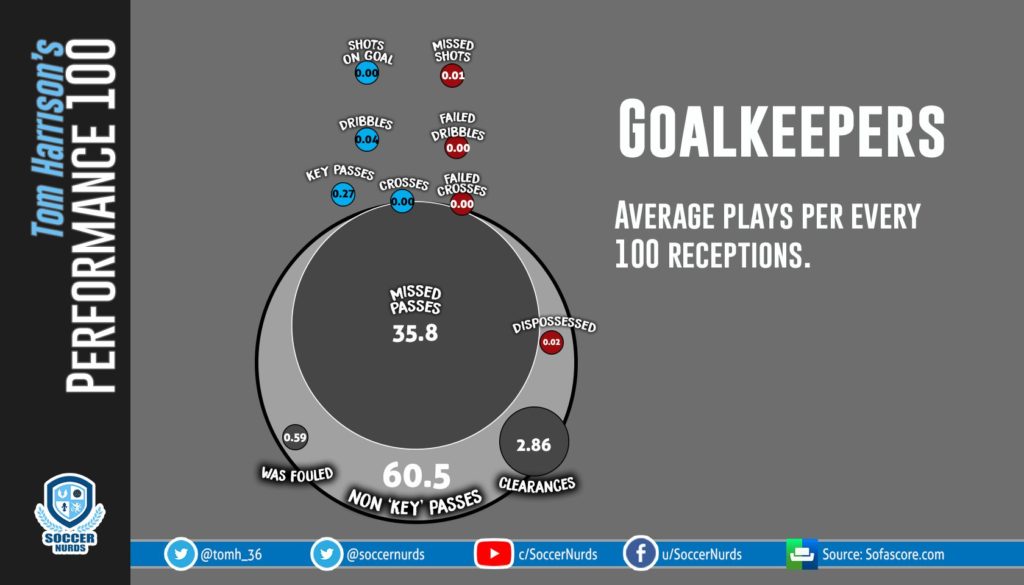 As expected, there isn’t too much variety in what Liga MX goalkeepers do when they have possession. Perhaps the most interesting aspect here is that goalkeepers hit missed passes far more often per possession than any other position. 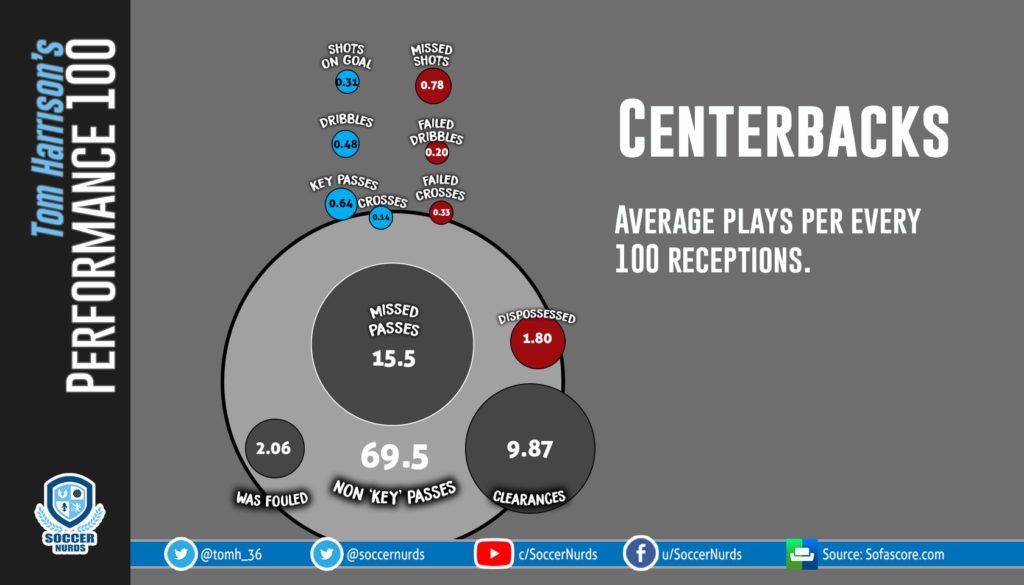 Like goalkeepers, there isn’t massive variety to the plays of Liga MX centre-backs, but one aspect does stand-out, clearances. Almost 10 out of 100 centre-back possessions result in a clearance. Also interesting is the 1.8 dispossessions per 100, which is defined as losing the ball when not attempting a dribble/pass/cross/shot. Considering the position of centre-backs, these dispossessions could potentially lead to dangerous attacks. 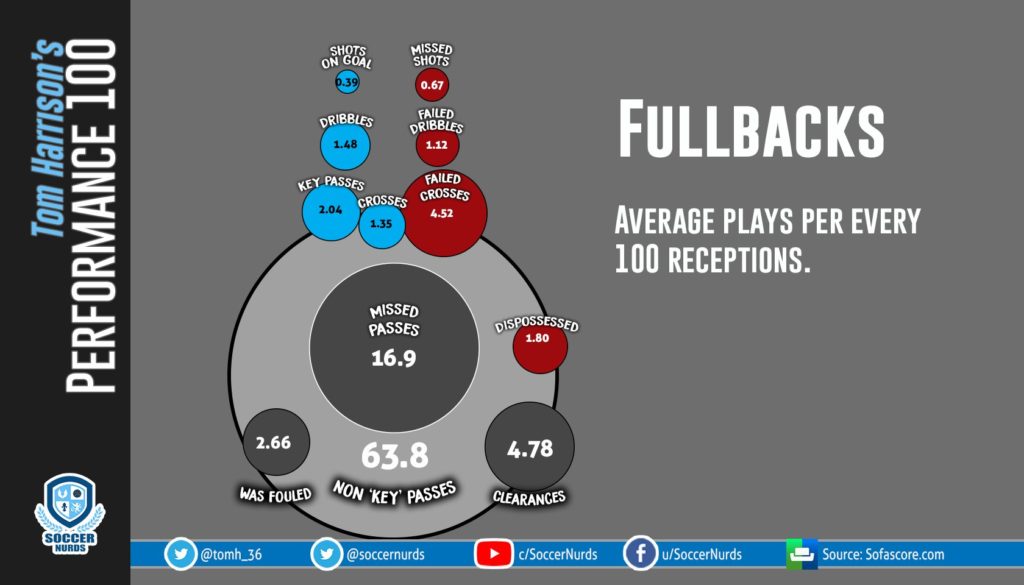 The attacking impact of full-backs is clear when comparing this graph to the centre-back map. Dribbles, key passes and crosses are significant aspects of the role of full-backs in Liga MX. 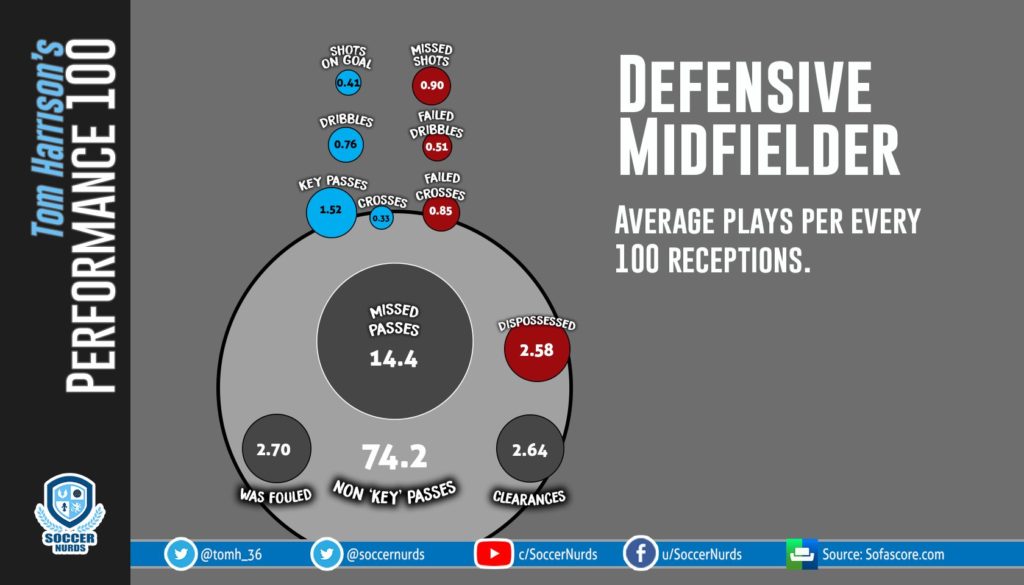 Defensive midfielders in Liga MX have the highest rate of playing non ‘key’ passes. Unsurprisingly, dribbles and crosses are less of a factor in the play of defensive midfielders than of full-backs, however, likely due to their central position, they do attempt more shots. 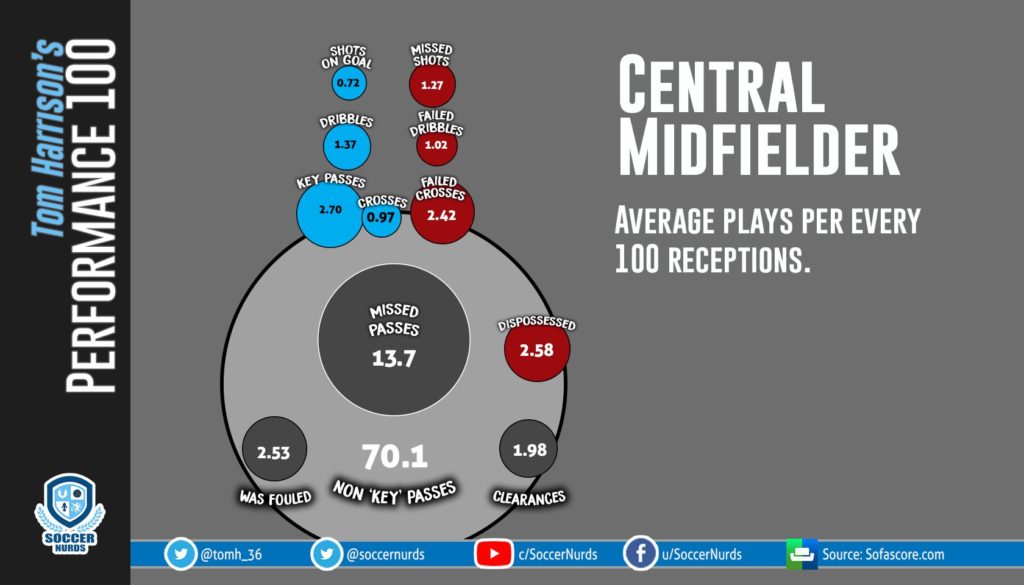 The average Liga MX central midfielder looks rather similar to the average defensive midfielder, which is to be expected considering that many players are used in roles that blur the lines between the two positions. As expected, there are fewer non ‘key’ passes, replaced by shots, dribbles, key passes and crosses. Despite playing key passes more regularly than defensive midfielders, which suggests higher risk passes, the passing accuracy of the average Liga MX centre-mid is slightly above the average for defensive-mids, some what surprising. 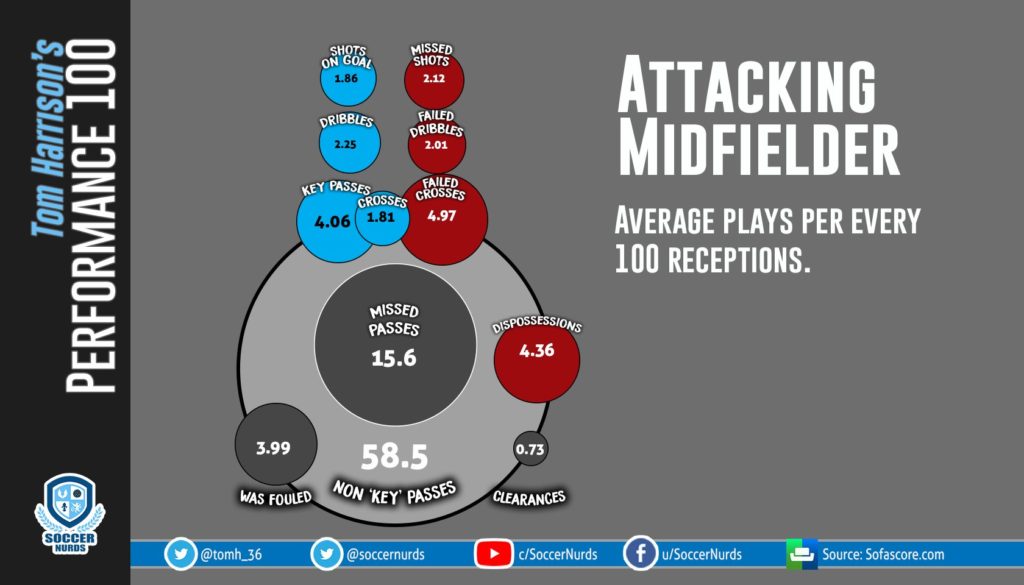 Now we come to the main risk-takers on a football pitch, attacking midfielders, wingers and strikers. Both the blue and red circles are larger than for previous positions, as attacking-mids are creating more, but also giving away possession more frequently. 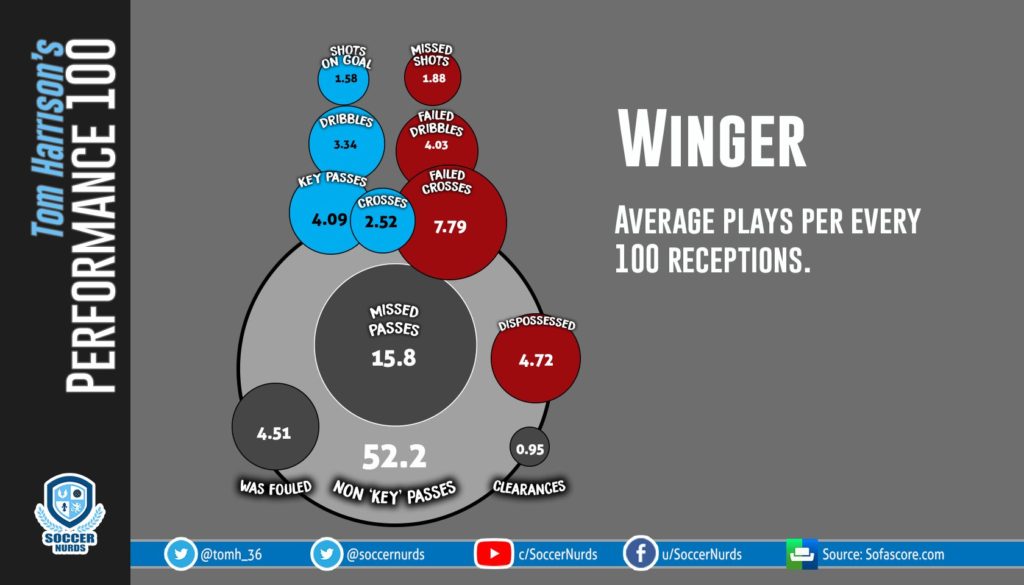 It’s quite surprising to see how much the average Liga MX winger differs from the average attacking midfielder, considering that many players can happily fulfill both positions. Wingers attempt significantly more dribbles, but for the first time, failed dribbles outweigh successful dribbles. The huge red circle for failed crosses stands out most on this map though. An increase from 1.81 crosses to 2.52, when comparing to attacking midfielders, has come at the cost of failed crosses rising from 4.97 to 7.79. 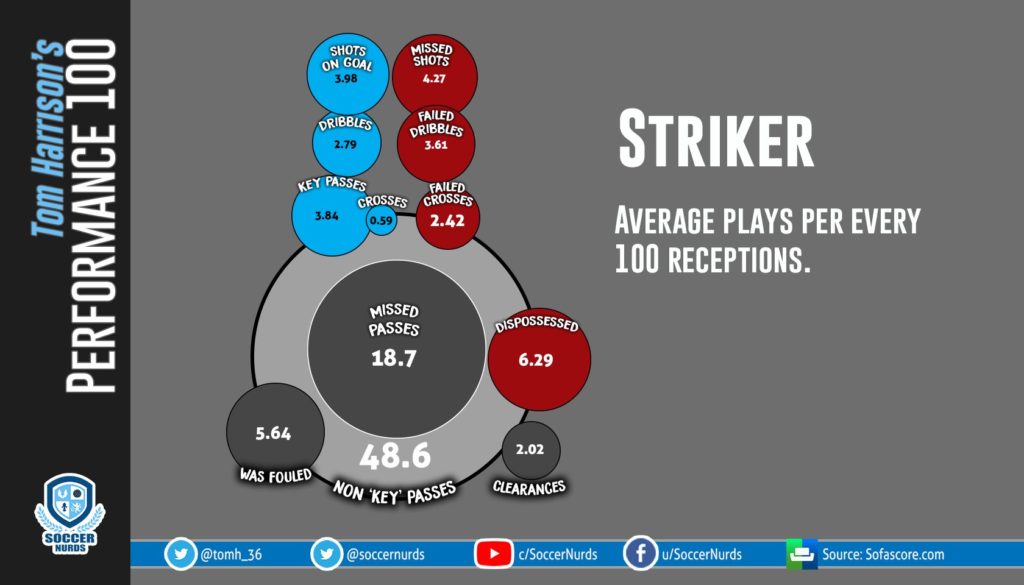 Surrounded by defenders, it’s no surprise to see that strikers are dispossessed on average over six out of 100 possessions. It’s also no surprise to see the shot circles significantly larger than for other positions. This, combined with a large “was fouled” stat and the most missed passes per 100 possessions for outfielders, has led to non ‘key’ passes dropping below 50 for the first time. The most surprising observation is the number of clearances per 100 possessions, greater than for wingers, attacking midfielders and even central midfielders.

The main use of this data is for comparison between players. By putting players against the league average for their position it’s possible to learn more about a player’s specific style and their strengths and weaknesses. It can be extremely difficult to quantify “good” and “bad” in football, particularly as different coaches want different things from their players, but seeing how a player’s Performance 100 numbers compare to the Liga MX average should give a decent impression of the quality of the player’s performance. 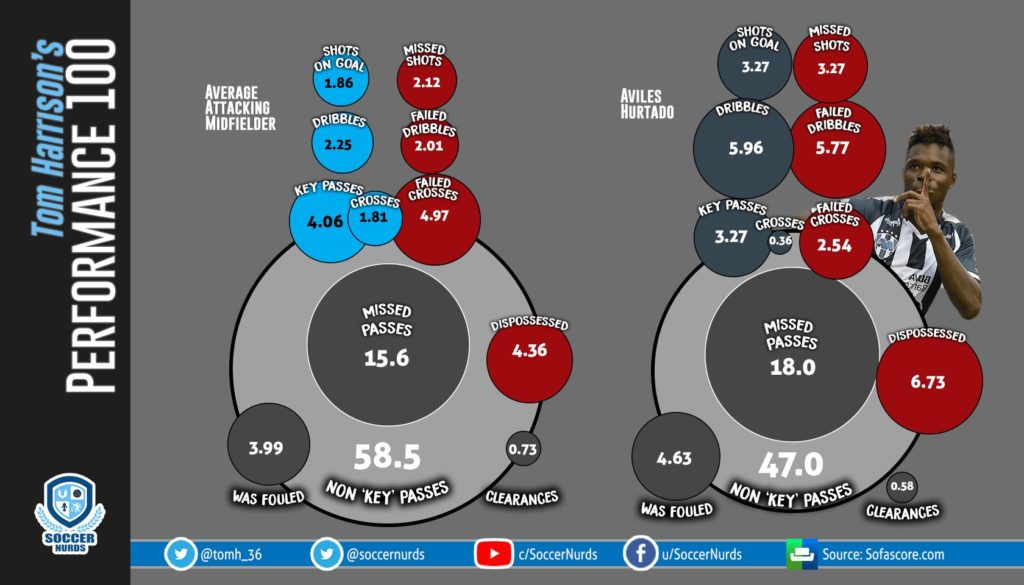 This example shows how the position averages can be used for comparison. Compared to the average attacking midfielder in Liga MX, Avilés Hurtado loses the ball more often via failed dribbles, shots off target, missed passes and dispossessions, but completes significantly more dribbles and gets far more shots on target. The Colombian also plays almost 20% fewer non “key” passes per 100 possessions. Antonio “Turco” Mohamed’s style is all about high-risk taking and directness when going forward, and these stats from Avilés show that he’s a fantastic attacking midfielder for Turco to have.

Keep an eye on @tomh_36 and @soccernurds on twitter for more Performance 100 data in the near future!

Futbol Underground: On Ascenso MX, The return of 20/11, Pay to Play, Corruption, Coaching Changes, and the Fragility of the Europeos’ Club Place.
Where to Watch the Apertura 2017 Playoffs: Liga MX Semifinal and Ascenso MX Final TV & Streaming Guide
To Top