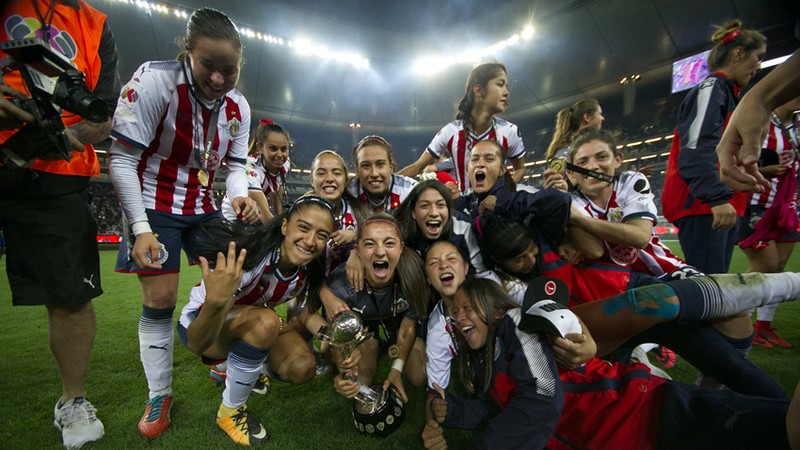 ZAPOPAN, Jalisco, Mexico. With a second half header by Norma Palafox, Chivas became the first-ever Liga MX Femenil champions on the evening of Friday, November 24, defeating Pachuca on aggregate 3-2.

El Rebano overcame a 2-0 deficit from the opening leg of the Apertura 2017 final to defeat the Tuzos 3-0 in the return leg at Estadio Chivas. Arlett Tovar (36′, 55′) authored a headed brace in the victory, while Palafox’s goal, which came in minute 67, sealed the win.

In front of a crowd of more than 32,000 spectators, Chivas came out the protagonists, creating chances on goalkeeper Alex Godinez.

After a convincing win in the opening leg, the Tuzos seemed second-best to recognize and diffuse Chivas chances early on, and were unable to create many of their own.

But the early chances for El Rebano quickly diffused from the run of play, when Pachuca started to recognize the hosts’ quick buildups, or gamble successfully on failed crosses. But increasingly, the hosts had become effective off the set piece.

And in the game’s thirty-sixth minute, Arlett Tovar picked up her first goal directly off an out-swinging corner.

After that point, the visiting Tuzos started to generate most of the chances on goal, breaking into the Chivas penalty area off direct counters. Chivas goalkeeper Blanca Felix was forced into catches under pressure on several Pachuca long-balls that had broken through the Chivas defense, as well as a shot on target off of several Tuzos’ attacks through the middle of the pitch.

But against the run of play in the 55th minute, Arlett Tovar headed in a corner kick to level the aggregate score and double Chivas’s lead on the night.

While Pachuca continued to pile the pressure on Felix’s goal, primarily through the likes of Jaquelin Garcia and Monica Ocampo, Chivas became better at breaking the pressure for chances of their own. And in the game’s 67th minute, Chivas found the final clinching goal off of one of those counters. On a counter which had moved toward the middle of the pitch, a throughball found Norma Palafox in alone on goal. Palafox evaded Godinez’s diving challenge and fired her right-footed shot into the vacant goal.

While both teams had chances later on to make a further difference in the match, nothing was converted on frame as Chivas held on for the aggregate victory.

And with the first title in Liga MX Femenil history, one that was the result of a competition between 16 teams, Chivas found themselves with an emotion that Palafox summarized in an on-field interview.  “I was paralyzed by time, I just wanted to be with my teammates, see my mom, see the fans, I just knew we were up,” Palafox explained.  It was a moment that was not lost on Mexico president Enrique Pena Nieto.

Apertura 2017 Liguilla Where to Watch: Liga MX Quarterfinals, Ascenso MX semifinals, and the Femenil Final
Futbol Underground: On Ascenso MX, The return of 20/11, Pay to Play, Corruption, Coaching Changes, and the Fragility of the Europeos’ Club Place.
To Top