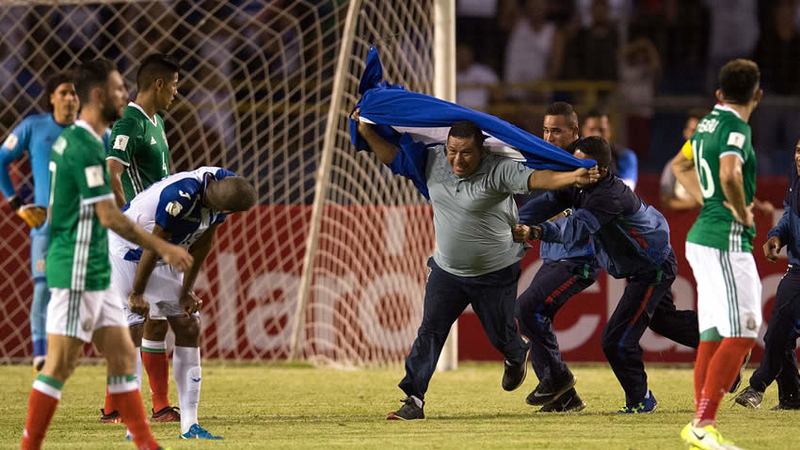 SAN PEDRO SULA, Honduras. El Tri had little to play for, Honduras had everything to play for. The Catrachos utilized a dominant performance to defeat Mexico 3-2 at the Estadio Olimpico Metropolitano, and end El Tri‘s hopes of a first-ever undefeated qualification campaign in the Hexagonal era.

The Catrachos needed a win to have any shot at a World Cup, and early on in the match, the hosts forced Guillermo Ochoa to make several saves. But in the 17th minute, Oribe Peralta opened the scoring with a finish of a low Carlos Vela cross just outside the six yard box.

Then in minute 34, Alberth Elis put Honduras back on level terms when he headed a long ball by Rommel Quioto beyond the reach of Guillermo Ochoa.

Then in the 38th minute, Carlos Vela restored El Tri‘s lead with a left-footed finish off a Hector Herrera-delivered ball over the top of the Honduras defense.

But in the second half, the Catrachos showed their resolve and mounted their comeback, with a malicious style of play. Eight minutes into the second half, a moment of innocence allowed Alberth Elis bring the hosts level with significant help from a Guillermo Ochoa deflection.

And off a long dismarking ball down the left in the 60th minute, Rommel Quioto put the Catrachos ahead for the first time in the match with a finish inside the area off a 2-vs-1 created by the dismarking pass.

And after that point, El Tri failed to mount a significant challenge to the Catrachos‘ lead. And in doing so with the other results in CONCACAF’s final matchday, the Catrachos captured CONCACAF’s  World Cup inter-confederation playoff place.

And with the loss, the undefeated qualification campaign still eludes El Tri, even though enemies of many supporters–Chile, Netherlands, and the United States–will not be at the 2018 World Cup finals.

Next up for the Catrachos (3-4-3, 13 pts), will be their two-legged playoff against Australia starting on November 6. For El Tri, the next match they will play will be a friendly on November 10 in Belgium against the Red Devils senior selection.