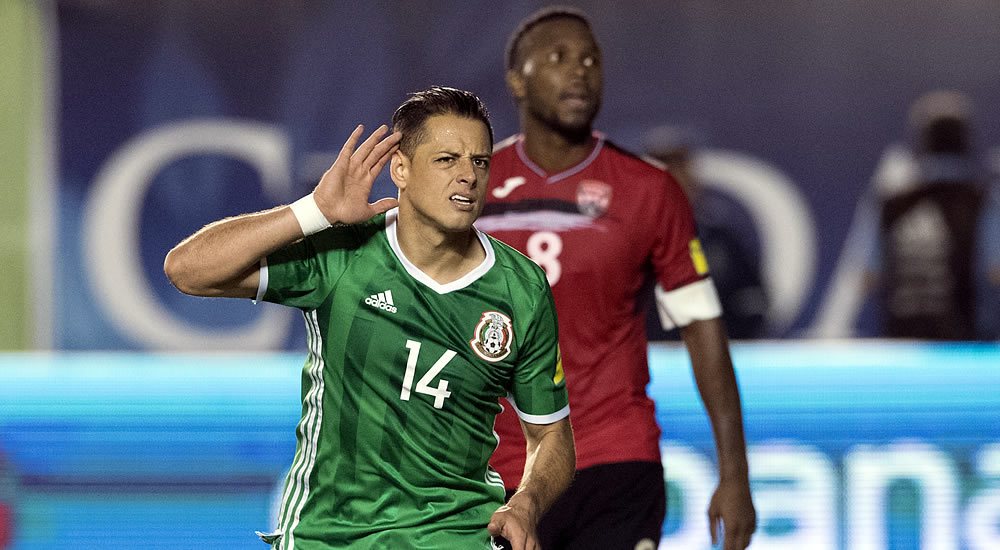 ESTADIO ALFONSO LASTRAS, San Luis Potosi, Mexico. After falling behind early in the second half, Mexico completed a second half comeback in the final 16 minutes of the match to defeat Trinidad & Tobago 3-1.

With the win, El Tri kept alive their hopes of finishing their World Cup qualification campaign undefeated and their chances of securing a place in Pot 2 of the FIFA World Cup.

In the second half, El Tri started to generate chances on Adrian Foncette’s goal with a little more regularity. In a period of three minutes starting in the 52nd minute, Hector Herrera and Jesus Manuel Corona both had shots from inside the area blocked away by Trinidad and Tobago defenders.

But in the game’s 65th minute, Shahdon Winchester shocked the crowd at the Estadio Alfonso Lastra and opened the scoring for the Soca Warriors. Winchester, who plays his club football with Ascenso MX side Murcielagos, latched onto a flicked on header and placed his shot past the surprised Jose de Jesus Corona.

Twelve minutes after Winchester’s warning shot (in minute 77), Hirving Lozano responded with a close-range finish to bring El Tri level at 1-1. ‘Chucky’ Lozano finished off a rebound off a low shot by Javier Hernandez from inside the area.

And in the game’s 88th minute, ‘Chicharito’ put El Tri in front, with another rebound conversion. This time, the rebound was from a shot a Jesus Manuel Corona, which Adrian Foncette played into the path of ‘Tecatito’.

With the lead, El Tri had taken to a more ball-control initiative once more to try to prevent the Soca Warriors from getting a chance. And in the final action of second half stoppage time (90+3′), Hector Herrera converted a free kick past Foncette, to stretch the hosts’ lead to 3-1.

On Tuesday, El Tri and the Soca Warriors will be taking on teams fighting for World Cup places. El Tri travel to San Pedro Sula to face Honduras (2-3-3, 9 pts), while Trinidad & Tobago return to Couva to face the United States (3-3-3, 12 pts). The Catrachos will play their Jornada 9 match against Costa Rica on Saturday.