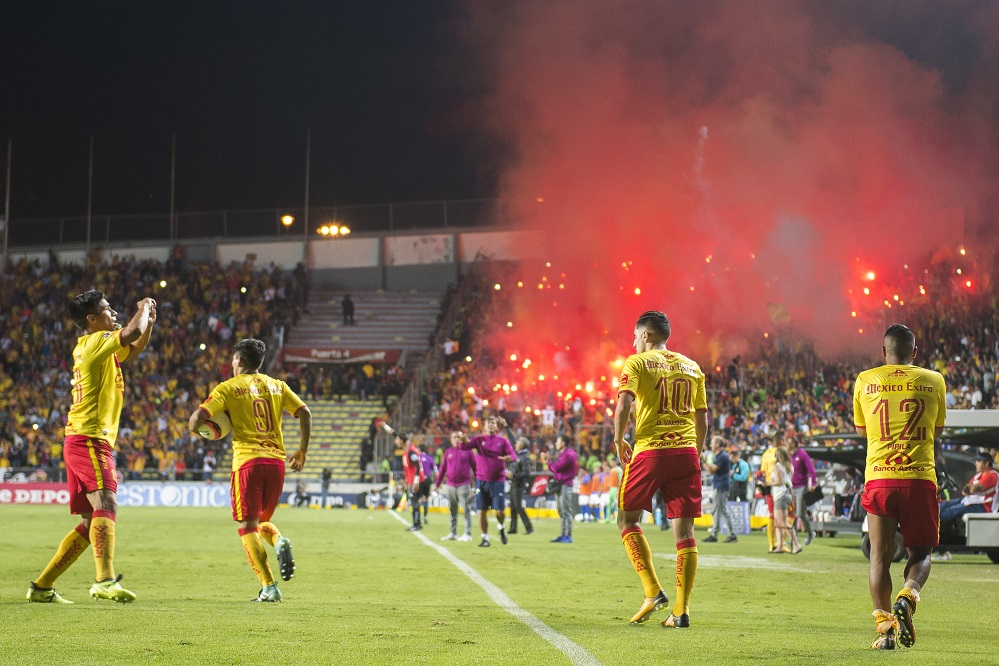 It had been a while since Liga MX had thrown up a great game, but Morelia and Tigres put that right on Friday night.

Morelia took the lead in the 20th minute, Jesús Duenas turning the ball into his own net as Diego Valdés followed-up Raúl Ruidíaz’s missed penalty, but La Monarquía found themselves two-one down at half-time.

Javier Aquino struck a stunning golazo from outside the box, before Enner Valencia finished low at the near-post, after Tigres exploited spaces offered up by the Morelia defence.

The two golazos obviously made the headlines, but Aquino also completed 94% of his passes, 3 of which were key, and made 7 tackles! pic.twitter.com/Ftx84LF24v

As we saw towards the end of last season, this Morelia side don’t give up easily, especially talisman Ruidíaz. He levelled the tie not long after the break, scoring on the rebound after Valdés failed to put away a one-on-one opportunity.

Tigres went three-two up via another fantastic Aquino goal, but again Morelia fought back. Substitute Ángel Sepúlveda scored the equalising goal, tapping-in at the far-post after Jefferson Cuero cleverly headed across the danger zone.

An exciting match, and one that once again displayed the benefits and drawbacks of Tigres fielding three central forward players, plus two wingers. With 18 goals for, Ricardo “Tuca” Ferretti’s side are the joint-top scorers in Liga MX, but they’ve also conceded 11 times in eight matches. They only let in 12 goals in the whole of the previous Clausura. Clearly, the system is still a work in progress, especially considering how much Tuca values the importance of controlling football matches.

Toluca almost threw away three precious points on Sunday, but held on for a three-two victory against Querétaro. The result put Los Diablos Rojos, who’ve only lost once this season, up to third place.

Three goals in five minutes, two of which came from Alexis Canelo, seemed to put the result beyond doubt for Toluca, but they allowed Querétaro back into it.

A poor challenge by Maximiliano Perg gave Jaime Lozano’s side a penalty, which long-time Toluca man Erbín Trejo dispatched. Everaldo, who had come on for the injured Emanuel “Tito” Villa, then cut the deficit in half with a brilliant header.

The momentum had completely swung the way of the away side, and straight after the break Los Gallos Blancos had the chance to equalise through another spot kick. Once again, a miss-timed Perg tackle was the cause of the penalty, somewhat concerning for Toluca coach Hernán Cristante.

Concern for Toluca is the centre-back to partner García

Trejo stepped up once again, but this time Luis García made the save, maintaining Toluca’s lead.

Cristante’s men had a few opportunities to try to finish off Querétaro as they committed more men forward towards the end of the match, but Toluca tried to just see out the game. Instead of looking for penetrating passes on the counter, Toluca opted to retain and re-cycle possession. The tactic worked, and Toluca saw out the remainder of the match to move up to third in the Liga MX table.

Performance of the week- Lobos BUAP

A lot has gone against Lobos this season. They haven’t been able to negotiate a TV deal, they’ve had to ask fans to contribute financially, there’s been a high-profile fight, and, for their latest match, Lobos were missing both Quinones brothers. Key attackers.

Going into the Veracruz match without the Quinones brothers, having lost four of their five previous games, the odds were stacked up against Lobos on Sunday, but they produced a remarkable display.

Lobos completed a league-high (for week nine) 18 key passes and 17 long balls (second highest for week nine), and were successful with 83% of their dribbles.

BUAP had to wait a long while until they found the break-through at Estadio Luis de la Fuente, but Amaury Escoto’s 84th minute goal turned out to be the winner.

A massive match in the relegation battle, Lobos are still favourites for the drop, especially considering their financial situation, but have sent Veracruz into the relegation spot for the time being. A very impressive, and potentially crucial victory.

Liga MX Apertura 2017 TV and Stream Guide: Where to Watch Jornada 9
Where to Watch: Multiple Networks to Simulcast Liga MX Jornada 11 in the United States
To Top