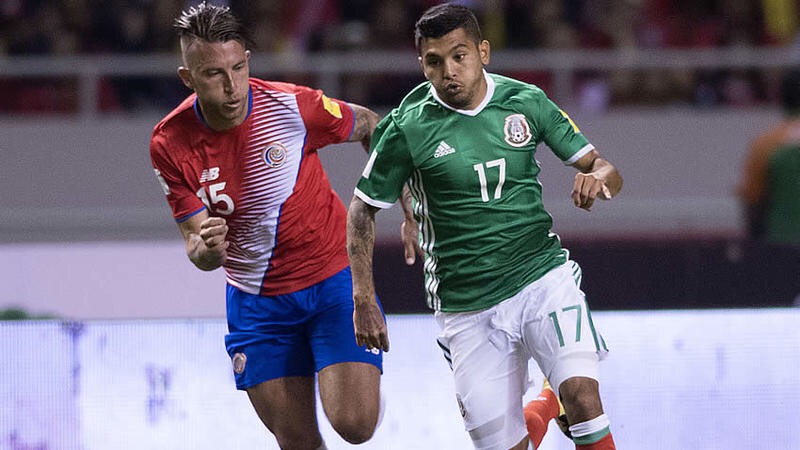 Knowing that a win would cement their place in the 2018 FIFA World Cup, the Ticos opened up the game looking to generate chances from possession. Seeing that Juan Carlos Osorio made significant changes to his lineup because of El Tri had already qualified, Oscar Ramires’s team took a chance that they could attack El Tri with their passing.

But even with a couple early chances, Juan Carlos Osorio knew that ‘Monchillo’ Ramires’s setup had given El Tri an effective tactic to press in the midfield and counter, knowing their ball control and ball-playing ability was vastly superior to what many of the Ticos have demonstrated.

Early on, this philosophy generated good chances for Jesus Gallardo, Giovani Dos Santos, and Raul Jimenez–but each chance had finished with a missed shot or cross. The Ticos had been more effective in the first half earlier on when Guillermo Ochoa was forced to parry away a shot from Bryan Ruiz to prevent El Tri from suffering a first half deficit.

But in the game’s 42nd minute, Raul Jimenez helped find Mexico’s breakthrough off of a short spell of slowed down play on the counter. After a short build down the right, Raul Jimenez played a cross inside the area looking for Giovani Dos Santos, but the cross instead was intercepted and miscontroled by Cristian Gamboa, who played it into his own net to give El Tri the 1-0 advantage.

In the second half, El Tri continues to take a defensive approach to their game, but the Ticos looked to find penetration by playing trying to play breaking passes through the Mexico defenders. Bryan Oviedo, Marco Ureña, and Cristian Bolaños were among the players to find chances early in the second half on goal. But Ochoa and an offside flag averted the early chances.

And when Mexico had the ball, Hirving Lozano, the main point man for their attack, was challenged hard early and often with multiple defenders on ‘Chuky’ when he was played into space. But in the 64th minute, Mexico, through a ‘Chuky’ switch and Jesus Gallardo long ball, were able to work a 3-vs-1 on the counter with Jesus Manuel Corona on the ball in a shooting position. But ‘Tecatito’ fires his shot directly into the arms of Keylor Navas.

But by the game’s 75th minute, the Ticos were able to beat Mexico’s press with their possession to generate sustained pressure on Guillermo Ochoa’s goal. And in the game’s 82nd minute, that pressure turned into Costa Rica’s equalizer, when Marco Ureña volleyed a layoff from Rodney Wallace from outside the penalty area past Guillermo Ochoa.

In the final minute of the match, a ball over the top for Johan Venegas nearly turned into the winner for the hosts, but Venegas’ shot could only find the near post.

In the end, despite the late pressure from the hosts, El Tri (5-3-0, 18 pts) remain on track to finish their World Cup qualification campaign undefeated. But they saw their last significant opportunity to move up in the FIFA rankings to earn a seed in the 2018 World Cup.

Without a winner in San Pedro Sula in the match between Honduras and the United States, El Tri, with Hector Herrera, Jesus Dueñas, Nestor Araujo, Javier Aquino, and others all missing from the national team, prevented the Ticos (4-3-1, 15 pts) from qualifying automatically this round.

Mexico’s final two World Cup qualifiers are against teams currently sitting outside the top 50 in the FIFA rankings. And October 6, El Tri return to Mexico to play their home World Cup qualification finale against a Trinidad and Tobago side who are already eliminated from qualification for the 2018 FIFA World Cup. The same day, the Ticos return to the Estadio Nacional to host Honduras (2-3-3, 9 pts) to try to translate a guaranteed playoff place (which they earned today) into an automatic World Cup ticket.