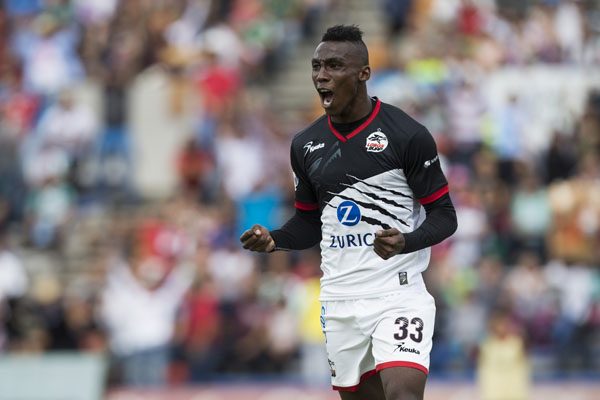 Tom Harrison takes a look at five players that have come from under-the-radar to shine so far this Liga MX season, using statistics to back-up the case for selecting these players. All statistics are taken from Sofascore, and are correct at the time of writing. Note that when referring to ‘per 90 minute’ tables, players must have spent at least 120 minutes on the pitch to qualify for these tables.

Undoubtedly, the most obvious breakout name of season so far. The younger of the Quinones brothers is the top scorer in the league, with five goals in just four matches.

Julián has shown a range of talents in those four matches, appearing to be a quality poacher, who’s strong in the air and can drop into midfield areas to help play-make.

They do focus too much on goals, but still impressive that Julián Quinones has made the @LIGABancomerMX TOTW 3 times out of 5 #ligamxeng pic.twitter.com/jMqfntjtlc

Quinones was dropped for a match following the incident on a night out which led to the sacking of teammate William Palacios, but he returned to great affect with two goals against América.

The 20-year-old Colombian is on loan at Lobos BUAP from Tigres, and considering the promise he’s showing at the Puebla side, Julián could develop into a key player for Tigres in future seasons.

After a career spent on the bench of Liga MX teams, with a couple of short Ascenso MX spells, Alonso Zamora may finally have found his best role, and has nailed down a Liga MX starting spot.

Zamora has been selected by Rafael “Chiquis” García to play in a pivotal role in his creative system. García has been experimenting with a possession-based, three centre-back tactic, with Zamora playing in the middle of the back-three, as the main distributor of the ball.

The 25-year-old has completed the second highest number of passes per 90 minutes this season, at an 88% success rate, and is ranked tenth for centre-backs when adding together blocks, interceptions, tackles and duels won per 90 minutes.

Zamora also has license to push forward on occasion, and he scored Puebla’s stunning winner at Estadio Chivas on Saturday night, with a wonderfully struck volley.

Playing on the left-side of a back-three, Tercero has been extremely active, averaging 23.5 when adding together blocks, interceptions, tackles and duels won per match during games at Querétaro and Pumas. This puts him way ahead of second-placed Guido Rodríguez (15.88) on this table. Eduardo also has the second highest duels won percentage for an outfielder (82.14%), from those two away matches. This percentage is remarkable considering that duels are defined as 50/50 battles over possession.

Lobos BUAP may have conceded nine goals this season, but much of this is due to their adventurous, attacking approach to matches, and these statistics suggest that Eduardo Tercero couldn’t have done much more to prevent goals, at least not in Lobos’ away matches. At just 21 years of age, Tercero is an interesting Mexican prospect.

Stats don't tell the whole story, but I wonder if we will be hearing more about 21-year-old Mexican defender Eduardo Tercero #LigaMXeng pic.twitter.com/NnCTqBAcW2

Making it into the Monterrey starting line-up as a 18-year-old, with their high-quality squad, says a lot.

Deep-lying playmaker Jonathan González has started three of Monterrey’s five matches so far this season, and has fulfilled his duties well.

Not a bad debut for Jonathan González. Did a lot right technically; opening body up when receiving, scanning, accurate passes #ligamxeng

In Antonio “Turco” Mohamed’s direct style, based upon rapid transitions, González is tasked with breaking up opposing attacks and instigating counters with simple passes to more creative players, such as; Carlos Sánchez, Dorlan Pabón and Avilés Hurtado.

The stats show how well González has performed these duties this season. In terms of breaking up attacks, Jonathan is one of 15 players to have made more than five tackles and interceptions per 90 minutes. On the distribution front, the US youth international’s 81% pass efficiency doesn’t sound too impressive for a deep-lying playmaker at first glance, but it’s the highest pass efficiency for Monterrey this season, and if the three times he’s tried, and failed, to play long balls are removed, González’s efficiency increases to 85%.

Bringing in Lichnovsky from Porto was an impressive signing for Necaxa, and so far the Chilean has managed to hit, if not exceed, the level of performance that many fans of Los Rayos expected from him.

The main part of a defence that’s conceded just a goal a game this season, Lichnovsky has made a league-high 18 interceptions, illustrating his ability to read the game and step-up at the right time.

Igor also doesn’t give much away to opponents. He’s won an impressive 66% of his duels, misplaced under 11% of his attempted passes, and has only committed four fouls. A strong candidate for best foreign signing of the season after five matches.

Another fantastic ball-winner this Apertura, Jefferson Murillo joined Veracruz in December 2016, but has only begun to make a significant impression upon Liga MX in the 2017 Apertura.

Murillo, who’s been playing at left-back, could be described as the fourth best ball-winner this season, as he’s ranked fourth in terms of tackles and interceptions per 90 minutes. Jefferson has also won 77% of his duels and, although his main strengths are defensive, he can carry a threat when pushing forward. This was shown when he completed six of six attempted dribbles during Veracruz’s match against Puebla.

A great ball-winning full-back, with physicality and the ability to make driving runs up the wing, Murillo appears a similar player to Necaxa’s Brayan Beckeles, one of Liga MX’s most underrated players.