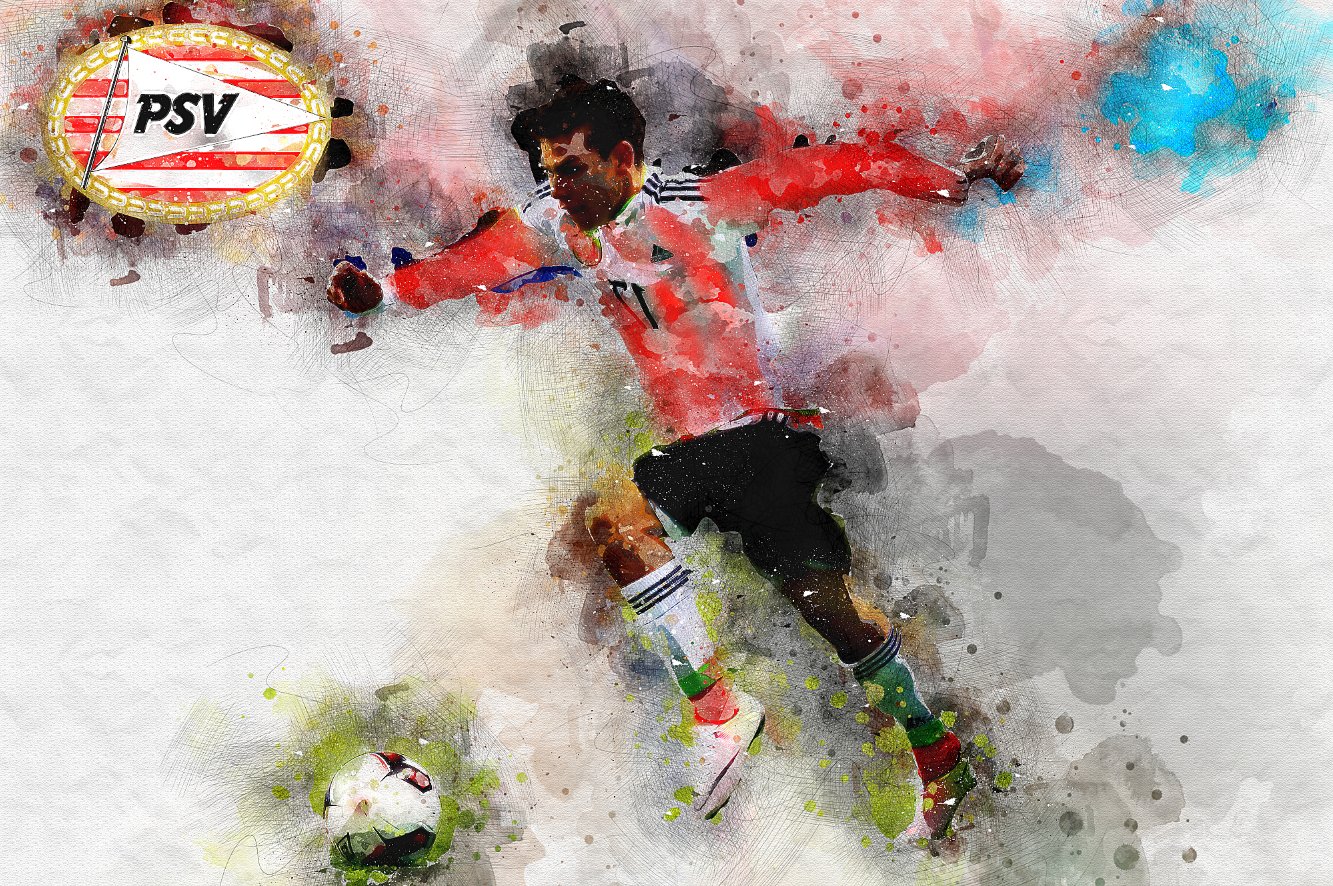 After a long-running transfer saga, Hirving “Chucky” Lozano has eventually made the move from Mexico to Europe. The right-footed, left-sided player will represent PSV in the Dutch Eredivisie next season, a club with a growing fondness for Mexican players.

The question on many people’s lips now is, how will the move work out? This is an extremely difficult question to answer, so in an attempt to produce the best possible response, FutMexNation’s Tom Harrison has received some help. Tom has teamed up with SoccerNurds, who have kindly provided plenty of fascinating pieces of data, and interesting graphics, to assist this article.

Hirving Chucky Lozano has moved to PSV… but will he make it there? Find out here: #Eltrieng #PSV #Chuckyhttps://t.co/3qQdg9SlXt

With 4.62 dribble attempts per 90 minutes during the 2017 Clausura, Chucky is certainly not afraid of taking on defenders. At 50%, Lozano had a respectable success rate last season.

Hirving ranks 12th on successful dribbles per 90 minutes across the Clausura, and third when only considering players that were used for over 1000 minutes.

With 2.31 successful dribbles per game, Chucky made significantly more than the best dribbler for PSV, Luciano Narsingh, who completed 1.6 per match. This suggests that Lozano is an improvement on PSV’s current crop of dribblers, and will add something to their attack.

On the other hand, it could be an indication that PSV prefer to use passing and positioning to break defences down, rather than individual skill.

The hope is that Chucky’s raw dribbling talents will be embraced as adding variety to a PSV attack that, last season, scored 11 and 18 fewer goals than rivals Ajax and Feyenoord respectively. Meanwhile, Lozano can benefit from learning how to play in a system that usually relies on passing and positioning.

Decision making, for example, shooting from range when other options were available, has long been a weakness of Chucky’s, and playing with PSV can greatly help to turn Lozano into a more rounded forward.

Lozano is often regarded as a player that likes to cut in from the left-side, onto his favoured right-foot, and shoot at goal. SoccerNurds data backs this up, with Chucky’s average shooting position during the Clausura just outside the box, inside the ‘d’, slightly to the left of centre.

This is further away from goal than many other Liga MX attacking players. For example; Edson Puch, Avilés Hurtado and Ángel Mena all shoot from inside the box on average. However, Edwin Cardona, a long-range specialist, averages shots from even further out than Chucky. 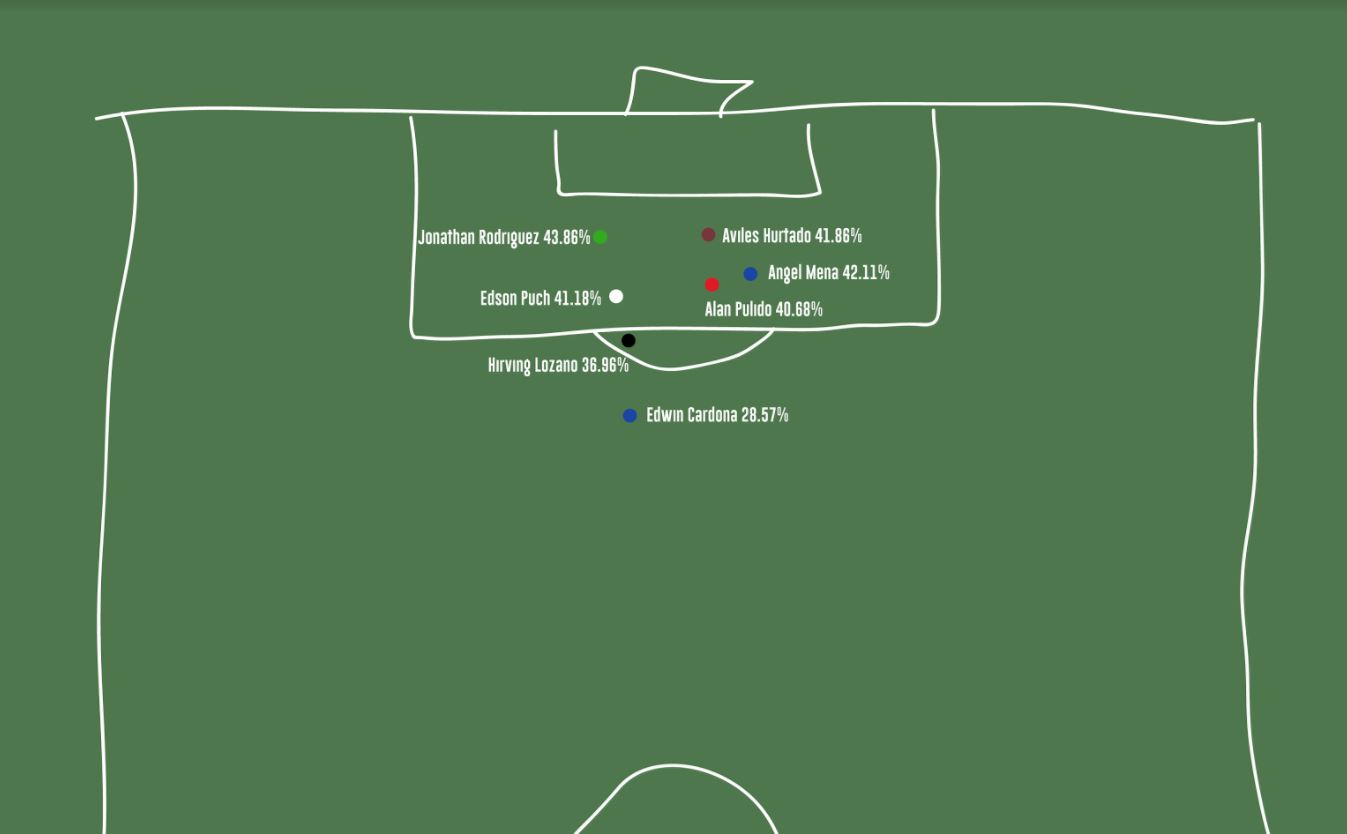 Lozano was rather wasteful of his attempts across the 2016/17 Liga MX season, averaging a goal every seven shots. Puch managed one goal per 3.85 efforts, with Hurtado scoring every 4.96 shots.

Big chances missed, six, weren’t a major issue for Hirving, indicating that it was the large number of long-range efforts that led to his poor efficiency in front of goal. Improved decision making would go a long way to solving this problem.

Another interesting aspect of Lozano’s move to the Netherlands is that he will no longer be playing at altitude. Chucky has moved from one of the most elevated countries in the world to one of the least. Whilst Mexico’s average elevation is 1,111m (3,645 feet), The Netherlands has an average height of just 30m (98 feet).

At higher altitudes, like the 2,393m (7,851 feet) height of Pachuca, the air is thinner, reducing drag on a ball as it flies through the air. Therefore, one of Chucky’s shots taken in Pachuca, or elsewhere at altitude in Mexico, will move faster towards goal than the exact same strike when attempted near sea-level. Generally, the faster a ball moves towards goal, the harder it is to save.

The left-winger has scored just three goals below 1,500m during his Liga MX career, one of which was greatly aided by a deflection. Known for his powerful strikes, Lozano’s right-foot may be less potent away from Mexico’s altitude.

However, he could benefit from the improvements in shot accuracy that may potentially come as a result of reduced shot power.

Silvio Romero is the most efficient #ligamxeng finisher in 2016/17

Lozano’s 75% pass accuracy is a decent number for such a direct, attacking player. In fact, it’s almost identical to the ex-Pachuca man’s replacement, Edson Puch.

However, this percentage may need to improve if Chucky is to nail down a starting spot at PSV. Last season, only one PSV outfielder started more than ten games whilst completing fewer than 79.1% of their passes. This was forward Luuk De Jong, who contributed eight goals and seven assists.

PSV will tolerate a low passing accuracy, by their standards, if Lozano is scoring regularly, but Chucky could find his place under threat if his passing accuracy doesn’t improve, and he isn’t finding the back of the net often.

Creativity is another aspect of Lozano’s game that could be seen as a major weakness by PSV.

Across the 2016/17 Liga MX campaign, Chucky created just two big chances (one per 399 passes, compared to Avilés Hurtado’s one per 108.56 passes or Jonathan Urretaviscaya’s one per 128.05 passes) and is ranked outside the top 50 for key passes per game.

As observed during the recent Mexico/US game, when opponents compact the space that Chucky has to play in, and dribble into, his talents can be negated. Lozano doesn’t possess the creativity or decision making to regularly combined with teammates in order to create opportunities from tight spaces.

Why was Chucky Lozano so poor against the US? My thoughts ⬇️ #ElTriEng pic.twitter.com/XZ5XarU6Dx

Chucky’s dribbles and long-range shots catch the eye, but perhaps the most effective of Lozano’s talents is his off-the-ball movement. Chucky is very good at reading the right moment to make runs in-behind defences, and his pace helps to put distance between himself and opposition defenders.

When Lozano’s runs are met with accurate through balls, plenty of one-on-one situations are created, which are significantly easier to finish than long-range shots.

There are question marks over whether or not Chucky’s off-the-ball movement will be as successful in the Eredivisie though. With PSV favourites in the vast majority of their matches, most teams will be expected to sit back, with a deep-line when they face the Eindhoven side. This reduces the amount of space in-behind defences that Lozano has to run into.

However, Dutch football is known for being attack-minded, so Hirving may not face as many pragmatic tactics as first expected.

Where it all began for Chucky Lozano, a dramatic debut winner at Estadio Azteca. Unforgettable goal.https://t.co/QN59819c3n

The most obvious statistical negative of Hirving Lozano’s game last season is the average distance that he covered per 90 minutes. Chucky averaged just 7.5km travelled per game, one of the lowest figures in Liga MX.

The pressing game, which requires high levels of fitness, is more advanced in major European leagues than in Mexico. Average English Premier League players cover over 10km per 90 minutes, whilst even Lionel Messi, who can get away with not fulfilling defensive duties, travels 8 to 9km per match.

Lozano will need to up his distance travelled per game stats if he’s to contribute to PSV in all phases of the game, which will likely be expected, and avoid developing a reputation as a lazy footballer. This may require an improvement in his fitness levels, however, playing at low altitude, with lower temperatures, may solve this problem.

At the altitude of Pachuca (2,393m/7,851 feet) or Mexico City (2,250m/7,381 feet) effective oxygen is around 25% lower than at sea level. The Netherlands is famously one of the lowest nations in the world, with an average elevation of 30m (98 feet). As more effective oxygen is available, Chucky should be able to cover a larger distance per match without having to improve on his current fitness levels.

Chucky Lozano has been fouled once every 18 minutes and 46 seconds this season #ligamxeng pic.twitter.com/EmqDAgCS50

PSV coach Phillip Cocu usually plays a 4-3-3 system, which is excellent for Lozano. At Pachuca, Hirving became accustomed to playing on the left of a 4-2-3-1 or 4-3-3, and is highly likely to be used in a similar role for PSV.

Cocu does occasionally revert to a 5-3-2 formation though, particularly during European games. This could be an issue for Chucky. He hasn’t displayed that defensive capabilities to play without a left-back to cover, nor has Lozano performed well in a central role, where spaces are often more limited than out wide.

Moving to PSV, in a different country, with a different language, and a different style of football, is a major challenge for Chucky. It may take a while for the 21-year-old to settle into life in the Netherlands, both on and off the pitch.

Off the field, Lozano will be greatly helped by national teammate Andrés Guardado, as long Guardado remains with PSV for another season.

On the field, Chucky has to adapt and round his game. As highlighted in this article, Lozano will likely have to improve his decision making, passing accuracy, creativity and distance travelled if he is to be a big hit at Phillips Stadion. Chucky will also have to adjust to playing at low altitude.

The hope is that Lozano’s move to PSV will prove to be superb for his development. PSV could greatly benefit from the variety that Chucky’s raw, direct style brings, whilst the Mexican can learn to play in a system that often prioritises passing and positioning in order to break down defences.

Unfortunately, I can’t say exactly how Hirving Lozano’s move to PSV will pan out, but I believe it’s a great move. It’s a move that gives Chucky a fantastic opportunity to learn and develop.

Following Chucky’s career so far has been enjoyable, but there’s been plenty of frustrations along the way. In particular, watching Lozano waste good possession by consistently attempting shots from range, rather than looking to combine with teammates, has been exasperating at times.

PSV will demand better, and are unlikely to simply hand Chucky a starting spot due to his large price tag. This, combined with the impact of Chucky being out of his comfort zone, whilst spending time amongst better quality players and backroom staff members, could be superb for the development of Mexico’s wonderkid.