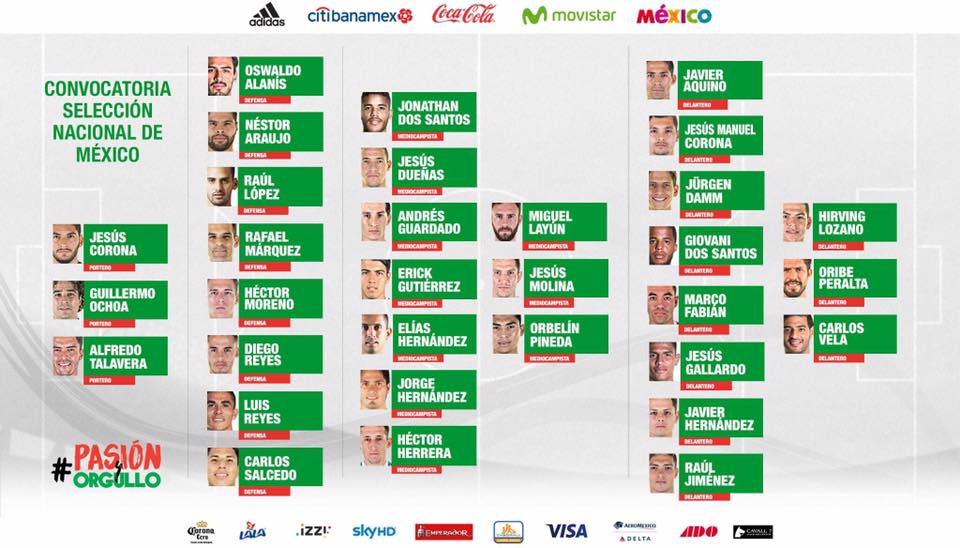 On Tuesday, one part of the puzzle of Juan Carlos Osorio’s selections has been revealed as he called up in 32 players into the Mexico national team side for the World Cup qualifiers and the FIFA Confederations Cup.

The players will convene with the national selection before friendlies in Los Angeles against Croatia on May 27 and Northern Ireland in New York on June 1. After the friendly against Ireland, the list will be cut down to 23 players, who would then travel to Mexico City to face the United States on Friday, June 8 and Honduras on Tuesday, June 11. The nine players who are cut, according to Osorio, would then be considered for Mexico’s Gold Cup squad.

While the list is mostly consistent with Marca Claro‘s reported list, Rafael Marquez (Atlas), and Jorge Hernandez (Pachuca) are two of the significant additions to the World Cup qualifying squad.

Marquez, who had been undergoing rehab for an injury he suffered during the season, had been included even though his arrival time to the national selection may yet to be known. Juan Carlos Osorio explained that he had reconvened with Marquez about his rehabilitation, noting “(Márquez) told us that [his rehabilitation period is] exactly five weeks, and he fulfills them on Thursday. From there and taking into account that he is training with his club, we will come to consider hm to see when he should be on the pitch, and that will be the decision of the medical team of the selection, taking into account that of Atlas and reiterate that if he is in good physical condition, he will be taken into account.”

One player who will not be joining for the friendly will be LA Galaxy forward Giovani Dos Santos. His team still has matches to play during the friendly period and his team has not made him available for Mexico’s friendlies.

Here is the full preliminary World Cup qualifying and FIFA Confederations Cup squad. (Note: If a player is on loan from another club, the parent club will be indicated by a “via”. For players whose loan has ended, they would be considered returned to the parent club if the player is under contract with the parent club, until the player is moved on a full transfer or released.) All Mexican teams associated are current up until the Apertura 2017 player draft, scheduled to take place in Cancun between June 5 and June 8.)

#GioWatch: Gio to Travel With Galaxy Over Upcoming Mexico Friendlies
Where to Watch the Liga MX Clausura 2017 Final and Mexico Friendly Against Croatia
To Top