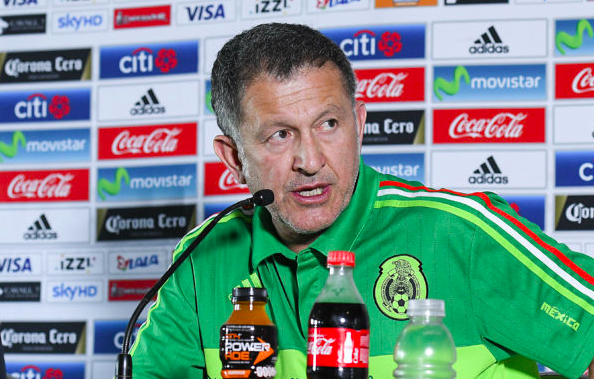 Ahead of Mexico’s World Cup qualifying match against Costa Rica, at home at Azteca stadum, head coach Juan Carlos Osorio asked Tricolor fans for 100% support. This will be Mexico’s first home game of the CONCACAF Hexagonal, after road games against the United States and Panama, and offers the Tricolor a perfect opportunity to take the lead from the first place Ticos. Having finished the team’s preparation in Cuernavaca, Morelos the Colombian took time to weigh in on the factors that  can influence the outcome of the game.

“What is most important is our team and how we will play considering the distinct factors. First, the noticeable absence of five of our very important players and the suspension of Diego Reyes then the [Mexico City] altitude which we are managing by training in Cuernavaca and third the support from the national team fans which is the most important,” said Osorio.

“We understand that we will face a great rival,” continued Osorio. “With the analysis that we have made, the structure that has given them results in the past years, they will not change it, the only thing they can change are the strikers. We believe they have outstanding players with an elite goal keeper but the most important thing is their overall behavior.”

“There are many factors [that makes the Azteca an impregnable fort] but all of the Mexican players have the morale courage to play in Mexico in their own stadium. There are precautions to take because we must respect our rival and control the game before dominating them. We have to play good, convince the fans to support the national team and have a good result so that we can qualify in a healthy and  peaceful fashion,” said Osorio of Mexico’s home-field advantage. However, there is one concern for the Colombian and that is the Tricolor fans habit of turning on the team if the match isn’t to their liking.

“When  I lived in England one of the factors that caught my attention was how in the stadiums the ambiance originates with the fans and here it is the other way around. Our goal keeper will have a good intervention, there is a strike, or a collective play and that lights up the crowd. We expect that [against Costa Rica] it is a combination and that the fans are patient. We we have to transmit that, it is all of our jobs, with the experienced players that we have that the fans can show 100% support. In this group all of the players go all out and give maximum effort because we understand what is at stake,” finalized Osorio.