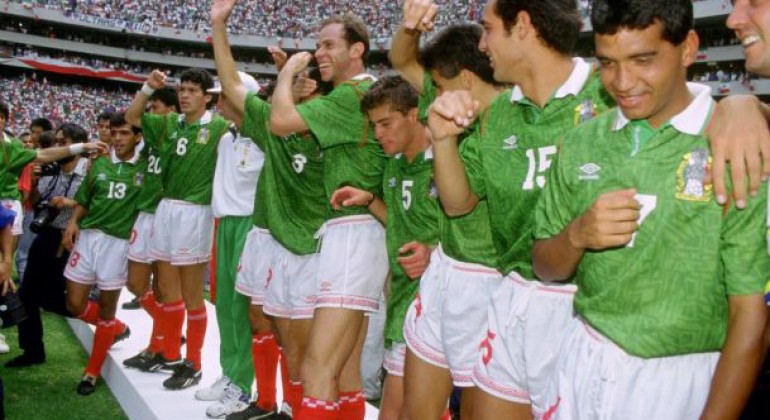 There are not that many people who remember the 1978 World Cup qualifying campaign.  Or the one in 1966.   The ones in 74 and 82 stick out, because Mexico failed to qualify.  Those qualifiers were staged like a mini Gold Cup, played all in one country.  1974, it was Haiti, and in 82 it was Honduras.  Coincidentally, those two nations qualified for the World Cup for the first time after hosting the tournament.

Mexico did not have to qualify in 1986, and were banned from doing so in 1990.  Imagine, then, what it must have been like in 1993.  Mexico playing a qualifier at home for first time since 1981, and a final round qualifier at home for the first time since 1977.  There was a lot of pent up energy in the Azteca.  There were a lot of flags.  A lot of flags.

The capacity back then was over 110, 000.  Mexico dominated at home, crushing El Salvador, Honduras, and Canada.  Mexico breezed to its first ever Gold Cup by scoring goals by the bushel at the Azteca not long after that, including a 4-0 mauling of the US in the final.  The legend was born.  Azteca became the impregnable fortress.  It had the altitude, the smog, the sun, the wall of fans, the wall of flags, the wall of noise. It also had the players.  It was intimidating as hell.

The greatest homefield advantage on the planet.

The Azteca does not exist in a vacuum, though.   Over the years, the advantages were slowly neutralized- the only constant was the altitude.  The smog has lessened, games are now mostly at night, seating capacity has been reduced, ticket prices have gone up, and the flags are sparce.  What about the players?

The players for the most part are the same, save for a teeny weenie little issue: most of them don’t play at altitude anymore.

That wasn’t the case in 1993.  The majority of Mexico’s team was made up players from either CDMX clubs or Guadalajara ones (altitude 5,500 ft).  Playing at altitude was not problem for them.  It was the same in 1997 – the majority of the squad were based again in those two cities.

The cracks in the armor started to show in 2001, when Costa Rica scored twice in the final 10 minutes to claim the first Aztecazo.  Even after that, Vasco Aguirre relied heavily on Cruz Azulinos – Mexico did not lose again.  The 2005 squad was the first where we saw a shift from Mexico City, but to Guadalajara players.  They also benefited from a relatively weak hex and Mexico qualified with no problems. Even the disastrous 2009 start to the Hex, the Azteca held firm, even for Sven, as the dependency on Mexico City based players continued to thin.  In an attempt to tie off the problem, Vasco again leaned heavily on the Mexico City clubs to form his base.  Gerardo Torrado and Israel Castro used their Mexico City lungs to run teams ragged.  He even played the most important game in the middle of the afternoon.  Mexico qualified with 15 home points, and 4 on the road.

Fortress Azteca was supposed to absorb the pressure and allow Chepo de la Torre  and his crew to samba to Brazil without breaking a sweat.  His boys had crushed it at the Gold Cup and had won 12 out of 12 points in the semi-final round.  But the signs of struggles to come were more than apparent. Even in the semifinal round, Mexico was playing poorly at home.  A 3-0 win over Grenada was less than convincing, as was a 1-0 win over Costa Rica. Mexico turned to Torreon in what was essentially a meaningless game.  Was it a coincidence that the base of team not just played outside of Mexico, but played mostly at sea level?

We all know what happened next.  The Hex was an unqualified disaster.  In addition to the players doing their club thing at sea level, they were going through a terrible collective slump.  It was bad.  Giovani was bad, Guardado was god awful, Chich was in the midst of being Moyesed… I don’t want to have to drudge up the past, but it was awful.  0 shots on goal in a home qualifier at the Azteca.  Zero.  Not a sausage.

And this was supposed to be the strongest Mexico team in history.  Certainly the most talented.

Que pasó?  And will it pasar again?  Let’s take a closer look.

Here is the 2013 team that lost to Honduras.

Only 2 Mexico City players. One was the keeper.  9 played at sea level and the lower northern elevations.  The attendance was only 73,000.  It was a Friday night.

The point is, when the players’ clubs were based at elevation, it made a ton of sense to play at elevation.  I am not so sure it does now.  Now let’s look at the starting 11 in Columbus

9 of the starting 10 outfielders are professional players whose club is either at or very close to sea level.  The players have noticed.  They have asked to play some games out of Azteca.  Juan Carlos Osorio has noticed.  He will be treating the Azteca like a road game.

Let that sink in.

They are prepping Cuernavaca.  A very comfortable 2,700 ft below Mexico City, but still 5,000 feet above sea level.  Why not just play in Gudadlajara, which is at a comparabale elevation?  Do you think Chicharito would want to play in Guadalajara?

Then the June qualifiers (and I am not making this up) will afford Mexico the luxury of playing 2 games against quality competition (Ireland, Croatia) before the 2 most important games of the Hex:  Honduras and USA – both in Mexico City.  And to get ready for those games, FMF has scheduled games in LA and NY.  2 sea level games with buttressed by 3 transcontinental flights.

I am not saying ignore the Azteca.  But when it sells out twice in 5 games, it is time to let other cities in on the fun.  Who do you think draws energy from a half empty Azteca?

Guadalajara, Monterrey, Leon, and Torreon are all deserving of hosting a Hex game.  And if we insist on Mexico City, why not CU?  Spain famously avoids Madrid and Barcelona.  Brazil would rather not play in Rio.  If the base of players who are not used to playing at altitude continues to expand, isn’t it time to think about playing elsewhere?