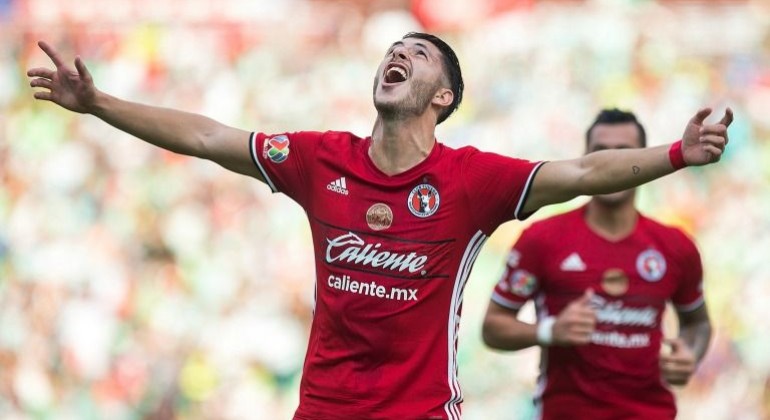 The 2016 Apertura ended with Tigres as victors, following a dramatic finale in Monterrey. FutMexNation writer Tom Harrison selects his team of the 2016 Apertura. See who you agree, and disagree with!

That’s how you go out on a high. Vilar retired after a superb season for Tijuana, in which he was the best keeper in Liga MX. The 39-year-old consistently produced impressive, age-defying stops as Los Xolos conceded a joint league best 13 goals during the regular stage of the Apertura. Liga MX, and Tijuana in particular, will sorely miss the legendary Federico Vilar.

Aris Hernández has been a bit of a surprise performer following his move to Chivas. At first, it looked like he was simply brought in to provide cover to Miguel Ponce, but Edwin has become first-choice, and rightly so.

With a total of 5, Aris finished joint top of the assist chart during the regular Apertura, and provided defensive solidity as well, as Chivas let in just 17 goals.

Defensive solidity was the main factor behind América’s run to the final, and Aguilar was the key part of Ricardo La Volpe’s team keeping their number of goals conceded down.

Including liguilla, no one else in Liga MX recovered the ball more times than Pablito, who averaged over 21 recuperados per game. This illustrates how good the Paraguayan is at reading the game.

A leader on the field, Juninho won his 3rd Liga MX title with Tigres this Apertura. Juninho was a key part of a Tigres defence which conceded just 13 goals during the regular season, and 5 in liguilla. Whilst Gignac’s goals in the play-offs were vital, it could be argued that Tigres’ defence was the main reason that they won the title.

Juninho is also pivotal to dictating the way that Tigres play. No one had more touches or completed more passes than the Brazilian this campaign.

Juninho had much to celebrate this season

The growth of Fernando Navarro in recent seasons has been impressive. Previously León’s main liability at the back, Navarro is now more solid, and offers great threats going forward with his high-energy performances.

Navarro thrived under Javier Torrente, with the Argentine’s pressing game matching well with the right-back’s speed and stamina. Navarro also managed to pick up 2 goals during the Apertura.

For me, the player of the season. Guido Rodríguez had an immense impact on Liga MX after his move from River Plate, recovering possession more times than anyone else during the regular part of the Apertura.

Guido seemed to be everywhere for Tijuana, preventing opposition attacks, before instigating Los Xolos’s own ones. This was all possible thanks to Rodríguez’s outstanding reading of the game, vision of pass and hard work, only 3 players covered more ground than the Argentine this season.

At just 22 years of age, there may even be room for growth in the future. European teams must be taking note.

Toluca won 18 points during the 11 games that Barrientos started. Just 6 were gained from their other 6 matches.

Pitu transformed a very average Toluca side into one which should have finished inside the top-8. They would have had they beaten strugglers Santos Laguna on the final day.

One of the smartest players in Liga MX, Barrientos was highly creative for Los Diablos Rojos, displaying excellent vision, weight and placement of pass, as well as intelligent movement into pockets of space. He also contributed 4 goals. If Toluca are to have a successful centenario, they need Pitu to pick up where he left off.

The Chilean international played from the left-wing in a 4-3-3, but was given the license to roam inside, and pick up dangerous positions. 9 goals, 7 of which were first goals, is an impressive tally, and many of these were golazos. Necaxa must keep hold of Puch to keep their performance level up.

Puch was the star man for a surprise Necaxa side

Getting assists are so dependent on the finishing abilities of your teammates, therefore, looking at pases para remates can be more efficient. Hurtado topped this table, with 37 this Apertura.

Part of Tijuana’s highly-fluid attacking-midfield trio, Avilés picked up where he left off with Chiapas, proving to be one of Liga MX’s most creative players. Blessed with great pace, a high technical level, and, most significantly, a superb footballing brain, Hurtado has been a joy to watch.

In Tijuana’s fluid system, Moreno appeared a right-wing more often than any other position. Considering this, 11 goals, 7 of which were first goals, is extremely good.

The Colombian’s goals, creativity and movement were key to Tijuana’s outstanding season. Perhaps most impressive was how Moreno was able to be an effective threat whether he was playing from the right, left, or through the middle. Many players would have struggled with the regular position switching.

Some may have thought Gignac might struggle to adapt to Mexico. This certainly hasn’t happened.

APG appears to be loving the culture and lifestyle, and has even managed to alter his performances to Mexico’s play-off system.

Sub-par during a 5-goal regular campaign, Gignac came alive during liguilla, scoring 6 in 6 as Tigres lifted the trophy. The Frenchman is becoming a legend in Monterrey, and Liga MX.