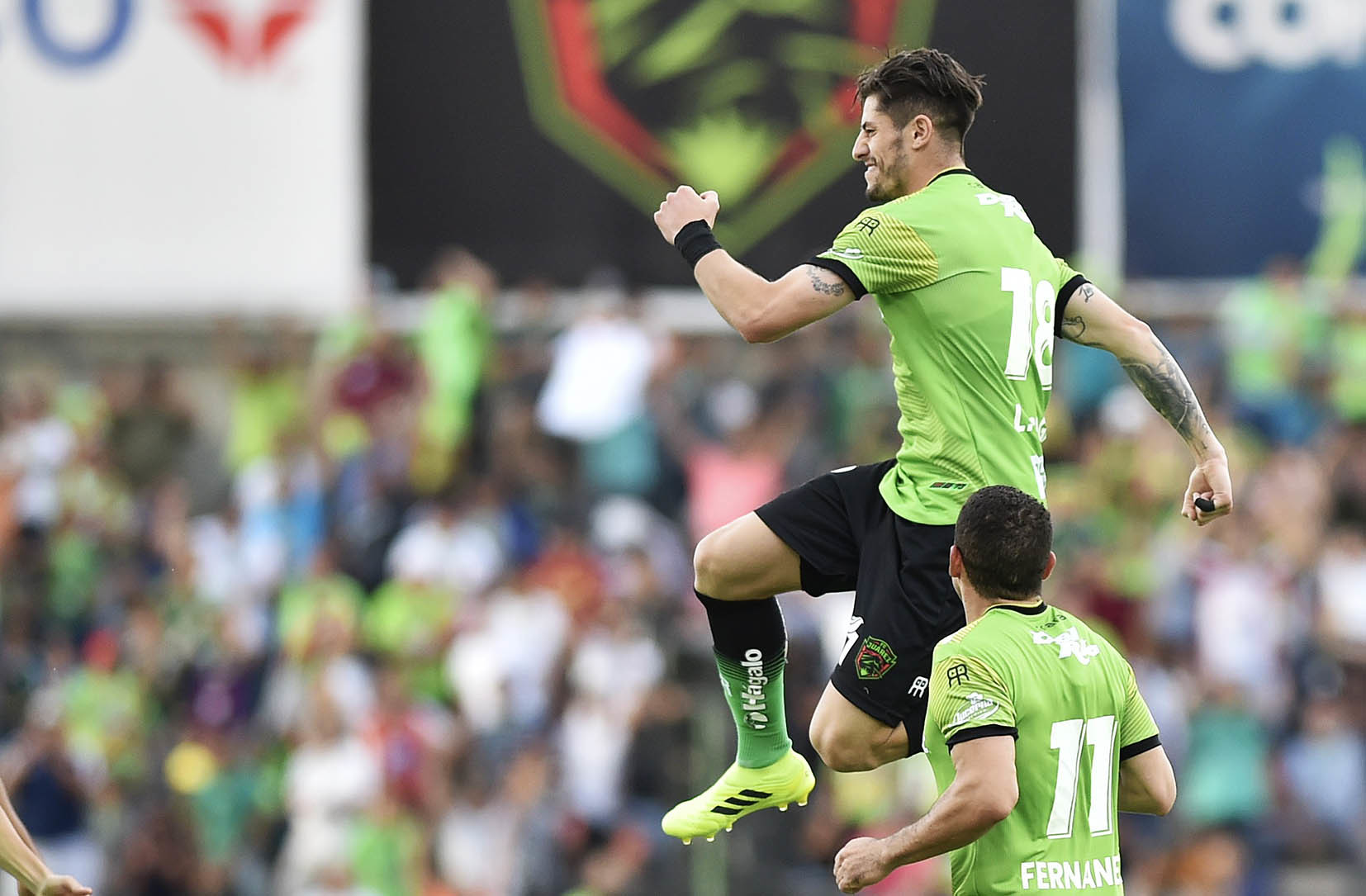 For the first time since Indios were last on the field in 2010, first division soccer returned to Ciudad Juárez on Sunday. On what should have been a joyous day, the region was mourning a white supremacist terror attack a mere six miles away in El Paso, Texas the day before. While no one expects much of Juárez this season, it’s also not out of the realm of possibility that they become sentimental favorites much the same way the New Orleans Saints did in the year following Hurricane Katrina or the Vegas Golden Knights after a terror attack similar to the one in El Paso that took place on the Las Vegas Strip.

Seeing fans in Juárez dressed in lime green and tailgating with burgers and tacos, I hope that a region that has witnessed too much tragedy already will be able to enjoy life again even if it’s only 90 minutes at a time.

Puebla 1, Guadalajara 1: The week’s first game was a controversial one as Puebla and Guadalajara drew 1-1 amid two red cards and three VAR reviews. Chivas had a penalty overturned in the first minute when it was ruled offside, and it would continue from there. In the seventh minute, Puebla’s Alejandro Chumacero took down Javier “Chofis” López in the box and a penalty was awarded. Oswaldo Alanís converted and Chivas were up. In the 43rd minute, Lucas Cavallini deflected a Brayan Beckeles shot past Antonio Rodríguez to knot the game. Cavallini would score another in the 59th minute, but the goal would be overturned and Cavallini shown a red card for stepping on López’ ankle. Chivas’ Miguel Ponce would also be shown a red card in the 72nd minute for getting his hands into the face of Chumacero. A minute later Christian Tabó would get knocked down in the box. He’d receive a yellow for simulation, and that was also reviewed by VAR and while the yellow was waved off no penalty was given and instead a drop ball was done.

Atlas 1, Santos Laguna 2: Both teams entered this week having won both of their games but only Santos would escape with their perfect record in tact. Guillermo Almada’s high pressing style has been effective and entertaining to watch, as Santos seems well-suited to this style of play. Brian Lozano scored his third goal in as many games in the 15th minute when he stole the ball from Diego Barbosa and ripped a shot past goalkeeper Camilo Vargas. Lozano would double the lead in the 85th minute when Atlas simply couldn’t clear the ball out of their own box in time and he was able to finally kick it past the prone defenders. Atlas would be given a penalty in stoppage time after MAtheus Doría was judged to have fouled Christoper Trejo in the penalty area. Osvaldo Martínez would convert but it was too little, too late.

Querétaro 3, Cruz Azul 0: While they might have been a bit of an afterthought going into the season, Querétaro has won two and drawn one in their first three matches after thrashing Cruz Azul 3-0. Luis Romo beat two defenders and hit a shot past Jesús “Chuy” Corona in the 17th minute and capitalized on some more poor defending in the 71st minute while Jair Pereira would get a header past Corona off of a corner kick just two minutes later to seal the win for Los Gallos Blancos. Cruz Azul’s Jonathan “Cabecita” Rodríguez was shown a red card for a bad foul on Jesús Escoboza in the 77th and a minute later VAR would confirm a red card shown to Querétaro’s George Corral for a two footed tackle on Roberto “Piojo” Alvarado.

Club América 3, Tijuana 1: Xolos had a grand opportunity to take advantage of the uncertainty around Club América, with Agustín Marchesín already out and (at the time of the game) Matheus Uribe on his way out but ultimately fell 3-1 at Estadio Azteca. Both teams had good chances to start the game but neither were able to take advantage until the 74th minute when ex-Xolos defensive midfielder Guido Rodríguez hit a rocket from just outside of the area. Xolos would answer in the 81st when Camilo Sanvezzo got to a ball that Ariel Nahuelpán won and shot it past Óscar Jiménez to level the game. Giovani Dos Santos would then take the game into his hands and deliver the win for América. Dos Santos came on just before halftime after Nicolás Castillo collided with Xolos goalkeeper Gibran Lajud and broke his fibula. In the 87th minute, Dos Santos made a move past Xolos’ defense, drew them over to him, and sent it over a wide open Renato Ibarra who tapped it in past a diving Lajud. Dos Santos would get a goal of his own in stoppage when Roger Martínez sent him through and he chipped Lajud.

Pachuca 1, Morelia 2: Monarcas got their first win of the season, downing Pachuca 2-1. Edson Flores put La Monarquia on the board in the 42nd off a great display of team passing. Morelia would double the lead in the 77th minute when Aldo Rocha hit a hopeful shot from distance that took a strange bounce off of the lumpy turf and went over goalkeeper Rodrigo Rey. In the 86th, Jonathan Copete hit a centering pass that deflected off of the foot of defender Gabriel Achilier and past goalkeeper Sebastián Sosa to give Pachuca a lifeline but Monarcas would hang on.

Necaxa 7, Veracruz 0: The worst beating of a Liga MX team since… Pachuca beat Veracruz 9-2 in Week 14 last season, Necaxa scored six in the second half to pummel Veracruz. Maximiliano Salas hit a shot from distance in the 11th and banked in a pass from Caludio Baeza in the 47th. Juan Delgado blew past the defense and hit a tight angle shot past Sebastián Jurado in the 57th. Mauro Quiroga was left unattended at the penalty spot in the 66th when Jesús Angulo passed it to him while Angulo was on his back. Quiroga calmly put the ball into the back of the net for the fourth goal of the evening. Angulo would get one of his own in the 74th when Delgado intercepted a terrible clearance attempt by Jurado and passed it to the wide open Angulo, who deflected it in with his back turned to the net. In the 83rd, José Placencia hit a shot that ricocheted off of the crossbar to Eduardo “Lalo” Herrera, who headed it home into an empty net. Finally, Cristian Calderon would chip Jurado from the top corner of the box in the 85th minute. Necaxa scored another in the 87th minute but it was ruled offside.

Monterrey 3, León 2: León got a two goal lead but a brace from Rogelio Funes Mori helped Rayados pull out the win. León’s Ismael Sosa got the first goal of the game in the 17th minute when he was in the right place at the right time to head a bouncing ball past goalkeeper Marcelo Barovero. Ángel Mena would double the lead in the 42nd minute when he took a pass from a wide-open Sosa and slotted it home. But Monterrey would respond just two minutes later when César Montes headed the ball off of the crossbar and Funes Mori was there to head the ball in. Montes would get a goal of his own in the 66th when he got his head on a free kick and directed it past Rodolfo Cota to tie the game. As the game entered stoppage time, Maximiliano Meza dribbled down the right side of the pitch and hit a fantastic cross in to an unmarked Funes Mori who did not miss from close range. The victory however was tempered when Jonathan Urretaviscaya, who made his first appearance since rupturing the anterior cruciate ligament in his left knee in September 2018, left the game after just five minutes of action.

UNAM Pumas 0, Tigres UANL 1: A historic day as André-Pierre Gignac becomes Tigres’ leading scorer as his 105th goal is the only one scored as Tigres down Pumas in CU. Pumas played a very good game, but couldn’t capitalize on anything. Jeison Angulo was shown his second yellow card in the 71st minute when while jumping for a ball he elbowed Enner Valencia in the head. It looked like Pumas would be able to hold on for the 0-0 draw until Gignac flicked a header past Alfredo Saldívar in the 88th minute to get the win.

Juárez 2, Toluca 0: In the first top-flight game in Ciudad Juárez in almost a decade and a day after a terror attack in their sister city across the Rio Grande River, Juárez delighted the fans with a 2-0 win over Toluca. Mauro Fernández scored the first goal for Los Bravos in the 16th minute when he was able to push on through the Toluca defense and hit a shot that beat Alfredo Talavera. Ángelo Sagal would get the insurance goal in the 49th minute when he hit a screamer from 20 yards out into the top corner.