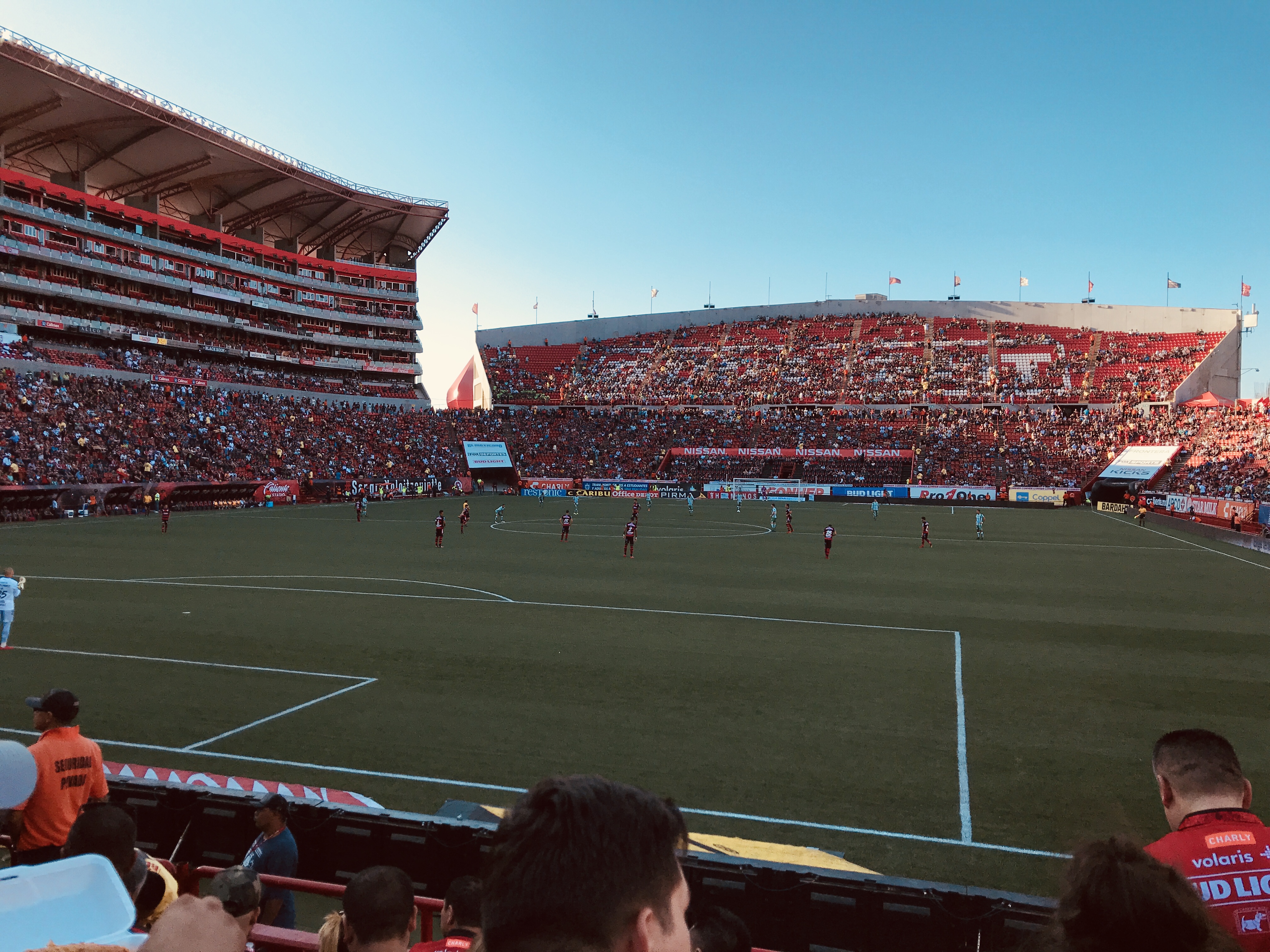 The last time I went to Mexico it was the summer before 7th grade. We were on vacation in Cancun and we arrived just after a hurricane had happened. We stayed in a resort and on one day of our itinerary, went a tour where the guide took us to look at the area that had been affected by the hurricane. I was in the country, but couldn’t relate to what was going on. I existed outside of it.

I started thinking about this as we rode the trolley on our way to San Ysidro to walk across the border. My first time in Mexico in over 10 years and my first Liga MX game ever. I’m pretty sure I went to a molero game that Chivas played at the Coliseum a long time ago but that’s a very vague memory in my mind.

Within minutes of walking past the border check-in and into Tijuana, there was a man along the sidewalk who carried a small bag with the word “Nayarit” sewn into it. The birthplace of my mother and an area I hadn’t visited in more than 15 years. Another gentle reminder that even though I was an extension of the country I was now wondering through, there was very little I actually knew about it.

We arrived near the stadium hours before kick-off so we walked around for a little while to a Comic-Con-like event where vendors displayed figurines and sold merchandise for people to buy. I came across one particular booth that was selling a Pop! Figurine of Miguel from ‘Coco’ with his painted face and red hoodie. Of course I was drawn to Miguel—the protagonist in a film in which he fights to be who he is as a Mexican, is proud of his individual personality but must first mask himself up to realize that (he too also crosses over a bridge or border to enter another world he’s connected to).

I impulsively forced myself to speak Spanish and asked the young lady helping run the booth how much the figurine cost. She looked at me funny and replied in English and after a few seconds of languages and currency rates being lost in translation, I thanked her for her time, left the booth, and thought “how appropriate.”

This city residing in the middle of a forced border that has created both a separation of the same identity and an integration of two different cultures. I sat in a bar awaiting to attend the Xolos match (Liga MX season game) by watching the first half of the LAFC-New York Red Bulls match (a MLS season game) while debating the stereotypical tendencies of ordering a Corona and felt it. That continuous tug and pull of what I thought I was supposed to be, what it is I am and how fortunate I am to be this person.

Game time slowly approached and I was finally attending a Liga MX match. A league I had been a fan of since I was younger because of the knowledge I obtained from my father, an avid soccer lover who grew up in Guanajuato, the state of Club Leon, the team that would be facing the home side of Xolos from Tijuana— the conglomerate area where everything coexists.

I sat relatively close to the Xolos Supporters El Masacr3 behind one of the goals and noticed a sign across from me.

These fans that were standing, cheering, waving their flags in support for their home team could’ve been anyone and born anywhere. They got frustrated when their home team missed the penalty kick, they protested when Luis Chavez got the red card, became angered when Leon scored a goal to get the lead and had their hopes lifted when Xolos tied it up. A universal stray of emotions all soccer fans have experienced during any match really but it was unique here. Or at least it felt like it.

Pushing aside the supposed rivalry between the two teams, the match ending in a draw seemed to align with what I was feeling. Not enough from one side but just enough from the other despite the limitations. And while the lines on the field aren’t necessarily constricting, the man-made borders that give people access can be. It didn’t run away from me how extremely privileged I was to be able to go back and forth between the two countries if I really wanted to. How shockingly easy it was to go through a building and have a “Welcome to Mexico” sign to look at as I walked towards the stadium to enjoy some soccer – the very thing that fuels my connection to the country.

I left fragments at the Frontera after my one-day trip to and from Tijuana. When I made my way back after the match and saw the “United States of America,” I thought about proximity. Had we gone to a match farther down south and really dove into the country, the identity issues would’ve probably been stronger. But no, here we were; in an area that could very well be sin fronteras. But it isn’t. And like me, the border creates a physical reminder that these fragments I and other people that come to visit this region leave behind influence its characteristics and they influence ours. My Uber driver starting a conversation about the similarities between Lebron James and Miguel ‘Piojo’ Herrera solidified that sentiment. We may not always be here, but we were there. Ni de aqui. Ni de alla.

This wasn’t a resort visit where I drove past anything. I got to experience something in the short time I was there. And I’m excited for the next match.