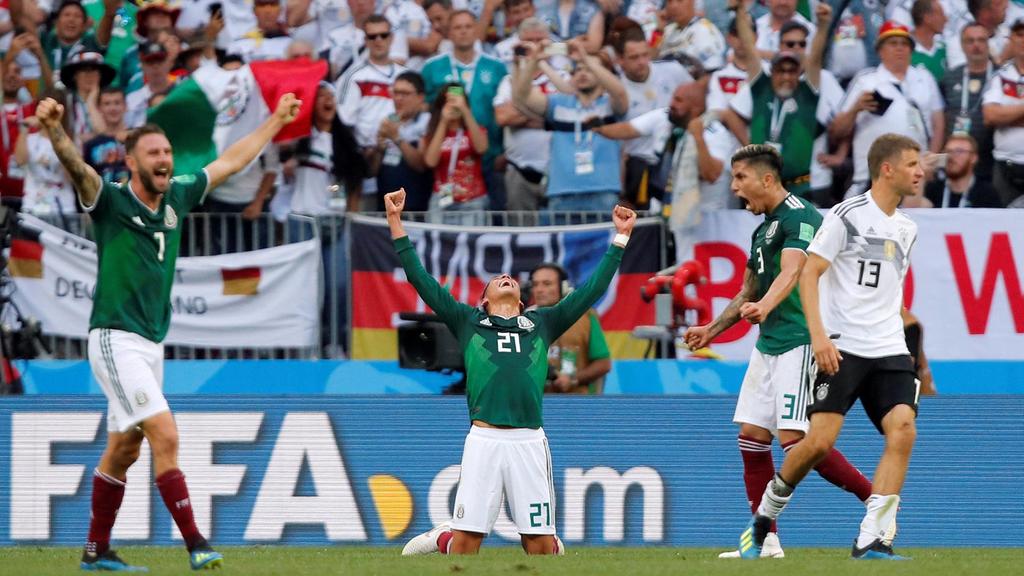 Mexico achieved an outstanding, historic and emotional victory over world champions Germany thanks to Hirving “Chucky” Lozano’s first-half strike. Tom Harrison attempts to make sense of how Mexico did it…

El Tri faced Germany last summer in Russia, during the Confederations Cup, and lost four-one. On that occasion, Germany found plenty of success hitting Mexico on the counter, especially when El Tri defenders pushed up the pitch as they attempted to play out from the back and through the German press.

On Sunday, Mexico turned the tables on Germany, as Juan Carlos Osorio’s side created five counter attacks compared to zero from Germany.

It was a counter attack that created the decisive moment in the match. Mexico quickly played forward after winning the ball in their own half, into Javier Hernández, and Chicharito’s one-two with Andrés Guardado took Mats Hummels out of the game, who made a poor decision to press Hernández. Meanwhile, Chucky Lozano sprinted from mid-way in his own half to support the counter, and when fed from Hernández, showed remarkable composure. Chucky cut inside Mesut Ozil and finished at the near post to send Mexico fans wild.

When @HirvingLozano70 ?? scores the game-winning goal against Germany, the fans give him a new chant. ??#ElTriEng pic.twitter.com/LTFPuhmrXD

El Tri threatened on the break for the majority of the match, and much of that was due to Osorio’s decision to play Carlos Vela in a number ten role, and Germany’s failure to pick him up.

Most of the time, Joachim Low set-up his side in a 4-4-2 when they were out of possession. Timo Werner and Mesut Ozil pressed Mexico’s centre-backs, hoping to force mis-placed passes or even a dispossession, whilst Sami Kherida and Toni Kroos matched up with Andrés Guardado and Héctor Herrera.

Mexico were often able to play through the press, thanks to Guardado dropping deep to get on the ball and distribute, and Herrera’s press-breaking runs. The Porto captain completed a highly impressive six of seven dribble attempts.

When Germany’s midfield duo was bypassed- which was often, Kroos and Khedira were dribbled past five and four times respectively- Vela often had space to run at the German defence and look to pick out through balls. Vela made three key passes during his 58 minutes on the pitch.

Osorio hasn’t often used a 4-2-3-1 formation during his time in charge of El Tri, and the tactical decision to fit a number ten into his side worked extremely well against a German team that lacked a screening defensive midfielder.

Another Osorio ploy which contributed to Mexico’s threat on the counter was his set-up when defending set-pieces. Displaying confidence in his defensive players to deal with Germany’s aerial threat, Osorio left three players up during corners, which often resulted in a German corner being more dangerous for themselves than for Mexico.

One of Germany’s biggest strengths turned into their biggest weakness

Joshua Kimmich is one of the most creative defenders in world football, proven by his assist tally of ten in this season’s Bundesliga. Kimmich is a huge threat when pushing forward from right-back, offering width, a crossing option, and the potential to create overloads.

Osorio, Lozano and Jesús Gallardo ensured that Kimmich was quiet when going forward, and turned his attacking ability into a weakness when exploiting the space vacated by Kimmich’s runs.

Gallardo produced his finest defensive display to date, making a remarkable nine interceptions, but he wouldn’t have been able to achieve that level of performance without the support he received from Lozano. Likely under strict instruction from Osorio, Chucky worked extremely hard to track Kimmich’s runs all match, and the PSV winger ended the game with three tackles and two interceptions. This is significantly greater than his average of 1.57 tackles plus interceptions per 90 minutes during the 2017-18 Eredivisie season.

Often having to track back takes something away from the attacking output of a winger, but not with Lozano on this occasion. Chucky instantly looked to support Mexican counters when they won possession, sprinting down the empty left-hand channel.

It wasn’t just Chucky that looked to exploit the space vacated when Kimmich pushed forwards. Chicharito and Vela often drifted across to the left, as Mexico looked to overload Jérome Boateng, Germany’s right-sided centre-back.

The positioning of Guardado and Herrera in the ‘double-pivot’ of Mexico’s 4-2-3-1 formation was interesting to watch. The pair were very rarely spotted on the same horizontal line, usually at a diagonal to each other instead.

As previously mentioned, Guardado dropped deeper when Mexico had possession, aiming to pick up the ball in-between Germany’s forward and midfield lines. When El Tri were out of possession, Guardado and Herrera switched.

As Guardado and Herrera were rarely on the same horizontal line, it made it difficult for Germany to play through them with a single pass, restricting opportunities for the likes of Ozil, Werner and Thomas Muller to receive possession in space in front of the Mexico defence.

Outstanding displays from Chucky and HH so far.

Lozano has worked so hard to cover Gallardo, and managed to get forward as well to exploit gaps behind the German defence.

Late on, defend the box

Germany threw everything at Mexico late on, following attacking substitutions for Low.

Defending as deep as Mexico did can be dangerous, but Osorio’s changes gave them the best opportunity to prevent Germany from creating good chances.

Edson Álvarez came on and ended the match playing on the right of a very compact back-five, which was seldom dragged apart. Rafa Márquez was also brought in to add experience and defensive quality to the midfield.

The additions of Edson and Rafa, plus Raúl Jiménez, gave Mexico significantly more height in the side, reducing the potential for Germany to grab an equaliser via a set-piece. Low even sent goalkeeper Manuel Neuer up in added time, but Mexico were still able to comfortably defend the corner.

Playing Álvarez at right-back, and shifting Carlos Salcedo across to the centre, flooded the box with Mexican defenders. With Álvarez, Salcedo, Ayala and Moreno, Mexico often had four natural central defenders in their own box towards the latter stages of the match, and German attacks weren’t able to create any big chances from close range.

The 2014 World Cup champions did produce plenty of shots on goal in the second-half, and Mexico fans have Guillermo Ochoa to thank for making an impressive nine saves, but the majority of these saves weren’t particularly spectacular.

The one-nil victory over World Cup holders Germany will live long in the memory of all El Tri fans, and Juan Carlos Osorio and his players deserve huge praise the historic win. Osorio’s radical ideas and tactics have been hit and miss during his time in charge of Mexico, but his approach to the Germany game was a resounding success. As a coach, it was the sort of match you dream of. Osorio’s decisions nullified Germany’s main threats, exploited their weaknesses, and his players, who have consistently showed support for his methods, carried out the tactical approach extremely well. Here’s hoping that was just the start of an unforgettable World Cup for Mexico.