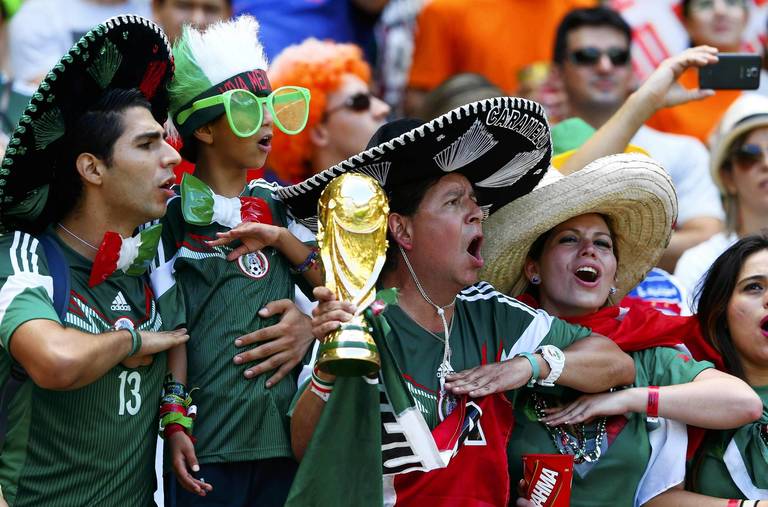 The four year wait is almost over.   What makes the World Cup so special?  I have some answers.

And Cuauh at full stretch in Bordeaux

It’s a Hagi, Stoichkov, and a Rivelino free kick.

And because Rossi’s got a hat trick

It’s Bergkamp stopping a 60 yarder on a dime

And lamenting that Best, Giggs, and Weah

never got their chance to shine.

It made Cubillas and Schilacci household names

It’s Oliseh’s strike from out of nowhere

We wish we could have seen Garrincha, the little bird, fly

it’s made grown men like Gazza and James Cry

It’s Der Kaiser playing with one arm at the Azteca

And David Narey giving Scotland hope… before Zico and Company took it away.

It’s Bebeto rocking the Baby at the Cotton Bowl

Who remembers that Kuwaiti pitch invasion?

It’s a Saudi dancing through Belgians at RFK

Burruchaga leaving Germans in his wake

And Chicharito not knowing with whom to celebrate

It’s because Milla’s the only swinger in town

But as great as it is to see everyone watch across town, it hurts like hell when your side finally goes down

That third goal at Wembley is debated to this day

Man, I wish Brasil’82 could have gone all the way

But even their best wasn’t good enough

Fritz and company stunning the Hungarians in Bern

And because for 6 unforgettable minutes, Haiti led the Azurri

And we know in our hearts NO ERA PENAL