You have questions and for some odd reason I’m the one with the answers! Let’s see what we have for this week’s #AskCesar.

What can we expect from Carlos Vela at LAFC?

20% — Dominates the league, takes charge at LAFC and helps the team win an immediate title.
20% — Follows in the footsteps of Gio and ultimately ends up being an overrated superstar.
60% — Becomes a clear leader at LAFC and thrives under Bradley, but ultimately fails to reach the unrealistic expectations that many will put on him.

I’m one of those people that keeps reading good reviews and wants to watch it, but I’m also not a big enough Star Wars fan to find the motivation to actually go watch it. Am I missing out?

Half of our team is going to be out of town! We gotta find a time to schedule a match soon though. We gotta stream it online and let the people watch the most anticipated FIFA game of all time.

Is this something you are considering for yourself? If so, I’m not qualified enough to be giving a serious answer here. It all depends on the program and your level of play so I would highly recommend talking with those involved with both. I’m sure either the college or the academies will be more than happy to give you some informed answers that you should listen to.

One more time for those in the back, Should MLS continue the expansion of teams in the league or Pro/Rel?

Why not both? Pro/rel is obviously something that many want, but it’s feasible to have both come into play. If I had to have one over the other? Of course it’s going to be pro/rel at this moment.

Is Iceland a good preparation match for the Sweden game?

I’m happy with the match, just waiting on the FMF to confirm that it will be on March 23rd and that the rumored friendly against Croatia will be on the 27th. Both decent opposition when considering Mexico’s World Cup group.

What's more likely to happen next summer, Mexico makes it out of their group or Chucky moves to a top club? Or both? #ElTriEng

Mexico making it out of the group stage is more likely, but that’s also recognizing that Lozano leaving PSV isn’t unrealistic either. I say that both happen.

What’s a good book you would recommend? Sports and non sports related

Here are the first two that came to mind.

Non-sports book — Everything is Illuminated by Jonathan Safran Foer
Sports book — This Love Is Not For Cowards: Salvation and Soccer in Ciudad Juarez by Robert Andrew Powell

If you were able to bring back any Mexican player from any era to play with the Mexico NT in the World Cup, who would it be ?

I still believe that Mexico is missing a player with the spirit, drive and tenacity of Cuauhtemoc Blanco. I love Hector Herrera and his resurgence, but it would be incredible to have Blanco playing in his current position with El Tri.

So much can change during the next several months, but if Mexico was playing Germany tomorrow, this is what I would want the XI to look like in a 4-2-3-1. 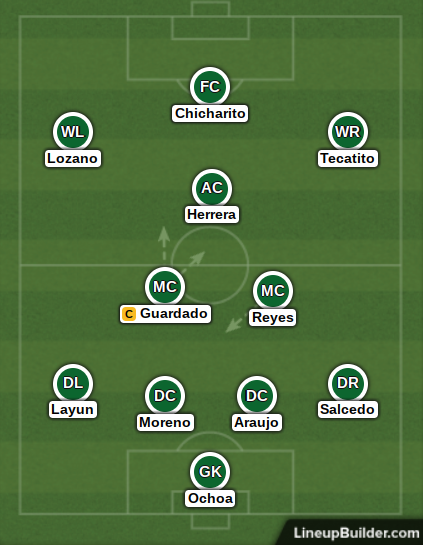 Look into the future of Vela at LAFC, how does he cope?

I think Bob Bradley will keep him in line, but I don’t think he will be the player that everyone is hoping for. Will he be LAFC’s best player and a key figure in a push for the playoffs? Probably and I wouldn’t be surprised if it happens. Will he be as dominant as a Villa or Giovinco? I hope so, and he has the talents to be at that level, but I honestly doubt it.

What is Chivas’ #1 weakness?

Biggest weakness? They need another out-and-out striker. Let’s see if Ronaldo Cisneros can at least be an efficient backup option to Alan Pulido.

What are the real reasons Xolos fired Coudet?

All signs point to Coudet leaving, not being fired. Payment issues, locker room problems and a dip in Xolos’ form all likely had a big influence in the “mutual” termination of Coudet’s contract with Xolos.

Should El Tri be looking at players like Jonathan Gonzalez, Angel Lopez, Omar Govea for the WC instead of players who prefer to go and play in mediocre leagues?

In my opinion, I don’t think those guys are experienced enough to deal with a key role in the World Cup. Are they potentially good players for the future? Most definitely. Will they be able to sneak onto the WC roster? It’s unlikely but possible. I also think it would be asking way too much of them to potentially put the responsibility of a key role for the national team on their shoulders.

How’s Lobos handling the economics of the club? not to long ago they were asking for donations.

I was wondering about that the other day. Keeping in mind that they’re planning on increasing the capacity of the stadium and looking at new players to add, my guess is that any financial problems have now been put to rest…for now.

This is one of those rare moments when I genuinely don’t have an answer! I haven’t taken the time to fully review their draft options and I need to soon start getting ready for the Copa MX final haha. My guess is that it won’t change significantly and you’ll still have key players like Cota, Chapo, Orbelin and Pizarro in the XI. Gael Sandoval and Ronaldo Cisneros have the potential to mix things up and steal a starting role, but my guess is that they will be rotation options.

Can you explain in layman’s terms the “pacto de caballeros?”

Longer summary: It’s a non-written Liga MX rule that club owners follow. When a player has finished his contract, he isn’t allowed to freely move to another Liga MX team (which he should be able to do). Instead, almost as if the contract never ended, there has to be a deal between his old team and his new team.

The problem is that there is only one FIFA break between March 19th-27th. That means that JCO might not be able to utilize European-based options during friendlies that don’t land on those days. There will obviously be some friendlies closer to the World Cup that the best options will be able to attend, but with the U.S.-based friendly in late January, he’ll have to stick with a Liga MX-heavy roster.

Will Carlos Vela maintain his level at LAFC?
Do you think they made the right decision as the Dos Santos? Double Whammy!

As mentioned before, I think Vela will do fine with LAFC but I don’t think he will be playing at the same level that we once saw a few years ago. As for the Dos Bros, I would be more okay with their decision to join MLS if it was made after the World Cup.

Then again, soccer careers are short and they have the freedom to make those decisions. They have a very short window to make that money and I would also feel conflicted about staying in Europe or moving to the United States if I was them.

With Chicharito taking a back-seat with Moyes in charge now, do you see him moving somewhere else during the summer?

I think we still have to wait and see about Chicharito’s situation. He recently returned from an injury and could have easily been in the same situation if Moyes wasn’t in charge. However, will he leave if he doesn’t end up earning a starting role? If that continues, I wouldn’t be surprised if he left West Ham after the World Cup.

Senpai, who do you think Osorio will call-up in January's friendly vs Bosnia? The usual players like Araujo, Gallardo, Aquino, Peralta or maybe give other players like Guzman, Hugo Glz, Elias, a chance to prove themselves? pic.twitter.com/Lg9syQyucZ

Let’s play a fun game and try to guess the players he will call-up. Could be 23, could be 26, but let’s go with 23 and see how many of these end up being called.

#AskCesar: Round Table Pizza, relegation and Scottish mascots
The final #AskCesar of 2017!
To Top