Welcome to another edition of #AskCesar!

In case you didn’t notice, we have officially moved this weekly article to Thursdays. SO, if you want to take part in the next one, be sure to send me your questions on Twitter every Wednesday! I select three for a video preview and then answer the rest here.

Let’s see what we have this week.

#AskCesar With the field settled who is your pick right now to win the World Cup? Dark Horse?

The favorite has to be Germany. The team is head and shoulders above the rest in the world and has an incredible amount of depth. Dark horse? I’ll go with Colombia. Although Los Cafeteros had some problems during qualifying, the squad has plenty of exciting talent within the roster.

Any chance San diego gets a friendly before the WC?

There’s a chance, but I think it’s unlikely. Although more can potentially be added, at the moment, there is one friendly scheduled for San Antonio in late January, a farewell game in the Estadio Azteca and plans for at least two games in Europe. Let’s see what other news develops in the near future…

What do you expect from Club America? This season and the next.

This season: I see them as potential candidates for the title, but I can’t imagine them getting past Monterrey or Tigres if they go up against either side.

Next season: I can see them slightly getting better. Young names like Diego Lainez, Edson Alvarez, Carlos Vargas and Guido Rodriguez are only going to get better. That is, assuming nobody leaves over the winter.

Maybe? I don’t know, I think it all depends on the scenario, game or season. In the current 2017 Apertura, I do wonder if Chivas fans are having a difficult time celebrating those losses for America.

What are your pro club stats looking like this year? #AskCesar

“Bad Hombre” is doing alright as a defensive midfielder right now. I think he’s at an 87. I’m more of a box-to-box guy and have a decent shot from distance but I also mistime too many tackles. I should probably play some more.

Is it true that if you don't use it, you lose it?

This sounds like a question for Loveline. Somewhat of a tangent, but I used to listen to Loveline on KROQ during my teenage years. My Catholic parents obviously didn’t like that.

What in the world are we going to do with Mexico's defense? Jesus Christ

The harsh reality is that it might not get any better than this. I know some fans are calling for more true fullbacks to be given a chance, but I don’t think adding in a name like Paul Aguilar, “Chapo” Sanchez or “Dedos” Lopez will do much to drastically improve the backline.

Fans will need to pray that key players like Hector Moreno and Miguel Layun remain healthy.

Will Jiménez leave Benfica to join a club where he might see more playing time? #AskCesar

I haven’t looked into those rumors much lately, but I don’t think so. It seems as though he will continue to fight for minutes in Portugal with Benfica.

All depends on the opponent. That said, against a tough opponent, I think Osorio will go with an XI that looks very similar to the one used against Belgium. Not my ideal XI, but this is what it’ll probably look like. 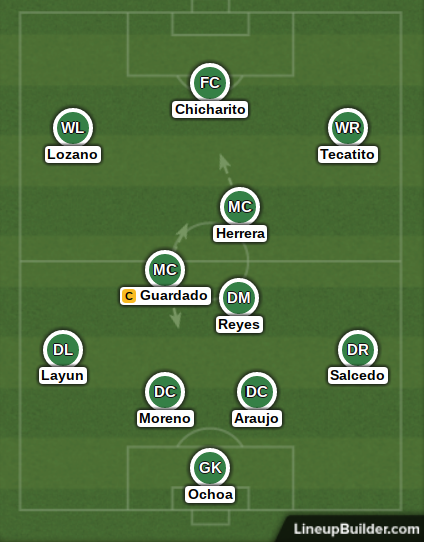 2%, maybe lower. Yesterday on Twitter he basically called-out a report that said he wanted to return to Chivas and said that the report was “completely false.” He also just arrived to West Ham. If he does leave, it’ll be after the full season.

How far do you think Mexico will go on the World Cup?

thoughts on the non-qualifiers possibly holding an alternate tournament/exhibition next summer.

I don’t know. There’s a part of me that recognizes that it does little to help U.S. soccer, but there’s also a part of me that also thinks it would be really fun. Also, I don’t get the people who are genuinely furious about the situation or who take it very seriously.

It’s the short-tournament format. We get more exciting soccer because each game has more importance but it comes at a price. If a team only has 17 regular season matches, why give opportunities to young players when you can buy a name with more experience who will give you immediate results?

It’s not a popular opinion, but I like the idea of keeping the playoffs at the end, but having a full 34-game season instead of having the year split up into two tournaments.

Are you happy Honduras lost to Australia?

I was rooting for them. I know they probably would have had a very difficult time next summer, but I always appreciate seeing other CONCACAF teams in the World Cup.

Are you a fan of the current Copa MX format? If not, what would you change to make it a better/more exciting tourney? Personally, I’d like to see it be a knockout tournament from start to finish with inclusion of most/all Ascenso teams…

I clearly love watching Liga MX but don’t really care about the Copa MX until the knockout stage. Your idea is similar to the one I have: Immediately go into the knockout round. Also, like the U.S. Open Cup, I think it would be awesome to have amateur, semi-pro and lower-league clubs in the early stages of the tournament.

Also, it would be fascinating to invite MLS teams as well.

do you think Omar Govea earned his way onto the MNT? or do you think a player like Elias Hernandez should have been on the squad instead…I ask bc there was a journalist in Mex who said Omar didn't earn his way on the quad. #280characters #askcesar

Govea earned the call-up but hasn’t earned a place in the national team just yet. If that makes sense. He adds some nice depth to the midfield and was rewarded for his risk-taking move to Porto’s B team and his current successful loan in Belgium. In the end, I don’t think there will be space for him in the World Cup roster but I appreciated seeing him get minutes.

Elias has been brilliant in Liga MX and he’ll get his chance to shine in the late January friendly for Mexico. If he doesn’t get a call-up then, that’s when media and fans should start asking questions.

Will not playing the important European games hurt Tecatito in any way? His form or his place in el Tri?

Not at all, he is still an irreplaceable member of Mexico’s national team. On paper, an attacking trio of Lozano-Chicharito-Tecatito is the best available for El Tri.

Cesar! Who is coming to play mexico in Texas so that I can go watch them? And chucky Lozano, will he leave PSV at end of season? Or too early to call?

Not sure if you already heard the news, but it will be Mexico vs Bosnia & Herzegovina on January 31st in San Antonio. It doesn’t land on a FIFA date so that means that the squad will probably be very Liga MX-heavy and will include some of the MLS guys.

As for Lozano, it’s still too early to call but plenty of English teams are keeping an eye on him. A good World Cup will probably guarantee a transfer.

Can I be on your futmex show?

Apologies good sir, can’t do that. We are inviting random guests onto next Monday’s Mexican Soccer Show, but they are contributors to our Patreon page. Maybe it’s you if you’re already a member! Or maybe it will be you once we randomly select more patrons in the near future!

Which team do you think the dos Santos brothers go to on loan?

IF it happens (and that’s a big IF), all signs point to either Monterrey, Tigres or America.

Would you bring back Marquez to the team? If so would you play him as cb or cdm? My concern is whether or not he can last the full 90 min (and hopefully 120 mins) Feel like he could keep the backline organized from being teared apart.

If all of his off-the-field stuff is resolved, I would. I wouldn’t play him, though. What I would do is bring him to the World Cup as a leader in the locker room and a back-up to the DM position.