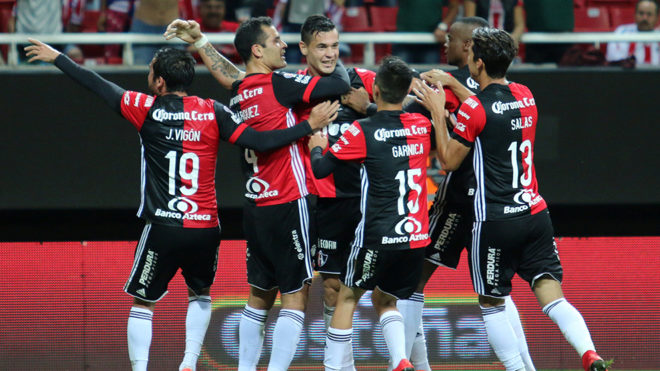 Defeat in the Guadalajara derby capped off a miserable title defence for Chivas, who’ve struggled to re-discover the form, style and morale that made them Liga MX champions last Clausura.

Over at cross-city rivals Atlas, it’s been a much more successful campaign. There was a mid-season slump as the loss of pivotal midfielder Clifford Aboagye, along with the Rafa Márquez controversy, took its toll, but a run of one loss in eight has Los Rojinegros in a play-off position as it stands. It’s also moved them above Querétaro and far beyond Veracruz in the relegation table.

Milton Caraglio was the hero on Saturday, scoring both goals in the two-one win at Estadio Chivas. His first was a scuffed effort that bounced in, after a superb run by Brayan Garnica. The second was a wonderfully cheeky panenka, not what you’d expect from a target man who won 12 duels against Chivas.

Organised, capable of playing with four or five at-the-back, and always a threat in wide spaces, Profe Cruz has done a good job with Atlas. Making back-to-back liguillas whilst, on paper, a stronger Pachuca side has been missing out would be a real success.

Should Diego Alonso be under major pressure?

Four defeats in six matches had put Cruz Azul in major danger of missing out on yet another top-eight finish. Victory on Friday was a must, and thanks to Felipe Mora’s two first-half goals, La Máquina earnt the vital three points.

Paco Jémez’s side aren’t significantly better than Cruz Azul teams of recent seasons, but crucially they now have someone up-front who’s capable of finishing chances. With a goal for every 10.6 shots, Cruz Azul are ranked in mid-table for this statistic. In previous seasons, they’ve sat near the bottom of Liga MX for shot efficiency.

Felipe Mora has been the main player responsible for improving this vital stat. The summer addition has averaged a goal every 3.3 shots this season, a very impressive level of efficiency.

The Chilean bagged both goals in Cruz Azul’s two-one win against Morelia on Friday. Both were classic poacher’s goals, coming just inches from the goal-line.

His all-round influence on La Máquina’s build-up play is extremely limited, but he’s doing an excellent job of finishing off getting into dangerous positions and finishing off chances created for him. The long-awaited return to liguilla may come next week.

In a match where Veracruz managed to hit an extraordinary 19 shots off target, but just one on target, Alexis Canelo’s rebound effort gave Toluca an important three points.

Los Diablos Rojos have been in the play-off spots for the majority of the campaign, but a couple of disappointing defeats put pressure on Toluca’s liguilla place.

Veracruz, who haven’t won since Spetember, gave Toluca an excellent opportunity to get back to winning ways with their inability to hit the target, and Canelo’s goal got the job done.

For Toluca, Rubens Sambueza, back on the wing with the return of Pablo Barrientos, was extremely lively, completing six dribbles and five key passes. Meanwhile, Santiago García was once again outstanding at the back. The summer addition prevented ten Veracruz attacks with blocks, interceptions and tackles.

Whilst things look more promising for Toluca, Veracruz face worrying times. José Cardozo has now lost five of his seven games in charge and with Lobos picking up surprise results, Veracruz are rooted to the bottom of the relegation table. Considering Cardozo’s recent record with Chiapas and Puebla, he’s unlikely to be the man to solve their crisis.

Golazo of the week