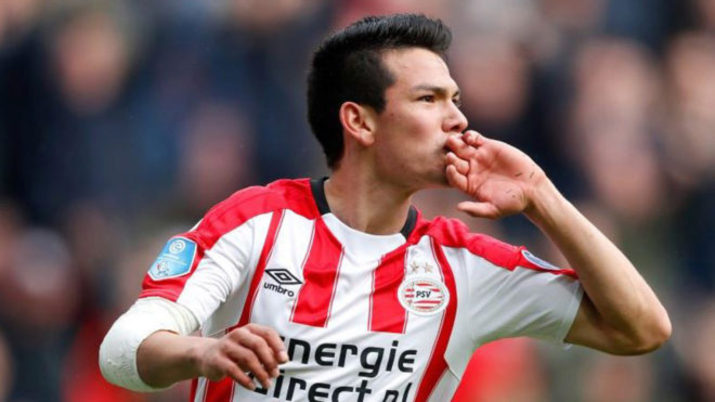 ‘Chucky’ Returns With A Bang

Hirving ‘Chucky’ Lozano cannot be stopped. After suffering an elbow injury during Mexico’s World Cup qualifier match against Trinidad & Tobago October 6th that left him temporarily unable to play, the Mexico striker did not seem to miss a beat when he returned to PSV on Sunday morning. In just the 18th minute of play, Lozano would capitalize on an opportunity inside the box and sail the ball into the back of the net.

He now has seven goals in seven games and is the leading goalscorer in the Eredivisie. This has been a great journey for Lozano’s debut season in Europe and if he keeps on the right track, he can potentially see a great move to a bigger club soon enough. He should definitely stay in the Eredivisie at least one more season to keep on the right track but it might be a hard decision if the right team comes along sooner.

Mexican midfielder Andres Guardado was given the full 90 minutes in Real Betis’ match against Alaves on Saturday. As has been the case for a majority of the season, Guardado has been a key factor in the midfield for the team. His fluidity and intelligent passes have helped the team open up the space and be more strategic in their playmaking. They ended the match with a 2-0 victory and Guardado is now the league-leader in assists for far in the La Liga this season.

In Porto’s match against Pacos Ferreira, a goal and an assist from Jesus ‘Tecatito’ Corona added to the 6-1 victory the team got on Saturday morning. Hector Herrera was also part of the match, increasing the amount of playing time he is now getting but is still limited for someone who has been on the team for as long as he has.

Unfortunately, for the rest of the PorTRI, there has been even less playing time. Layun is still sporadically off the bench and roster for Porto, the last big moment was his Champions League goal against Monaco back on September 26th. Diego Reyes has had very limited playing time. He did not play in the last two games and with 2018 quickly approaching, our Mexicans Abroad at Porto will need to start getting more consistent playing time.

After weeks of being on the bench, defender Carlos Salcedo is finally receiving the time he needs at the perfect time. In Eintracht Frankfurt’s match against Dortmund on Saturday, Salcedo was subbed in for fellow CONCACAF player Timmy Chandler in the 37th minute and played the rest of the match. Despite the ending in a 2-2 draw, the time allotted for Salcedo will greatly benefit him especially in high-intensity games like the one he was able to get against Dortmund. He has slowly added more playing time and hopefully the streak continues as the season goes on.

While many celebrated Mexican defender Hector Moreno’s move to AS Roma after years of being in the Eredivisie, it has been a rough couple of weeks of being on the bench in Italy. But Moreno was finally included in the starting 11 and played the full duration of the match in Roma’s 1-0 victory against Torino. Hopefully as time progresses, Moreno will continue to get more playing time especially with 2018 and the World Cup just around the corner.

Chicharito Might’ve Made A Bad Move

It has been a series of unfortunate events for West Ham and Javier ‘Chicharito’ Hernandez. The latest match against Brighton ended in a 3-0 defeat. West Ham is currently sitting in 16th place out of 20 in the EPL standings. Many have argued that the level of competition the Premiere League provides has been worthwhile of the place West Ham finds itself but this might also be creating a setback in ‘Chicharito’s’ performance. They have only won three of their eight league matches and much of the chemistry of the team does not seem to sync up with ‘Chicharito’s’ style of playing. There is still time left in the season but it might be worth looking into whether or not Hernandez wants to stay at the club for next season.