#AskCesar is back! If you wan’t to join next week’s article, just send me your questions on Twitter every Thursday. I select three questions for a video preview and then answer the rest right here.

Let’s see what we have this week!

What are your thoughts on chivas this season? Why have they struggled after being champions last year?

I assumed they would struggle, but not at this level. The reason for the problems? Multiple players with a busy summer that featured in the Gold Cup, injuries (specifically Alan Pulido) and a short preseason after winning the championship. It might be too late to salvage much in the regular season, but Chivas do still have a decent chance at winning the Copa MX title.

#askcesar gimme your ?? starting 11 for next summer??? 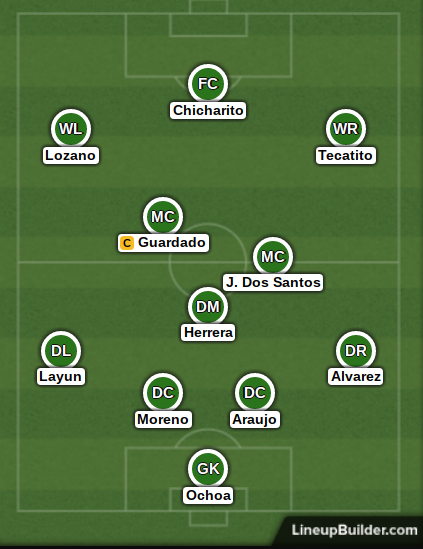 In 10 years how do you think the Mexican National Team will look like? Will it stay the same, grow, or even fall behind? #AskCesar

Hard to predict, but some current noteworthy players like Hirving Lozano, Edson Alvarez, Orbelin Pineda and Cesar Montes will probably be involved. I’m thinking the national team will grow stronger, and certain names such as Diego Lainez, Ronaldo Cisneros and Roberto de la Rosa will be a part of that development.

Why does Hoppy Hour FC keep ducking @tckfc in FIFA18?

Last night, I spoke to the rest of the board at HHFC headquarters. After a lengthy discussion regarding ticket sales and marketing, we would like to officially seek a date in the near future for a much-anticipated friendly. We recently signed a new winger and would love the opportunity to showcase his talents.

2007? That’s a long time ago! I was still a student then and that was one of those years in which I didn’t watch much Liga MX. The fact that Atlante were champions that year says plenty about how long that was haha.

Explain why Fat Joe and any person of Hispanic descent is allowed to say the N word? I guess it's unrelated but that don't make sense to me

What a question that deserves much more than just a simple answer from me in this article. I have so many feelings and thoughts regarding this question, but this video from Flama does an excellent job of exploring it. [Edit: A couple instances of strong language in that video but it’s an insightful and interesting video nonetheless]

Ruidiaz vs Boselli who comes out on top on Friday?

I’m genuinely thrilled for this game. I say both find the back of the net at least once and that this game will finish in an exciting draw.

If Osorio leaves after WC who do you see as the next manager?

If it happens, I’m hoping they go for a big name but I ultimately believe they will bring someone from the league. If Piojo wins a title in the next two seasons, we should expect him to be high up on the list. Tuca is of course another option that will be strongly considered.

What is the most hauntingly beautiful movie to watch in the eerie hours of a rainy night?

Big Fish. I cried at the end of the movie and I’m okay with admitting that.

Is this a question or a prediction? If the Dodgers win the World Series does this then mean that Mexico is going to win the World Cup?

Talk to me about Chivas……
An explanation for their current crisis? “Campeónitis?”?

As mentioned earlier, there are a few reasons why they struggled (injury problems, shortened preseason and a busy summer for key players), but I didn’t think they would be this bad. A Copa MX title is still up for grabs, which could at least help ease the pain of a dismal tournament.

Which will be the better attack in 2022?

Those are both great options, but I’ll go with Lozano-de la Rosa-Corona. To be honest, I wouldn’t be surprised if Raul Jimenez is still very relevant for Mexico in 2022 and earning minutes next to Tecatito and Lozano.

should osorio keep an eye out for osvaldo rodriguez from leon? he's 21, lb. left footed and a frequent starter for leon…

Not a bad option to consider. He seems to have a good future, but I also don’t think he has the capabilities of stealing minutes from Miguel Layun or Jesus Gallardo. Either way, Rodriguez is definitely somebody to keep an eye on, especially if he can continue earning regular Liga MX appearances.